It might be a contrarian opinion, but the 10th spot in fantasy football drafts is one of the more favorable positions in 2020. The early phase locks you into a running back. Middle picks can be volatile as running backs, receivers, and at least one tight end enters the conversation. The 10-spot offers flexibility. Fantasy managers at the 1.10 are less likely to reach on a player as they have the security of the 2.03 selection in five picks. Managers drafting slightly earlier are forced into those decisions and unlikely players can drop. Overall, the 10th pick isn’t about the single selection but the first and second-round picks that you can use to open your draft.

The scoring setting lends itself to drafting dual-threat running backs early and often. Running-back demand has 10 going in the first round according to ESPN live draft trends. However, we need to be mindful of their value relative to the other positions. Tiers will help visualize the comparative drop-off as more players are selected. Once the number of selected players reaches a certain threshold, we can pivot to a position or player with a higher expected output. The process will guide us the rest of the way.

In this article, I will walk through a perfect draft with the 10th pick in a 12-team ESPN PPR league. Each pick was optimized using projections and value-based rankings from the 4for4 Draft Hero tool. 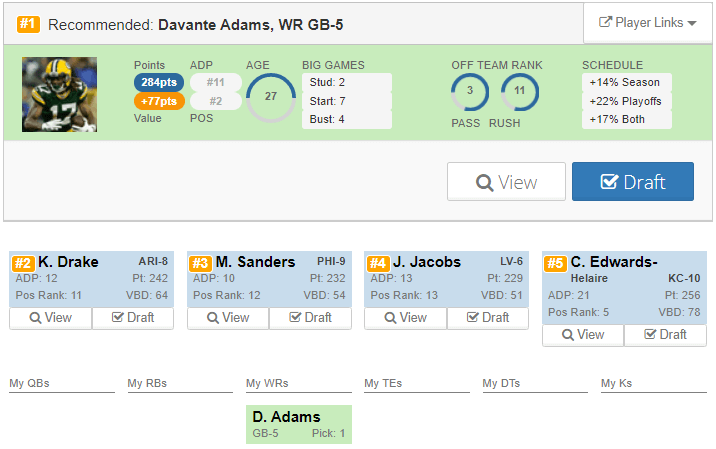 It might not be the best sign of things to come, but I’m already disagreeing with the Draft Hero. Seven running backs had been drafted by the 1.10. John Paulsen has Clyde Edwards-Helaire as the fifth-highest player at his position. The slight drop provided some value I could leverage and await whoever made it back to me in the early second round.

Edwards-Helaire’s skillset is fully realized in full-PPR formats. His 55 targets in LSU’s historic offense pushes him far past the general threshold for evaluating a dual-threat prospect coming into the league. Kansas City passed at the highest rate in neutral game scripts while allocating 19.9% of their targets to their running backs. If the rookie is expected to shoulder most of the load as a runner and receiver, the risk is worth the reward.

Clearly, Davante Adams, as suggested by the Draft Hero, is the safer pick. He has a secure, elite target share in a productive offense. However, I’ll refer to the tier discussion in the introduction. I have Edwards-Helaire in the first tier of running backs. It’s slightly deep but encompasses the first set of pass-catching running backs in productive offenses with secure workloads. Adams is in the first tier of wide receivers. Given my preference for starting with an RB, I sacrificed WR early in the hopes I could draft one in the second round in the tier below.

Draft Hero and I were back on track. Eleven running backs were selected prior to my second pick. With a running back secured in the first round, I could be flexible with my approach. The market has favored Tyreek Hill over Julio Jones, but I had already drafted a player from Kansas City. While bye week consideration and stacking aren’t strategies I avoid, it was worth considering at this stage of the draft. In this case, I decided to go against the market and draft 2019’s WR3.

Jones hasn’t seen a target share under 20% since his rookie season. It hasn’t been below 25% since 2012. Hill might play in the best offense, but Jones’ situation, even at 31 years of age, has the potential to meet his 2019 results. Hill has, at minimum, four other pass-catchers to contend with for targets and hasn’t established himself as the primary read in Kansas City. Jones has secured the alpha role in Atlanta with only Calvin Ridley as the returning player with an established connection with Matt Ryan. The Falcons were third in neutral-passing rate, making Jones a prime candidate to lead the league in targets giving him significant value in the second round.

Study
Injury Profile - Can Saquon Barkley be Elite in 2021?