The sense of FOMO (fear of missing out) pervading the tight end market in re-draft leagues is real, and it's bound to intensify as fantasy footballers accept the following truism: if you don't grab a top tight end, you might as well not play in 2019.

It reminds me of the groupthink around the quarterback position going into the 2012 season: get a great one or you're sunk.

Hindsight analysis and a results-oriented approach are driving this almost unhinged desire for a good tight end option. It's bad process, and one that'll start a thousand Twitter wars this summer. But it invites tight end skeptics—also known as process truthers—to exploit the FOMO that'll have your league mates offering the nah wave to high-volume receivers and running backs at discounted prices in favor of tight ends coming off outlier seasons that have supercharged their re-draft cost.

Today—five months before your fantasy drafts—eight tight ends are being drafted in the first six rounds of re-draft leagues. Last year, there were six tight ends going in the first six rounds. From 2014 to 2017, there were five. And here's the thing: with recent tight end developments, we could see more tight ends enter the first six rounds of re-draft leagues. Someone like Jared Cook, who just signed with the Saints, could rocket into the top half of drafts. David Njoku is hanging on the edge of the sixth round, going at 7.02. Delanie Walker, once declared healthy and ready to resume his role as target hog in Tennessee, could easily jump from the early eighth round to the late sixth round. Even a guy like Vance McDonald, with a little training camp hype and a preseason touchdown or three, could find himself going in the first six or seven rounds come late August.

I would mention Jordan Reed, a 13th rounder right now, but he's ripped out the hearts of too many fantasy players to get a marked draft day bump. Reed, for better or worse, is dead to us.

The driver of this tight end FOMO isn't hard to pinpoint: we saw three tight ends (Travis Kelce, Zach Ertz, and George Kittle) crack the 1,000-yard mark in 2018, with two of those guys—Ertz and Kelce—seeing an absurd 150 targets come their way. Throw in Eric Ebron, fantasy's fourth-highest scoring tight end in 2018, and you get an insane 36 touchdowns scored by the game's four highest-scoring tight ends. It didn't suck to have any of those guys rostered in 2018, and we're seeing the effects of such wild opportunity and productivity.

Never mind that Kittle and Ebron were late-round fliers in 2018, and Ertz was available in the middle of the fourth round and not the end of the second round, where he's being drafted today. Forget that Rob Gronkowski, the first tight end off the board in 2018, was a total bust—a two-ton anchor around the neck of anyone who spent precious draft capital on the recently retired system tight end.

Forget all that for a minute. I wanted to know if opportunity and production have changed for fantasy football's top tight ends enough to warrant the desperate reaching we're bound to see this summer when folks might pass on Odell Beckham, Jr. or Michael Thomas to get Kelce, or JuJu Smith-Schuster to get Ertz. We're going to see people side with Ebron over Cooper Kupp, Robert Woods, and Julian Edelman. Folks are going to happily draft Kittle over Keenan Allen and A.J. Green. Is there any reasonable justification for this FOMO? 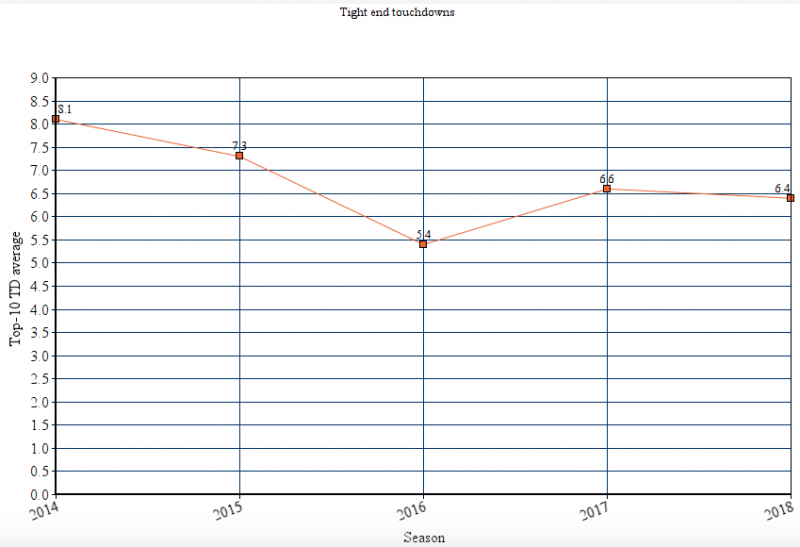 A look at the past five seasons shows that touchdown production among the game's top-10 tight ends has seen a not-insignificant dip since the heady days of 2014, when the 10 highest-scoring tight ends scored an average of 8.1 touchdowns. For the kids out there, those were the days when Gronkowski and the tight end formerly known as Jimmy Graham would score a touchdown on every third reception.

Touchdown production, as you can see, has leveled off among the highest scoring tight ends over the past three years; last year, only Kelce and Ebron reached double-digit touchdowns, the former proving highly dependent on hitting pay dirt. Ebron, in fact, scored more touchdowns in 2018 than he had in his first four pro seasons combined. His 2018 touchdown explosion was cool and fun and nice, and we certainly shouldn't expect it in 2019.

These guys aren't seeing a spike in touchdowns, and the leading touchdown scorer among tight ends (Ebron) started the season as a backup who was available on most waiver wires before Week 1. One of the tight ends fantasy players are primed to take early—Ertz—has a career touchdown rate of 6.6%. As recently as 2016, he sported a touchdown rate around 5%. It was only recently that Ertz became a red zone focal point for the Eagles. In 2016, for instance, he was well outside the top-10 tight ends in red zone looks. Perhaps his role has changed, but his eight scores in 2018 would've seemed jarring to anyone who rostered Ertz in 2015 and 2016, when he turned 201 targets into five touchdowns.

Kelce isn't likely to repeat his ten-touchdown performance in 2018, though it's very much within the range of outcomes seeing Kelce scored eight touchdowns in 2017, with Alex Smith at quarterback. It could be that life with Patrick Mahomes under center means Kelce will continually hit the highest parts of that yearly range of outcomes. Remember though: his average draft position reflects this belief; Kelce is going more than a full round higher than he was in 2018 drafts.

But maybe it's not about touchdown scoring. Maybe the FOMO is about targets, about a jump in opportunity among fantasy's best tight ends, the guys who are ostensibly every-week starters in ten and 12 team leagues.

The mind-boggling 2018 volume seen by Kelce and Ertz aside, the average number of targets for top-10 tight ends has stayed relatively steady over the past five seasons. Last year's target spike—compared to 2017—was bouyed by Ertz, Kelce, and Kittle combining for 441 targets. That's a lot. It's also not a little. But a zoomed out view of opportunity among fantasy's highest-scoring tight ends doesn't reveal anything about tight ends seeing far more opportunity coming their way. 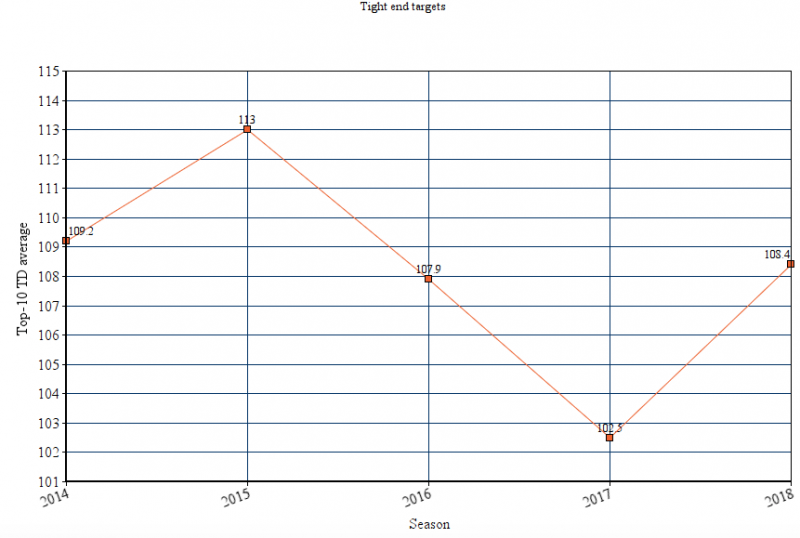 I looked at tight end targets every which way, looking for some indication that opportunity—which reigns supreme in fantasy football—had shifted. Had the tight end position fundamentally changed over the past half-decade as more freakish athletes played the position and became lethal parts of the league's best passing attacks? The answer, again and again, was no.

Probably this analysis is not perfectly applicable to more complex fantasy football formats that include a glut of flex spots and PPR scoring. Snatching up one—even two—of the tight ends going in the first six rounds might be a viable option in such a league. But tight end remains a onesie position (as we say on Living The Stream) in the vast majority of leagues; passing on running backs and wideouts when you need two or three (or four) of each to fill out a lineup isn't what one might call good process. Furiously chasing last season's results, grabbing a tight end in a cold panic as your league mates use their second and third and fourth round picks on the position, also counts as less-than-optimal process.

I'd be remiss -- and I'm never remiss -- if I failed to repeat a Living The Stream mantra: everyone is a value at some point. Am I in love with the average draft positions of the first six or seven tight ends off the board? I am not. But I'd be downright smitten to take one of those guys at a slightly reduced price? Kelce at the end of the first round or start of the second round is too rich for me, but Kelce at the beginning or middle of the third round seems palatable. Kittle at the front end of the third round? No thanks. Kittle near the end of the fourth or top of the fifth? Yeah, maybe. We should never reject a player -- only his price point.

You likely need a single decent tight end option, just as you did last season and the season before that. We've seen time and again that one good tight end is readily available on your local waiver wire in the weeks before Opening Day, and into the first part of the season. A few outlier seasons aside, nothing has changed about tight ends in fantasy football. Yet, we're going to see 2019 drafters treat the position as if it has.

C.D. Carter is the owner of DraftDayConsultants.com, co-host of the Living The Stream podcast and author of "How To Think Like a Daily Fantasy Football Winner".

More from C.D. Carter
Most Popular

Player Profiles
Can Trevor Lawrence Be an Immediate QB1?
by Jody Smith · May 11, 2021
Related Articles