The biggest dilemma fantasy managers are faced with when drafting from the back turn this season is which top WR to draft and who to pair with him. There are arguments to grab a top TE here or a second-tier RB in order to avoid chasing the position for the rest of the draft, but your decision should ultimately depend on specific league scoring and who you’re comfortable with.

In this edition of the Perfect Draft Series, I'll be walking through a perfect draft from the 10th slot in a 10-team PPR league. Each pick was optimized using projections and value-based rankings from the 4for4 Draft Analyzer tool. 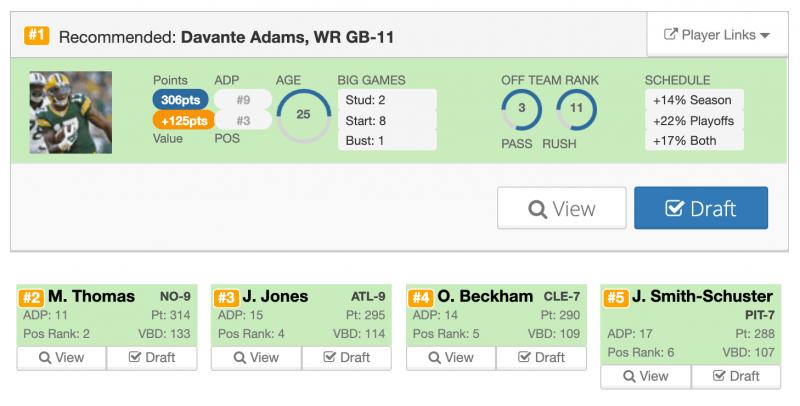 WR was definitely a target for me with this first pick and Adams is certainly worthy. You want your first selection to be rock solid, someone who will produce elite fantasy numbers week in and week out, regardless of matchup. Michael Thomas and Odell Beckham were also in consideration for me here, but I know that being on the turn means I can grab another elite WR with my next pick.

Last season was a down one for the Packers offense as a whole but Adams still posted over 16 PPR points in every single game he played, ending as WR3 on the season in just 15 contests. Aaron Rodgers and his top wideout usually post monster fantasy numbers, and with Adams as the clear No 1. in that offense, we could see even more volume than the 169 targets he saw last year.

Each round, Draft Analyzer suggests the top available suggestion along with four alternatives, as shown at the top of this section. Throughout the rest of the article, I will note those suggestions as well as my top alternative to the player that I actually selected.

Draft Analyzer gives me three WRs and Travis Kelce as their top guys and I agree. I heavily debate taking Kelce here as he’s the clear TE1 this season and projected to post 268 points with a VBD score of +124. VBD or value-based drafting refers to the value of a player compared to the player in front of him. For example, if comparing Kelce and George Kittle, Kelce is projected for 268 points to Kittle’s 259. Their “Values” are +124 and +115, a difference of nine, which signifies that Kelce is projected nine points above the next TE in the draft, which is Kittle. Those numbers also refer to the points above the lowest starter so in this case, Kelce is projected to post 124 more points than David Njoku, the analyzer’s lowest-ranked starting TE.

Despite Kelce’s value here, I choose Thomas based on overall projected points (314), and I feel that in a 10-team league, I can easily draft others to acquire those points along the way. Thomas is one of the safest fantasy players out there and is ranked as WR2 in 4for4’s rankings. He just inked a massive deal with the Saints so looks to be on track for the 2019 season.

This was actually a difficult choice for me, but I ultimately decided on Williams. His small sample size is a bit scary, but in the end, being a lead back in an Andy Reid offense shifted me in his direction. Since I took two WRs to start this draft and both Kittle and Ertz were taken, I decided to grab an RB now so that I wouldn’t have to chase the position for a starter on the next turn.

Williams scored 10 touchdowns over the final six games last season, including the playoffs, averaging 17.5 touches per tilt. Reid has indicated that the sixth-year back has earned the nod as the starter and he should be the bell cow for Kansas City in 2019. While there are other RBs on the board that I like this season, I’m happy with Williams at the top of the third.

Study
How to Identify an IDP Prospect: Defensive Linemen
by Joe Redemann · Jun 11, 2021