Draft strategies such as crossing off the players drafted, reviewing tiers for the next pick and assessing roster construction becomes difficult to implement once we’re on the clock. The core positions (running back and wide receiver) are easier to evaluate given draft capital and position. ADP typically guides the process here, but quarterback drafting can come with a twist. While ADP may set the stage, personal preference can flip any draft on its head leading to selecting a quarterback at the top of their range of outcomes.

“Buy the syrup. Not the pancakes.”

From Rumford Johnny, one of the OG's in the fantasy community, and this is an excellent analogy for describing quarterback value in fantasy. Just look at the number of teams represented in the first two rounds of fantasy drafts. There are nearly 20 different teams with assets in the early rounds. Of those 20, there are at least four with two players taken before the third round (Saints, Chiefs, Browns, and Steelers). With so many high-priced players, the optimal strategy would be to acquire only a single piece of the offense later in the draft: the quarterback. The only issue becomes balancing this strategy with opportunity cost as the draft unfolds.

Risks and Traits of Drafting a Quarterback Early

Fantasy managers take the long view when it comes to drafting quarterbacks. They remember the highlights and big performances and draft for safety. But fantasy football is as much a weekly battle as it is a season-long war with considerations to make each time a roster is set. So even if a quarterback finished as a QB1, it might have been a struggle for them to get there.


Patrick Mahomes’ season is one for the ages, but even he underperformed at times. But even at nine QB1 weeks, that leaves nearly a quarter of the season with replaceable fantasy finishes. It lends credence to the idea that the benefit of an early-round quarterback doesn’t always outweigh their risk. The sacrificed opportunity cost can impact your entire roster depending on when the acquisition is made and ultimately determine your season. 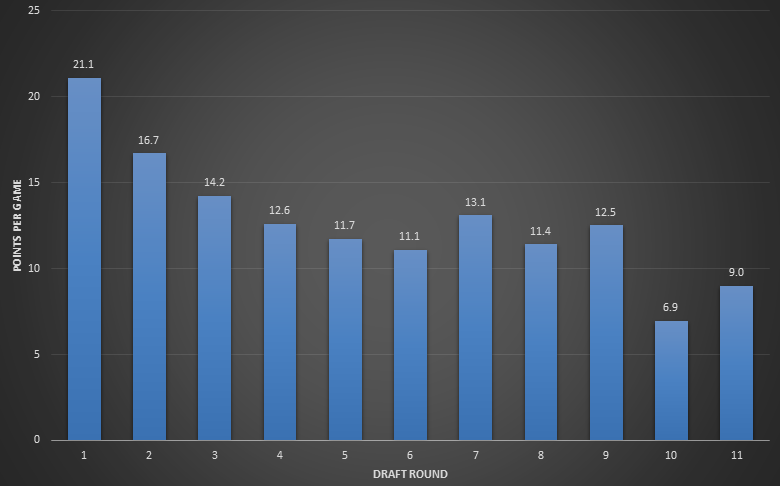 Quarterbacks drafted before Round 4 pose a significant risk to seasonal performance. They’re being drafted at their ceiling or at the top of their range of outcomes. The 40.3% drop through across those rounds is difficult to recoup unless a late-round target outperforms their ADP. By Round 7, the opportunity cost is significantly reduced. By this time, the risk to your roster construction of drafting a quarterback should be alleviated and one can be acquired. But identifying an overvalued quarterback can be difficult once we’re in the draft.


Injury is the main cause of quarterbacks to finish behind their draft-day value, but injuries are unpredictable. However, we can pull some traits by looking at those past disappointments and apply them to the 2019 class.

Now let’s compare those traits against the Top-12 quarterbacks. Using 4for4's ranks, we can identify a couple of overvalued candidates using their 2019 projections and ADP.