Heading into the 2018 season, the first dilemma 1.03 owners face is whether to select one of the two remaining elite volume running backs left from Todd Gurley, LeVeon Bell, David Johnson and Ezekiel Elliott or take Antonio Brown, who has finished as the overall WR1 in four consecutive seasons and second the year before that. Gurley and Bell are likely off the board. David Johnson has 2,000-total-yard upside as he also has an overall RB1 season to his name. Then there’s Ezekiel Elliott, who may have the highest touch upside of any in the bunch this season, with the Cowboys' utter lack of impressive pass-catching weapons. Zeke was the overall RB2 two seasons ago and RB3 in PPR fantasy points per game last season.

In this edition of the Perfect Draft Series, I'll be walking through a perfect draft from the third slot in a 14-team ESPN PPR league. Each pick was optimized using projections and value-based rankings from the 4for4 Draft Hero tool. 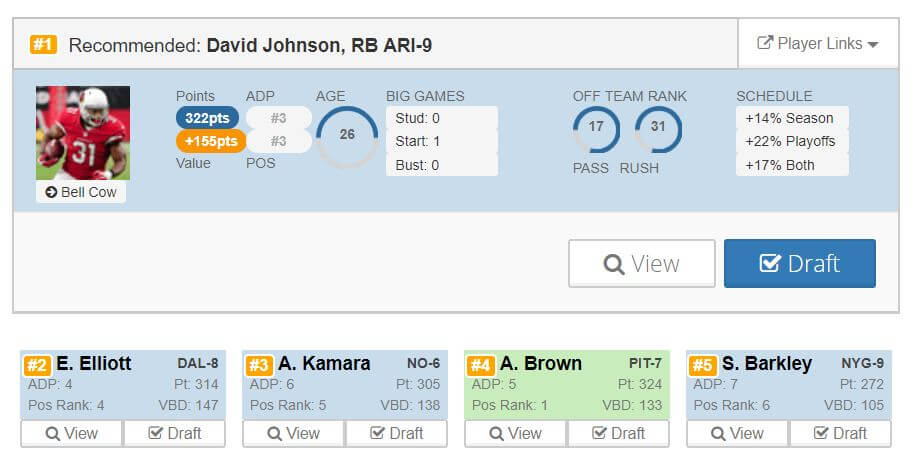 Although Antonio Brown was an option here, I’m opting for an RB in this spot in a 14-team league because I feel the WR choices in the second round will be better than what is left at RB if I wait until the second round to take my RB1. I like safe in the first round. I think Elliott is safer than Johnson this season. Elliott is in line for a monster workload that could near 400 total touches; meanwhile, Johnson is coming off an injury and will play in an entirely new offense (that won’t be as innovative as Bruce Arians' offense) with a rookie quarterback likely at the helm for most of the season.

They both have monster ceilings, but I believe Elliott has the higher floor this season. You can’t win your league in the first round, but you can certainly lose it.

No, this pick was not just made so that our team name can be Hooked on a Thielen. Draft Hero recommended the two elite TEs first here, but I’m passing on them because of where we are in the draft and the ADP data we have. I’m taking a chance that one of those TEs will make it back around to us in the third round.

Ertz has an ADP of 34, and we pick again at 31. Plus, Thielen was among the league leaders in targets and receptions last season, with plenty of room to improve on his four touchdowns with a better quarterback running the show in Kirk Cousins this season.

And there it is! Our gamble paid off. Ertz is still on the board. Why are we taking a TE early? Because of the massive gap in our projections between the top three TEs and the rest of the TE field.

First of all, Ertz is actually our No. 2 projected TE in PPR, but if we look at the points for the No. 3 projected TE (212 PPR points), you’ll see a massive drop to the No. 4 projected TE (156 points). There is no greater gap between two players back to back in the rankings at their position this season. An elite TE also becomes more valuable in a 14-team league, as it’s a positional advantage over more teams that don’t have a reliable TE.

There are some offensive line concerns here, but those are offset for me by Miller’s likely touch volume. In the weeks Deshaun Watson was healthy last season, Lamar Miller was RB12 in PPR points per game and averaged 19.6 touches per game. Plus, Donta Foreman is still recovering from an Achilles injury that could take him half the season to get back to his usual self.

I also opted for an RB here, because I’m a firm believer that it is far easier to find WR2 options later in drafts this season than it is to find reliable RB2/RB3 options. I think this draft will illustrate that in later rounds.