Over the years, one of the most asked questions of me when it comes to 2QB leagues is what to do if you draw the first overall pick? The natural inclination is to select a signal-caller since you are required to start two of them. However, over the years, due in part to the passing boom in the NFL and the depth of the quarterback pool, going quarterback first overall is not such a slam dunk proposition. Waiting to see how the next 18 or 22 picks go before you're on the clock in round two can be excruciating if you forego quarterback at 1.0. But the reward could be immense. That's exactly what I decided to do in this Perfect Draft. I wanted to show readers how a roster in a 10-team 2QB league could look when bypassing quarterback in round one.

In this article, I will walk through a perfect draft from the one hole in a 10-team 2QB half-point PPR league on ESPN. Each pick was optimized using projections and value-based rankings from the 4for4 Draft Hero tool. I also selected 2QB PPR as the ADP Source (which you can switch to before you draft in the General Manager settings). For more resources on how to draft in 2QB leagues, check out the 2018 2QB/Superflex Draft Guide over at TwoQBs. 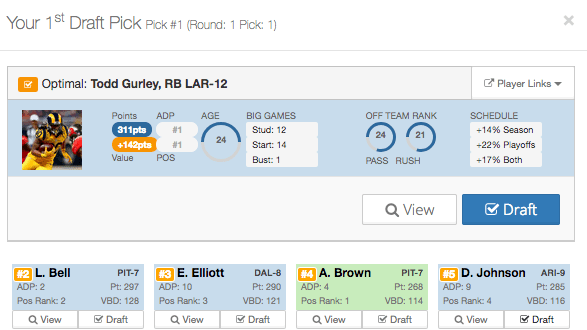 Many analysts are yelling from the mountaintop that there are four elite fantasy backs this year: Todd Gurley, LeVeon Bell, Ezekiel Elliott and David Johnson. But for me, there is only one: David Johnson. The projections on this site have him fourth and Draft Hero recommended four other players ahead of him.

Even though Johnson virtually missed all of last season with a wrist injury, it's hard to forget what he did in 2016. In half-point PPR leagues, Johnson was second behind only Aaron Rodgers in overall fantasy points and points per game of any player who played 16 games. Not only did Johnson rush for over 1,200 yards and 16 touchdowns, but he also caught 80 passes for 879 and 4 touchdowns. A player with that large of a role within an offense deserves consideration of the number one overall pick in fantasy drafts. 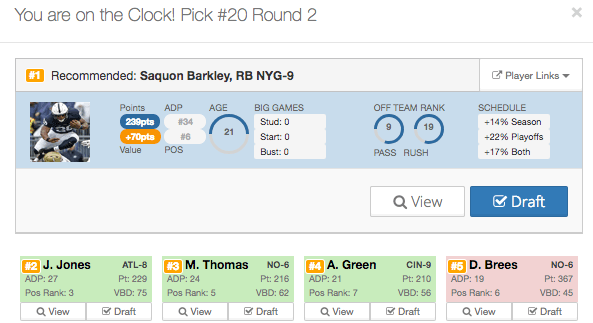 Okay, so the plan to not take a quarterback at the 1.01 pick paid off beautifully, as only four signal-callers were selected with the 18 picks between the 1.01 and 2.10 selections. Now the decision was whether to ignore the QB position with these next two picks, knowing it would be another 18 picks until I was on the clock again in round four or to take a quarterback (or two) and not worry about the position for a large stretch of picks. Seeing who was available at RB and WR solidified my decision very quickly.

Years of drafting in 2QB leagues has provided me insight as to how drafts play out. The one thing about the added value to the quarterback position because of the supply and demand that comes with having to start two signal-callers instead of the traditional one is that while QBs are taken higher, talented skill players who don't pass the ball fall. Which happened to be the case here. Since four QBs in total went in rounds one and two, that meant four players you normally wouldn't have an opportunity to draft in the late-second/early-third rounds of drafts are there for taking. And in this case, Draft Hero recommended Saquon Barkley, this website's sixth-projected running back. The fifth-projected RB, Alvin Kamara, was taken with the fourth overall pick, so Barkley represents a massive value at the tail-end of the second round. 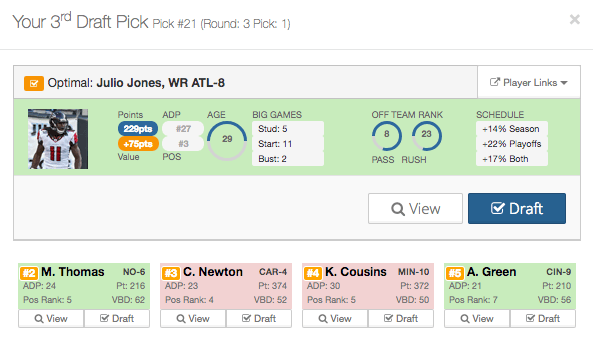 2018 has gone back to the golden age of fantasy running backs dominating the early rounds of drafts, and after taking an old school RB-RB approach, it was time to shift gears and focus on the WR position. With four passers going in rounds one and two, I take the gamble here that I can skip out on QB yet again and still land a top-10 or top-12 signal-caller at the round 4/5 turn. With quarterback not being a consideration, and having already rostered two running backs, drafting the best available receiver made the most sense. And luckily for us, we were presented with the option of Julio Jones or Michael Thomas. Yes, that same #NeverJulio. Jones was second in the league last season with 1,444 yards and was fourth at the WR position in overall fantasy points in half-point PPR leagues. He has caught at least 1,400 yards in each of the past four seasons, averaging slightly over 1,579 yards during that time span. Yes, much noise has been made of his scoring only three touchdowns last year, but our own TJ Hernandez believes Jones is in store for positive touchdown regression in 2018 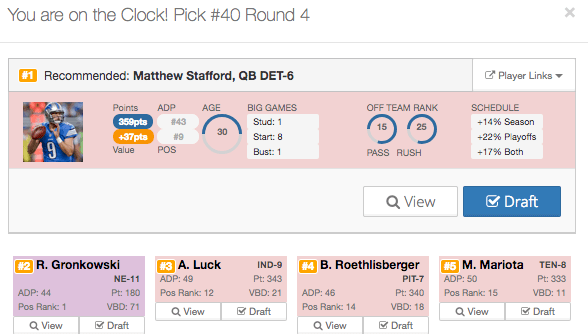 Now came the point in the draft where it was time to seriously consider a quarterback. My quarterback drafting philosophy in 2QB leagues is that I want to at least come away with one of the QB1 options. I am willing to grab two top-end signal-callers if the price is right. But as long as I can solidify the QB1 slot on my roster, I'm confident enough in my drafting abilities to grab two or three middle-to-late round quarterbacks and stream the QB2 position—this is a strategy I have dubbed Studs & Streaming. By the time I was on the clock in the fourth round, an additional seven quarterbacks had been taken, making that 11 in total drafted in the first four rounds. Luckily for me, a couple of my top quarterbacks were still on the board at this point in the draft, one of which being Matthew Stafford.

However, I opted to take Rob Gronkowski instead. Grabbing one of the top-three tight ends in the fourth round felt too good to pass up and allowed me to strengthen my roster with top-three options at each skill position outside of quarterback.

Continue reading to see how the rest of Sal's roster shakes out and to see which picks he deemed to be the best and worst values of the draft, as well as any final takeaways that may help you on draft day...

More from Sal Stefanile
Most Popular

Betting
SharpClarke's Week 4 Betting Recap: Are the Bengals Back?
by SharpClarke · Oct 05, 2022