Every position matters in fantasy football. The amount of points your defense/special teams scores could be the difference between winning the Milli-Maker or sitting alone listening to Lil’ Wayne’s A Milli, lamenting over what could have been. Sounds easy, but how do you go about making the best defense/special teams selections?

Editor's Note: If you open a new account on FanDuel with a minimum $10 deposit, you’ll receive a free one-year subscription to 4for4! Details here.

Defensive and special teams touchdowns are very valuable because they’re worth a lot more points than any other type of fantasy scoring play for a D/ST. Those touchdowns are rare, however. Only 169 have occurred over the last two seasons combined, which works out to an average of 0.17 per game for each team.

Since touchdowns are difficult to predict, the best way to maximize your chances are to try and maximize exposure to the plays on which a defensive touchdown can occur, namely sacks and interceptions.

The statistic most likely to predict interceptions is completion percentage, according to a recent study2. To make sure this is actionable information, I used my aforementioned quarterback sample to calculate the correlation between completion percentages in year y and year y + 1.

The NFL average completion rate is 61.6 percent over the last two seasons. Table 2 below shows some quarterbacks to target for interceptions in 2015, based on their cumulative completion percentage over the past three seasons.

The average sack rate was 0.070 over the last two seasons. Here are some quarterbacks to target for sacks in 2015.

Blake Bortles and Geno Smith appear on both lists and are prime targets (if Smith even gets his job back after being the target of a sucker punch). A quarterback like Russell Wilson is not, however, because the Seahawks are rarely in negative game script, which as you’re about to see is crucial when assessing the viability of a defense/special teams selection.

The more a team is in negative game script, the more it will pass, which benefits the opposing defense from a fantasy perspective (as you can see in Table 4 below).

The average NFL team passes two-thirds of the time while trailing – 35 percent more than they do while leading. More passing plays lead to more interceptions, as picks occur nearly twice as much when a team is trailing compared to when it is leading. Teams also give up 50 percent more sacks when trailing.

Vegas lines are sufficiently accurate to be used to project game script, and ultimately defensive production. Combining a game’s Vegas point spread and over/under gives you the amount of points Vegas projects each team to score. As you can see in Table 5 below, the less points Vegas projects a team to score, the more fantasy-friendly production you can expect for the opposing defense.

Vegas’ accuracy is remarkable and should be the backbone of your D/ST teams selection process. Ideally, you would like to target teams with low projected totals who are underdogs. Table 6 below shows the difference between favorites and underdogs in sacks and interceptions allowed over the last two seasons.

Underdogs surrendered 23 percent more sacks per game and 14 percent more interceptions per game than favorites. Throughout the season, there will be many times when a bad team plays a worse team. The team with the advantage will likely have a depressed salary because they have mostly performed poorly up until that point, but they would offer value in that particular game in which they have the advantage. Season-long fantasy owners will be familiar with this concept, which is the backbone of “defensive streaming”. 4for4’s ‘Law of Averages’ report averages a team’s offensive stats with the stats allowed by the opposing defense, which along with Vegas lines can be used to highlight when a defense has the upper hand in a matchup.

The home field advantage that exists in the NFL has an impact on defensive production. Defenses at home allow fewer points, sack the quarterback more and pick off more passes, as shown in Table 7 below.

Home field advantage will be accounted for in the Vegas lines, so you don’t have to avoid a road team with a favorable situation. However, your defense/special teams playing at home is the ideal scenario.

D/ST scoring is very volatile from week to week. You might recall consistent fantasy performers are ideal for maximizing your floor in cash games, while volatile players help boost your ceiling in tournaments. 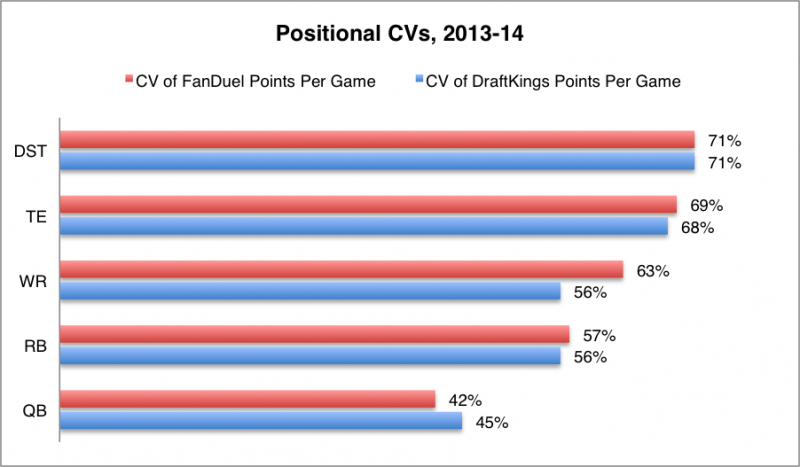 The inherent volatility, low-scoring nature and lack of differentiation between defense/special teams dictates investing the least amount of salary possible into the position in cash games. A bottom-up approach should be taken, where you start from the bottom of the defense/special teams salary list and aim to select the cheapest possible good value.

In tournaments it is more acceptable to pay a little more for a defense/special teams. I say “a little” because the position gets most of its value from its opposing matchup and projected game script, so there are usually cheap alternatives with good matchups on a weekly basis. Nevertheless, when choosing between multiple defense/special teams options at different price points, tournaments are the time to pay for more expensive options if they project for lower ownership.

It is also worth noting defense/special teams have higher ceilings than kickers (who tend to be similarly priced), which intuitively makes sense because they can score touchdowns while kickers cannot. Kickers tend to be more consistent and have higher floors, however, because they can’t score negative points.

Punt return yardage per game, specifically, has a statistically significant 0.46 correlation3 to defense/special team fantasy points. Correlation does not imply causation, of course, but the moderate relationship does highlight the importance of game script and good field position to a D/ST’s fantasy success. The team with the defensive advantage in a given game will force more punts, giving a punt returner more chances at taking one to the house. Speaking of which, when seeking value in punt returns, target returners who don’t call for many fair catches. Certain teams value ball security over return yardage on punts, and their returners will often call fair catches.

Film study can also be helpful in analyzing special teams to assess return teams and coverage units. You want to target punt coverage units who allow a lot of returns (rather than fair catches) and those who miss a lot of tackles. On the flip side, look for return teams who seem to be “on the verge” of taking a punt to the house. These types of situations will not always be apparent, but can provide a useful edge when deciding between multiple similar options in a given week.

Best Ball
Underdog: How to Handle a Slow Draft If You Lose a Player
by Chris Allen · Jul 02, 2022