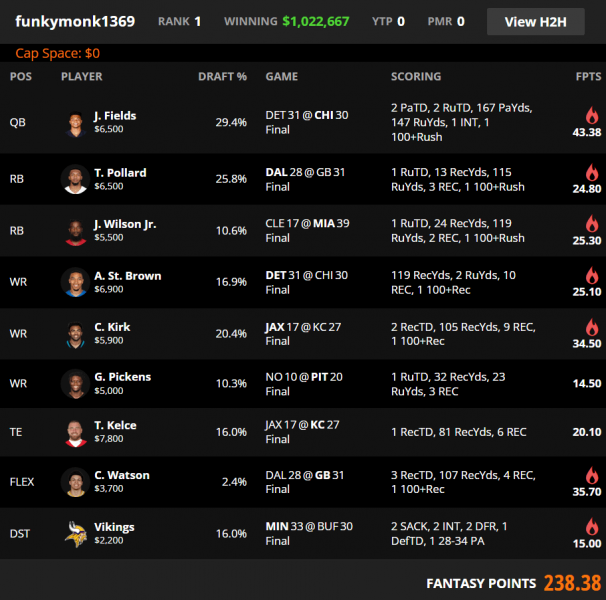 This week’s winning lineup had just one player with sub-10% ownership. It's only the third such winner since the beginning of 2019.

The 147.8% cumulative ownership was the third-highest for a winner and the seventh-highest of any winner since the start of 2019.

This was also just the third Millionaire winner since the beginning of 2020 to play their QB unstacked, although this did have Amon-Ra on the other side.

Continuing the trend, every winner except for one this year has used some form of correlation with their tight end.

Top-1% lineups flexed running back 31% of the time. Since Week 4, top-1% lineups have flexed RB more than the field in every Milly.

The obvious differentiator here was Christian Watson. We projected Tony Pollard for much lower ownership but if you thought Pollard would be popular, Watson worked as a correlation play to offset that high ownership. With Romeo Doubs out, there was opportunity for an increased role.

Tyreek Hill and Jaylen Waddle were both in nearly 20% of lineups while Tua Tagovailoa was one of three quarterbacks with double-digit ownership, making Jeff Wilson a great leverage play. 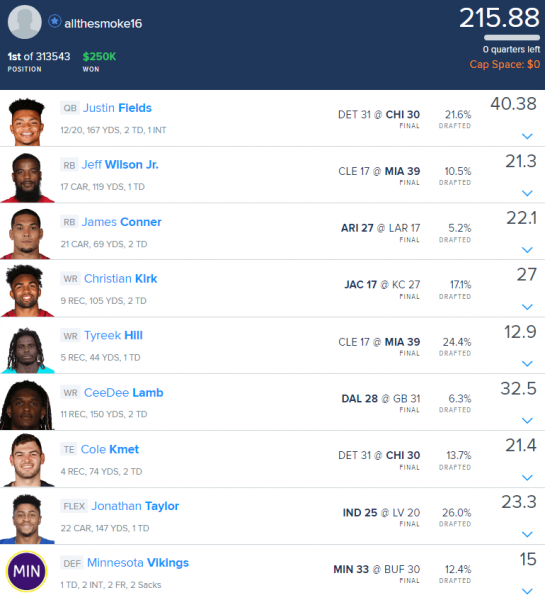 Yesterday's #FanDuel Sunday Million winner had no players with ownership below 5%. That has happened eight other times since Week 1 of 2019.

The 137.2% cumulative ownership was the second-highest for a winner this year.

A correlated tight end has been in nine of 10 winning lineups.

For the eighth time in 10 weeks, the Sunday Million winner flexed a tight end but this was a good week for wide receiver with six of the top 10 lineups playing four receivers.

With Colt McCoy starting, it made sense that the Cardinals might lean on their run game but after James Conner played 71% of snaps in his first game back from injury, it was unclear what his role would be in Week 10. He also led to a unique build with no running backs priced below $6,500 projecting for much ownership.