After what feels like an incredibly long offseason, we are finally within hours of NFL football. Pick'em and Survivor pools are an integral part of the fantasy football landscape, and this weekly article will give you the info and resources to dominate any pool, whether it’s your office fun pool or a massive entry high-stakes contest.

With the help of PoolGenius' customizable tools and data, I’ll go over the best value picks for Week 1, along with the top suggestions for Survivor pools.

Last season my picks in this column went 62-23. I will warn you that historically Week 1 has been my worst, but hopefully, 2022 will turn that around.

Before I get into the picks, note I’m not suggesting you should make all of the picks listed below. The best Week 1 picks for your NFL pool depend on strategy factors such as your pool’s size, rules, and prize structure, plus situational factors like your current place in the standings and the number of weeks remaining.

However, these picks do provide some of the best opportunities to differentiate your Week 1 picks from your pool opponents by taking on only a modest amount of risk, or no additional risk at all.

The Lovie Smith era in Houston has begun, and they’re looking at rebuild mode for 2022. Matt Ryan has taken over the signal caller position for the Colts and should have their way with their AFC South division rival to start the season.

Indy is a full touchdown favorite on the road in this contest, with PoolGenius odds set at 77% and Vegas coming in at 75%. The public is backing the Colts in this matchup 90% of the time, so you’ll win or lose with the bulk of your pool.

It’s a new era for the Giants, but there are still plenty of question marks heading into 2022. The Titans were the No. 1 seed in the AFC last year, and Derrick Henry is healthy. This should be a low-scoring contest, with Tennesee controlling the game at home.

With a spread of 5.5 points, the Titans are projected to win this tilt and are given 69% odds by Vegas and 64% via PoolGenius. If you pick Tennesee, you’ll be joining 93% of the public.

We’re blessed with several revenge games in Week 1, and this one is setting up to be a doozy. Russell Wilson heads back to Seattle to start us off this season, armed with talented weaponry and a solid defense to boot. The Seahawks ranked 31st in pass defense last year and were left with quite the QB pickle without Wilson at the helm.

The Broncos are 6.5-point favorites on the road in Seattle, with 75% win odds via PoolGenius and Vegas odds currently set at 71%. Public bettors are rolling with Denver 88% of the time, which is high but still lower than the games with similar spreads like Baltimore (95%) and Cincinnati (90%).

In our second retribution contest of the weekend, Baker Mayfield hosts his former team in Carolina to start the 2022 season. It was not exactly a rainbows-and-unicorns parting for Mayfield, so we have to think revenge has been on his mind since the Browns traded for DeShaun Watson. Cleveland does have a talented roster, but this one is fated for Mayfield along with Christian McCaffrey, D.J. Moore, and an upgraded offensive line to get the edge. There’s also the fact that the Browns have not won a regular-season opener since 2004.

The Panthers are favored by 1.5-points in this one, with just 53% odds to win. You’ll be picking with 71% of the public if you click Carolina.

This game has a two-point spread with Green Bay as road favorites, but it could be more of a pick’ em situation, with Vegas odds currently 52% for the Packers and 48% for the home team. This selection of Minnesota is not a huge upset, but with only 37% of the public taking the Vikings, it could make sense as a value choice in season-long pools.

Kirk Cousins is surrounded by talent and now has a coach who doesn’t hate him or the idea of throwing the ball. Aaron Rodgers lost his best weapon, and it may take a game or two to find anything similar to the chemistry he had with Davante Adams.

The last piece of the survivor pool puzzle is future value. If you fire off a powerful team in Week 1, you won’t be able to use them later. 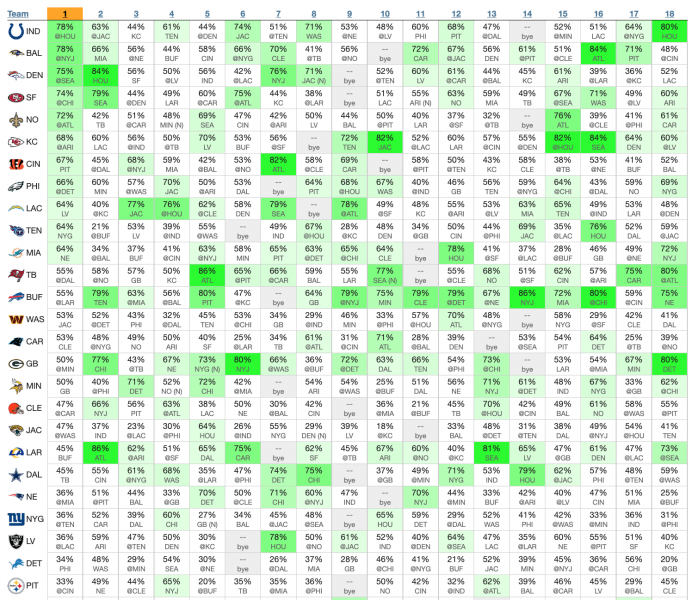