Week 17’s winning lineups from the biggest contests on FanDuel and DraftKings can be used to tease out lineup-building strategies and offer clues on how you could have landed on a similar team. Reviewing your hits and misses each week is imperative if you want to be a profitable DFS player but examining winning lineups is also a useful exercise in cultivating a winning approach. 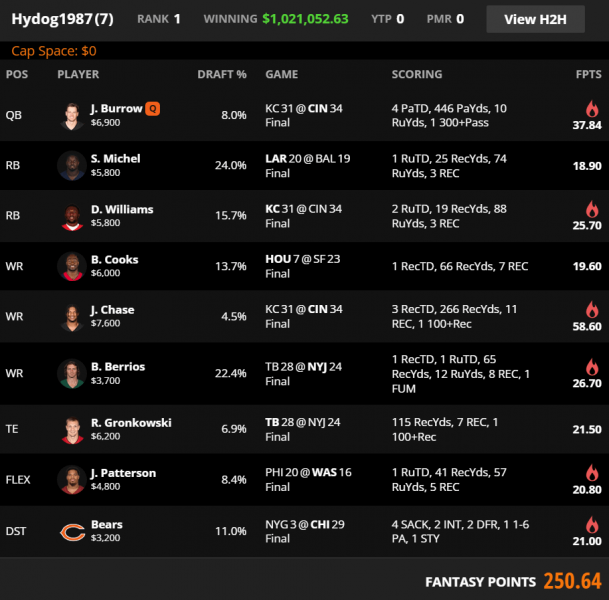 For the second time in as many weeks, the winning lineup used three running backs, making it the seventh time that a Millionaire winner flexed a running back. Eight of the 17 winners have flexed a wide receiver while two winners have rostered two tight ends.

There were only two non-onesie players in this lineup with a sub-10% ownership percentage. The obvious difference-maker was a 4.5% Ja'Marr Chase who was in half as many lineups as his teammate Tee Higgins in a week where many lineups paid all the way up for Cooper Kupp as their high-salary receiver. This lineup further separated from the field with Jaret Patterson who not only was sub-10% but was also in a salary tier that no one was using at running back. Rob Gronkowski’s very nice 6.9% provided leverage off of teammates Antonio Brown and Ronald Jones who were both in over 22% of lineups. 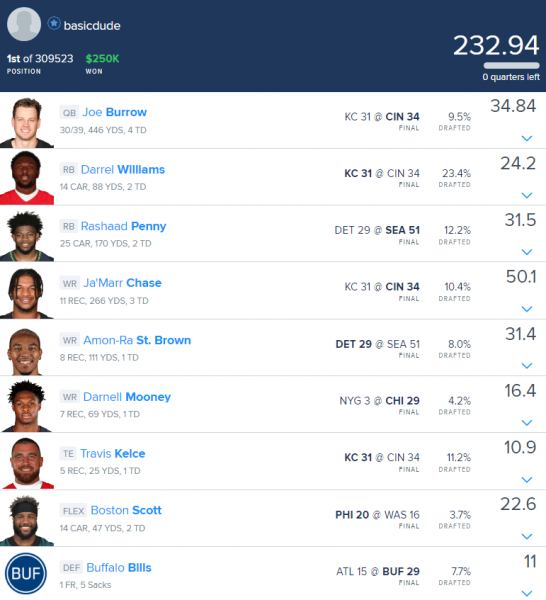 For the eighth time this season, the Sunday Million winner rostered three running backs. This is the same number of times that a winner has flexed a wide receiver while just one winner has used two tight ends.

Despite having relatively low cumulative ownership, this lineup was overly contrarian with four players having at least 10% ownership and only two under 5%. Including a double bring-back was probably what separated this lineup from the other Ja’Marr Chase lineups. Boston Scott was a perfect salary pivot off of the much more popular Devin Singletary, although both players had similar scores.