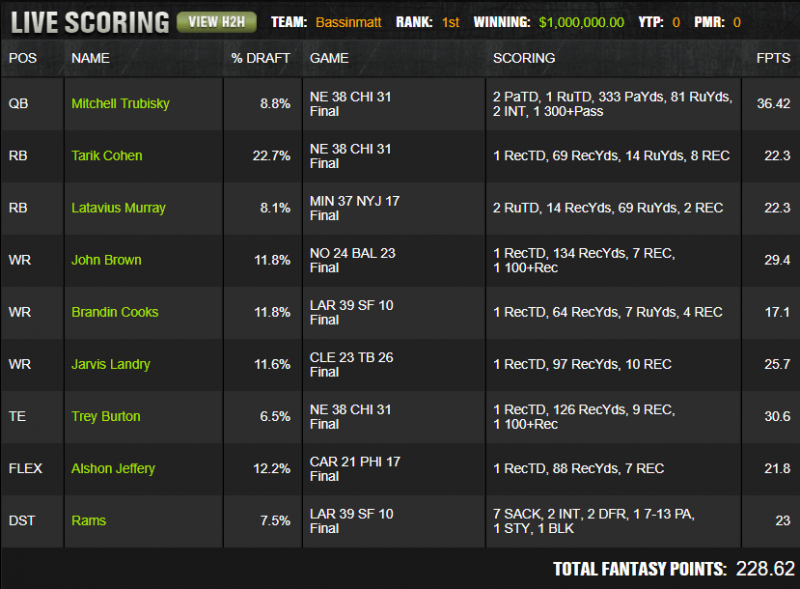 Bassinmatt took down Week 7’s Milly with just two flex-eligible players owned in fewer than 10 percent of lineups and no player with ownership below 6.5 percent. The differentiation in this lineup came from the fact that Bassinmatt faded Todd Gurley at 58.3 percent ownership—not only was Gurley the highest-owned player in any Millionaire so far this year, but it was the first time in 2018 that any player exceeded 40 percent ownership. Priced $1,300 more than any player on the slate, Gurley would have had to put up a historic game to make him a must-own in GPPs. While Gurley found the end zone three times, fading his massive salary allowed Bassinmatt to avoid any punt plays and get at least 21.8 DK points from all but one lineup spot.

With two huge values opening up midweek—namely Kerryon Johnson and Nick Chubb—combined with Gurley’s popularity, a stars and scrubs approach was the predominant lineup strategy in Week 7. Bassinmatt faded those mid-week RB values and built a balanced lineup with a bunch of mid-range plays. Being contrarian is always important in large-field GPPs but as this lineup shows, that doesn't necessarily mean loading up on low-owned plays—often, an unpopular lineup build can separate you from the field.

Incredibly, this was Bassinmatt’s lone entry in this week’s main event.

Pat James reminds us each week that it’s much easier to pair a low-owned stack with your core plays than to nail a bunch of individual dart throws. Pairing Mitch Trubisky with Trey Burton accomplished just that. Not only had Trubisky eclipsed 300 yards with multiple touchdowns in back-to-back games going into the week, but he’d gone over 40 rushing yards in consecutive games. In a game with an over/under at 48.5 and a spread of just 1.5, Trubisky registered as a top-four ceiling value at his position on 4for4.

Taylor Gabriel and Tarik Cohen were expected to be among the most popular plays going into the week and both exceeded 20 percent ownership. With Allen Robinson questionable going into the week, Burton was a classic leverage play. Per SportsInfoSolutions, only one team had been targeted over the middle at a higher rate than New England this year and Chicago exploited that weakness.

Like Burton, Murray served as a leverage play off a popular teammate—Adam Thielen was in over 35 percent of lineups and the Jets have been one of the worst teams in the league against the pass. That vulnerability over-shadowed the fact that New York also ranked 20th in schedule-adjusted fantasy points allowed to running backs and Minnesota was favored by over a field goal. As favorites in Week 6, the Vikings ran over 40 percent of the time for the first time all season and they stayed the course with a near 50-50 pass-run split in favorable game script in Week 7. 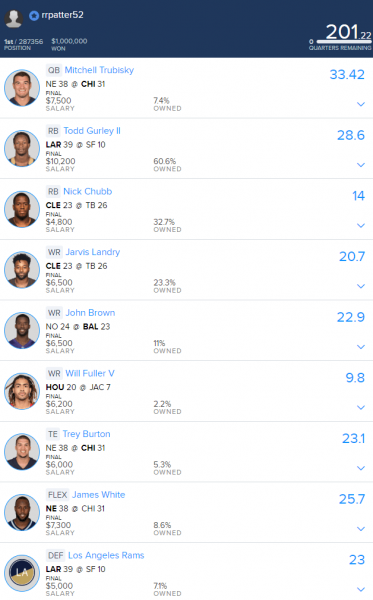 rrpatter52 also rolled out a Trubisky/Burton stack on his way to a $1,000,000 payday. The glaring differentiator here was Will Fuller who failed to reach double-digit FanDuel points but reminded us once again that a huge tournament can be won without being perfect. In last week’s Slate Breakdown, I suggested James White as a core play, despite the fact that he’s usually a PPR favorite. Because of Chicago’s pass rush, I expected White to have a higher touch expectation than usual and he handled the rock 19 times.

Speaking of White as the flex play, the winning Sunday Million lineup has now used a running back every week this year. This is a clear trend because of FanDuel’s point structure and that trend should be reflected in lineup strategy each week—this doesn’t mean that no wide receivers should be used in the flex, but the majority of lineups should often carry three running backs.

Accounting for late-week news goes far beyond adjusting to new value plays—as was the case in Week 7, just one or two news items can completely transform a slate. Early in the week, I discussed how tight salaries would limit lineup overlap—without “free squares” available, owners were destined to have a multitude of lineup constructions. As it turned out, two cheap running backs led to an overwhelming number of lineups favoring a stars and scrubs approach. Those that recognized this likely shift in strategy benefited by simply ensuring that at least some of their lineups loaded up on mid-range salaries.

When a popular play—especially a cheap one—pops up late in the week, think beyond whether or not you should play or fade a single player. Part of your GPP process each week should be dedicated to thinking about how groupthink will impact things such as lineup construction and popular salary ranges. If players like Gurley continue to dominate salary at an unprecedented rate, this process will become even more relevant. Remember, winning a GPP is about much more than simply picking the best players.