DraftKings led the charge in getting the NFL DFS hype train rolling this year, dropping Week 1 pricing 46 days before the main slate kicks off. While injuries and changes in depth charts will surely open up some major values by the time September 9 rolls around, DK seems to have done a decent job of posting relatively tight salaries, at least for a slate of games that is over six weeks away. Still, some players stand out. Below are the ones who caught my eye.

Since there are so many question marks surrounding early-season NFL—both in player value and strength of opposing defenses—redraft ADP is often a decent proxy of how players should be priced in Week 1. Russell Wilson is being drafted as the QB3 but he’s priced eighth at his position for the DK season opener. Popular opinion says to avoid rostering quarterbacks against Denver’s “No Fly Zone” but the Broncos lost Aqib Talib and T.J. Ward this offseason. Even as a defense to apparently avoid in 2017, Denver allowed 11 opponents to exceed their implied point total, tied for the most such games in the league.

Over the last two seasons, DangeRuss has accounted for 82 percent of Seattle’s total yards and 85.5 percent of total touchdowns, both tops in the league (Matthew Stafford is the only player to near such a number in either category, accounting for 80% of Detroit’s total yards). With a new offensive coordinator in town and few constants besides Wilson and Doug Baldwin, look for Seattle to lean heavily on their mobile quarterback early in the season. 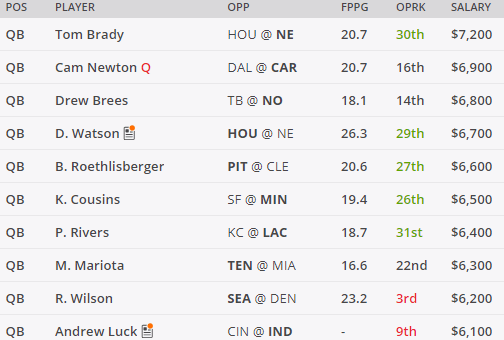 Despite finishing as a top-12 fantasy quarterback last year, Philip Rivers ($6,400) is a favorite to surprise in the touchdown department in 2018. The Chargers open the season at home in a potential shootout against division rival Kansas City.

In Andrew Luck’s last healthy season, he was never priced lower than the QB8 on DraftKings and found himself outside the top five just five times—he opens the 2018 season priced as the QB10 ($6,100). The Colts are home favorites against the Bengals and one of six teams with an implied point total above 24.

Through four games last season, only five players had more touches than Dalvin Cook. Owners usually want to wait and see how a player performs before rostering them after a major injury, but Cook has had nearly a full calendar year to recover since his ACL injury occurred so early in the season. Early betting lines peg Minnesota as one of the biggest Week 1 favorites and they kick things off against a 49ers defense 4for4 ranks as a bottom-five unit against running backs. 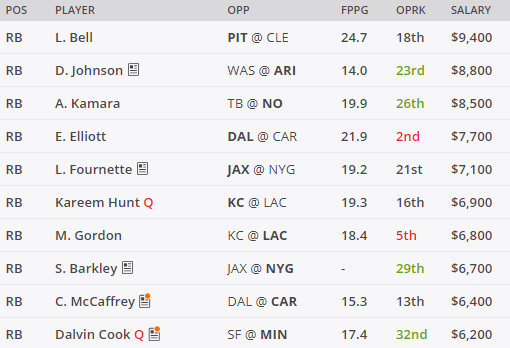 One of my favorite early-season DFS strategies is to roster preseason sleeper candidates in hopes of getting a discount before their price spikes. One of those players is Rex Burkhead ($4,200). New England has ranked in the top five in team running back touches each of the last two years, offering their backfields 32 touches per game, on average. Even if Burkhead concedes “starting” duties to Sony Michel, Sexy Rexy could approach 15 touches at a huge discount.

From Weeks 8–17 of last season, only six players were given more touches than Alex Collins ($5,200), who is priced as the RB16 behind a player who won’t even be active for Week 1. Only two teams are bigger favorites than the Ravens on the opening slate and the Bills' putrid offense should offer Baltimore exceptional field position throughout this game.

Odell Beckham hasn’t been priced below $8,000 on DraftKings since Week 14 of the 2014 season. The Giants face a Jaguars defense that allowed the fewest fantasy points to wide receivers last season but Jacksonville struggled against elite competition—in four games, including the playoffs, Antonio Brown and DeAndre Hopkins averaged a 7/106/1 line for 25.1 DK points per against this secondary. 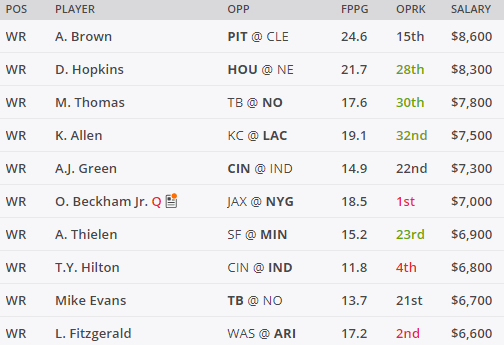 With the departure of Jimmy Graham and Paul Richardson, Doug Baldwin ($6,200) stands to set a career-high in targets. While the Broncos allowed the second-fewest DK points to opposing receivers last season, Denver was middling against slot men, ranked 15th in DK points allowed per target to the position, per Sports Info Solutions.

On the other side of the ball, Emmanuel Sanders ($5,000) was on pace for 123 targets last season—a number that would have ranked 13th among all players—but he’s priced as the WR26. Sanders has gradually seen his slot usage go up over the last three seasons and no defense was targeted more in the slot last year than the Seahawks. Denver finally has a competent quarterback and if Earl Thomas holds out through Week 1 the Seahawks will start the season with a completely new-look secondary.

4for4 identifies the Dolphins as a bottom-two defense against tight ends and Walker stands out as a player who could light up the touchdown column this season. With Matt LaFleur now calling plays in Tennessee, the Titans figure to swing their philosophy much more towards the pass than they have in years past. 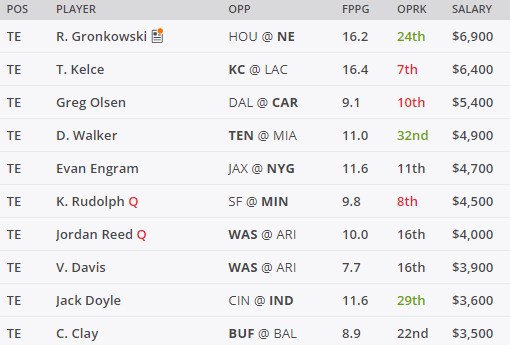