Rushing Expectation: Carlos Hyde - There Are Exceptions to Every Rule

There are exceptions to every rule.

The San Francisco 49ers are projected to be one of the worst teams in the NFL in 2016, and they also have arguably the toughest schedule. Throw in their horrendous offensive line play, and on the surface, Carlos Hyde and this entire backfield look like an easy fade.

Remember when I said there are exceptions to every rule? I hope so -- you read it literally 23.3 seconds ago. Oh by the way, Chip Kelly is already running his next play.

In 2015, the second-fastest team in the league played 4.6 seconds slower than Kelly’s Eagles, and the NFL average over the last three seasons was 7.6 seconds slower. To the casual fan 7.6 seconds may not seem significant, but over an entire game or season, this has a huge impact on a team's volume.

Volume correlates more positively towards fantasy points than any efficiency metric for the running back position. Pace can severely inflate attempts in both rush attempts and targets, which can help negate inefficiency. The Eagles have ranked in the top-two in total plays in each of the last two seasons.

Hyde has reportedly shed 15 pounds to keep up with Kelly’s up-tempo system in 2016. Sounds like a player motivated to take his game to the next level as he enters a system that’s proven to be proficient in utilizing its rushing attack.

Contrary to the recency bias surrounding the 2015 Eagles, Kelly would prefer to utilize a lead back -- and his scheme is similar to what Hyde ran in college at Ohio State. LeSean McCoy was given 300+ touches both seasons under Kelly and in his first year saw 78.9% of the running back touches. McCoy led the league in rushing attempts with 314, and also added 52 receptions.

Queue the “Hyde won’t be a factor in the receiving game” narrative.

Let’s pretend for a minute that I believe Hyde lacks receiving ability. Per TJ Hernandez, “LeSean McCoy saw 340 touches with just 28 catches in 2014 while Darren Sproles almost doubled up Shady in targets.”

“Philadelphia led the league in running back touches last season while winning seven games, just one more than San Francisco is projected for in 2016.”

You know what increases a running backs upside? A healthy dose of touches. Kelly’s backs saw 64% of all team touches in 2015, by far the most in the league. Hyde should get by far the biggest piece of this pie regardless of the passing down role Shaun Draughn will or will not have.

If Hyde comes anywhere close to the type of volume McCoy received under Kelly, he could be on the verge of a massive breakout if he can stay healthy.

Can Hyde earn his new coach’s trust? Let’s take a look at his 2015 Rushing Expectation sample to see if he is worthy of being Kelly’s lead back: 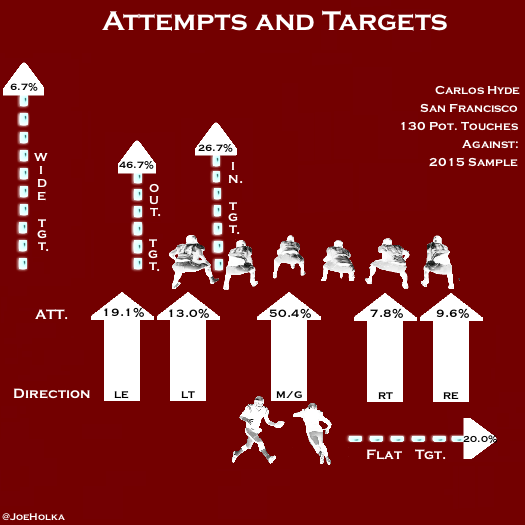 Hyde is a decisive, big-bodied running back who attacks creases well at the line of scrimmage and uses his above average burst to get to the outside often.

Hyde's run distribution was unique -- not because the majority of his runs are through the middle, but because the majority of his runs behind the tackle or end were to the left side. The only other player in my initial sample with a distribution similar to this was Jay Ajayi. This makes perfect sense, considering the left side is the lone strength of a 49ers offensive line that might be the worst front five in the league.

Hyde’s chart shows solid versatility in the passing game, though his sample size of 15 targets is small. He ran most of his routes to the outside lane, but also contributed out wide, on the inside, and in the flat.

Hyde’s receiving skills were average, but he showed solid ball skills, using his hands when given the opportunity. Targets represented just 11.5% of his potential touches (attempts + targets), the fourth lowest of my initial 20-player sample.

I strongly believe that not every Success Rate (SR) is created equal, and I think the signature metric of this methodology Expected Success Rate (eSR) does a great job highlighting this fact.

Hyde shows an immense amount of potential as a feature back from a talent perspective. From an efficiency, or metrics, perspective, the question is, did Hyde exceed or fall below expectations in 2015, and does he deserve the feature back role? 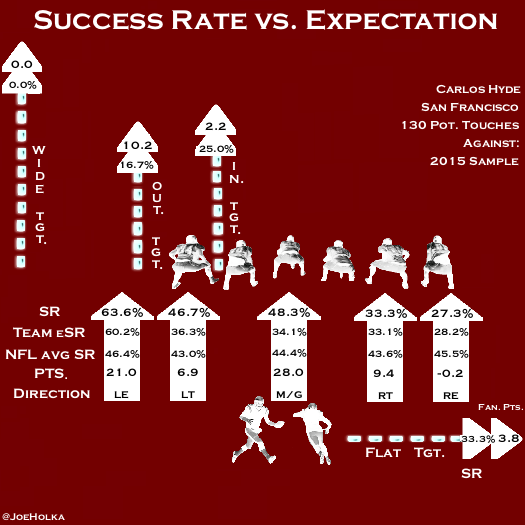 The overall eSR for Hyde and the 49ers was 36.6% per rushing attempt, the lowest in the league, and well below the NFL average of 44.3%.

San Francisco was equally unimpressive in pass protection, boasting the worst overall expectation of any team at 39.7% eSR per target for running backs.

Hyde was most successful running around left end (63.6% SR), which is where his highest expectation lies by a huge margin. Strangely enough, Hyde's worst running lane was the right end at 27.3%, though it only accounted for 9.6% of his total rushing attempts. For what it’s worth, this was the second lowest SR to left end in my entire sample after C.J. Anderson.

Hyde was extremely efficient through the middle, posting a staggering 14.2% above team expectation.

Though Hyde’s burst is above average and allows him occasionally get to the edge, his long speed is average at best.

Of the six players in the initial 20-player sample with 15% or more of their runs going to the left end, Hyde had the highest SR. The next closest was Ryan Mathews at 57.7%, a player whose Rushing Expectation numbers Hyde closely mirrors.

It’s quite clear that even behind arguably the worst run blocking in the league, Hyde’s efficiency numbers were exemplary. Let’s check Hyde's overall Rushing Expectation results to see if there is something beneath the surface we can explain through film evaluation. 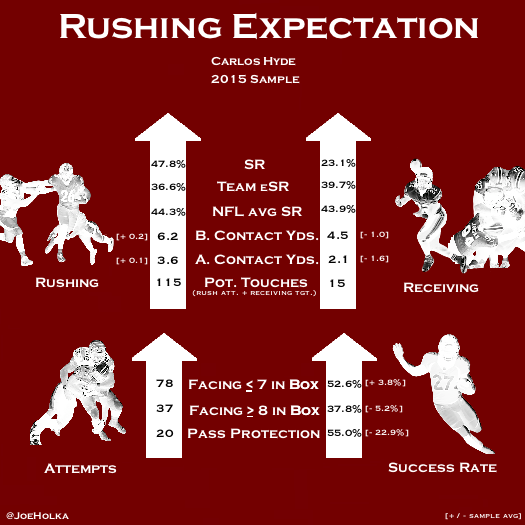 Behind what was statistically the NFL's worst run blocking offensive line according to Adjusted Line Yards, Hyde performed above expectation in his 2015 sample by 11.2% in the run game, but was one of the worst in pass game efficiency at -16.6% below his eSR.

Hyde’s rushing efficiency put him fourth overall in my entire 20-player sample in regards to percent above expectation on rush attempts. Of sixteen players with 15 or more targets, he finished second-to-last, just ahead of C.J. Anderson at -24.4% below expectation in the passing game.

Elusiveness behind the line of scrimmage is an extremely underrated (but prevalent) ability among the league's best feature backs. This is where before contact yards comes in. Hyde’s before contact yards (rushing) of 6.2 yards per carry tied for sixth-best out of my initial 20-player sample. However, this was just 0.2 yards above average on a per-attempt basis.

I should clarify that I chart yards before contact as the moment a player is handed the ball. I think what a player does as he approaches the line of scrimmage is just as important as what he does once he crosses it. Hyde’s overall athletic ability is good at avoiding penetration, but he is not dynamic enough to rely on agility and quickness alone.

Where Hyde shines on film is with his rare strength, physicality, and explosive power. He frequently creates his own holes and gets downhill. Once contacted, he almost always falls forward and his balance through contact is very good. Hyde charted out at 3.6 yards after contact in this sample, which was above average. He has rare finishing strength, and his power is repeatedly on display in short-yardage situations -- it is very noticeable how often Hyde forces missed tackles.

Hyde has rare vision and improvisational skills. When he sees a hole he can be extremely effective, as you can see by his numbers against seven or less in the box. His 52.6% SR in those situations was extremely impressive. The fact that he finished 3.8% higher than my sample average behind the worst offensive line in the league says a lot.

Another concern is Hyde’s lack success in pass protection. Hyde was an asset in pass protection just 55.0% of the time in 20 opportunities. He did show that he can stonewall defenders in their tracks on blitzes, but was below average in reading pressure and diagnosing his assignment. Keep in mind that while this was a small sample size, he will have to show vast improvement to be trusted in third down situations.

Kelly’s offense will undoubtedly use Hyde’s in situations where he is most likely to succeed, but I wouldn’t rule out Hyde getting more work in the passing game in 2016. In this type of up-tempo offense, Kelly isn’t going to want to sub Hyde out of every passing situation, and Kelly has already been quoted as saying Hyde is a back “who can do it all”.

That said, Hyde has just 23 catches in his NFL career, or slightly over one reception per game. He also never posted more than 16 receptions in a single season in college. Draughn is the most productive pass-catching running back on the team, but he is not threat to Hyde as an interior runner. It is worth noting that Draughn was one of Blaine Gabbert's most trusted targets last season, and Gabbert is likely to win the starting job.

It is no secret that Hyde has struggled to stay healthy -- he has battled through multiple soft tissue injuries over his short career. While this can be considered by most as a red flag, I wouldn’t say I necessarily believe in the “injury prone” label, but that is a completely separate debate. In any case, Hyde's first season was cut short with an ankle injury, and he played through a stress fracture in his foot most of 2015 until being shut down in Week 7.

That’s right: Hyde performed with near-elite efficiency ... behind one of the worst offensive lines in the league ... while injured.

I strongly urge you to check out TJ’s article on the Kelly in its entirety -- it’s fantastic. If the narrative of inevitable poor game script is the only thing holding you back from joining #TeamHyde, then I'll wrap up with another gem from TJ:

Over the past five seasons, 69 teams have generated at least 26 turnovers (the fewest turnovers of any Chip Kelly defense), and only two of these teams (2.9 percent) had an average point differential of negative seven points or more. Of the 91 teams that generated fewer than 26 turnovers, 21 of those teams (23.1 percent) posted a point differential of at least negative seven points per game or worse. In other words, a team that is willing to gamble on defense and generate turnovers will likely be in close games, even if they are losing the majority of those contests.

Investing in running backs on bad teams is almost never a good idea, but Hyde has the potential to be the exception to that rule.