For those that are new to best-ball leagues, such as the popular MFL10 leagues, getting an idea of how some of the most experienced players in the industry approach drafts is a great way to start thinking about strategy.

For the second part of this series, Jen Ryan of Football Diehards and Heath Cummings of CBS Sports discuss their plan of attack for MFL10s.

How many MFL10s did you play last year? How many do you plan on playing this year?

Jen Ryan: I finished at 91 public leagues and a handful of private, so just over 100 last year. Same goal this year, going for that century mark!

Do you find an edge in participating in more drafts at certain times during the year? When and why?

JR: Not one that I can notice, honestly, but this is only my third year at it. I just draft as often as possible, from the day they kick off until the day the lobby closes.

HC: If anything I'll ramp up more when the season gets closer and I feel more confident in which players I want to be heavily invested in. I did enjoy the rookie bump around the draft and think that provides a slight edge for those that can keep their wits about rookie value.

Is there a maximum amount of exposure you want to have to any single player? Will you forego value and bypass that player if that max exposure is reached?

JR: I aim for 20-25%, but I go above that. I'm at 30+% on a few players right now. I will not forgo value if I'm worried about being overexposed to a player -- this is my current dilemma with Thomas Rawls.

HC: That really depends on what I'm spending on a player. I don't care how much I have of a guy that's a 15th rounder or later, but I'd like to eventually be below 50% on any early picks.

In a vacuum, do you have an ideal roster construction strategy (# of players at each position) that you strive for? Any popular strategies that you almost always avoid?

JR: My ideal roster consists of "don'ts" rather than "do's". So, I don't draft more than 3 QBs, more than 3 DST, or more than 3 TE. If I have a stud in one of those single positions, I'll go with just 2. I almost always aim to have more receivers than running backs. I can't say I avoid any popular strategies only because I do so many of these that some are bound to fit the mold of the popular strategies.

HC: I'm more likely to only take 2 QBs if I take one in the first 6 rounds but other than that, not really. I'd like a minimum of 5 RB & 6 WR but often find myself with more of both. I don't worry about what position I'm taking until the 5th round, but current ADP means I usually have a lot of WRs early. 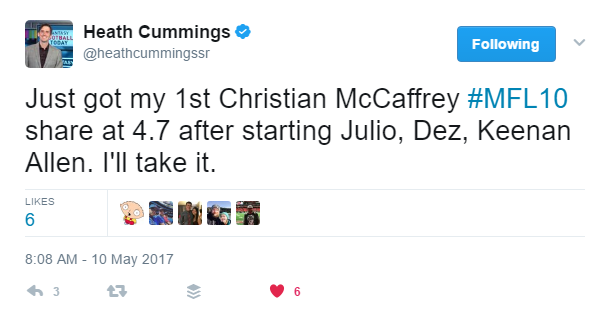 Is there an unconventional roster construction strategy that you have successfully used in the past or would like to implement this year?

JR: Nothing unconventional in the sense that it won't already be mentioned. I have taken a few shots this year at the Hyper Fragility style of drafting three running backs that Mike Beers did extensive research on. I am toying around with some DFS-ish approaches where I can, meaning I'll pair a WR/QB if it makes sense, or a RB/DST.

Editor's Note: Keep an eye out for our MFL10 strategy interview next week with the creator of the Hyper Fragile draft strategy, Mike Beers.

JR: In redraft, I won't draft more than one player at the single positions. I'll stream QB, TE, DST. I don't care about depth at all with those positions in redraft. In best-ball it is required, but in redraft I stockpile receivers and running backs.

HC: Consistency is way overblown in traditional redraft but it's all but irrelevant here. Give me the up-and-down big-play specialists all day since I don't have to decide when to start them.

How do you manage your bankroll, or at what point do you decide to make the jump from MFL10s to MFL25s, or even MFL100s?

JR: My bankroll management is super-sophisticated: when I run out of funds, I add more. That is obviously a joke but it is true. Depending on what I have going on in the upcoming week or two depends on how much I'll deposit. When I have "downtime" on the calendar, I just increase my volume. I can't resist the 25s and the 100s when they first open, but I tend to really jump in a few of those towards the end of the summer when I feel like time is running out and I don't want to miss out on them.

HC: I'm entering an MFL10 per week, or the time being. I like the flow of generally having two going at the same time. I'm more likely to double up at the season gets closer than change the stakes I'm playing for, at least this year.

Do you plan on participating in MFL 50/50s this season? If so, how will you approach this new format?

JR: I will, and I can't wait for them to open up! I think I'll approach them with less mental constraints of ADP. I'll want high-floor core guys and then a few upside guys, but I won't be looking for value as much so I'll loosen up ADP a bit.

HC: I haven't fully decided but I like the concept. I'd be more apt to take 3 QB, 3 TE and 3 DEF in that format and I'd be more concerned with bye weeks than I currently am.

What is one tip that would you give to someone signing up for their first MFL10?

JR: Turn on your auto-tweets and engage with people on twitter. When I first started, I had so many great conversations with people who had an opinion on a pick. I miss the learning aspect of that with MFL10s, I have mine turned off now just because of the volume, but when I first started with them in 2015, I felt like my $10 was worth so much more than aiming for 1st place, with all of the interactions generated. Do not be shy on twitter when it comes to fantasy football, I have personally found that everyone is so nice!

HC: Get familiar with the tools at fantasyadhd.com and use them heavily. I use them a ton and imagine they'd be even more useful for first-time players.

Editor's note: We also have an MFL10 strategy interview next week with the creator of the FantasyADHD tools.

Which player do you hope to have the most shares of in MFL10s this season and why?

JR: My two highest-owned (at last check) are TY Hilton and Thomas Rawls. TY is someone I am actively targeting (just like his quarterback). He really doesn't have a ton of competition for targets and he's worth the late 1st/early 2nd pricetag for me. The other is Rawls because I can't stop drafting him in the late-teens. I feel forced to take him in those rounds. 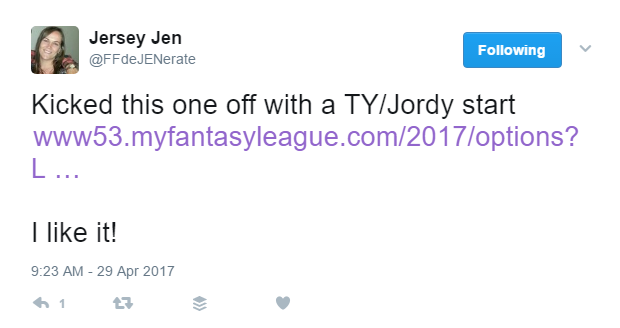 HC: I've drafted Terrelle Pryor in 7/11 drafts so far, so he's the odds on favorite. Pryor is a 3/4 turn pick for me and I've landed him twice in the fifth already. The one rookie I'll be highest on is Josh Reynolds as a 20th round pick. Expect a few monster games from him.

Thanks to Jen and Heath for the fantastic MFL10 advice. Be sure to follow them on twitter @FFdeJENerate and @heathcummingssr.