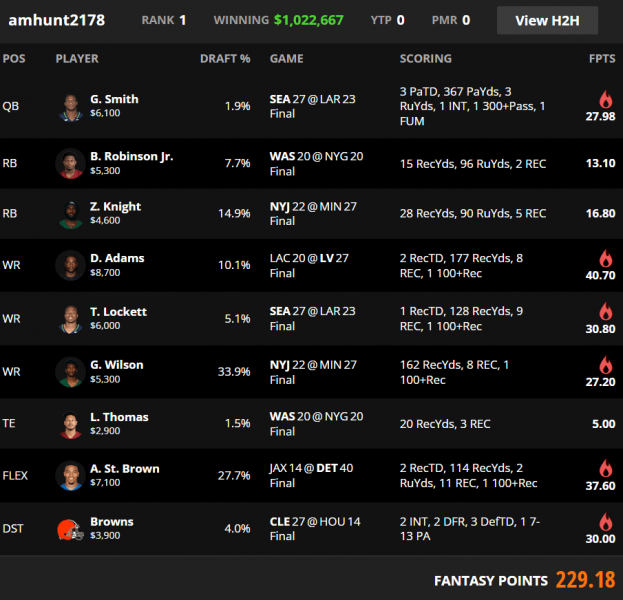 This was just the second Millionaire winner this season to us two wide receivers with ownership of 20% or higher. From 2019–2021, there were only four such winners.

Despite two players over 20%, this lineup had below-average cumulative ownership for a winner by using five players under 10% with three of those below 5%—just four other winners this year have used such a combination of sub-10% plays.

No other winning lineup this year has stacked two of their running backs with another player from the same game. From 2019–2020, that happened nine times.

Geno Smith was priced just $200 above Trevor Lawrence, who was the most popular quarterback on the slate, used in over 15% of lineups. Lockett had a similar salary to Lawrence’s teammate Christian Kirk, who at 22%, was the third-most rostered wide receiver on the slate. 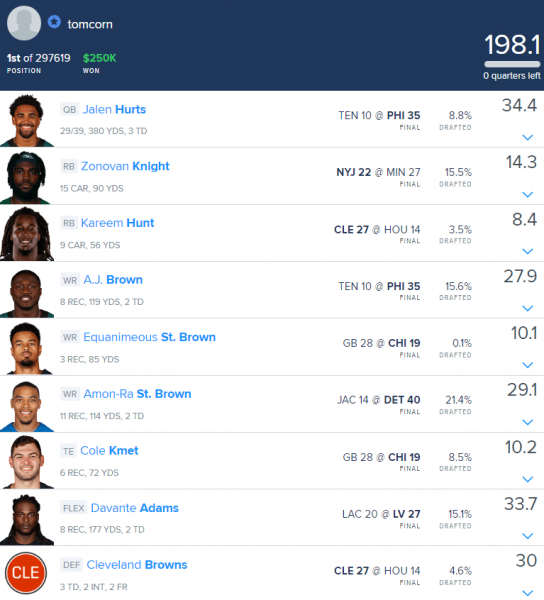 This was the first winning Sunday Million lineup of 2022 that used three wide receivers all above 15% ownership. Just three other winners over the past three seasons used such a lineup.

From 2019–2021, the average cumulative ownership of winning Sunday million lineups was 117%, a number reached by just three winners this season.

Of the 11 quarterback stacks used in winning Sunday Million lineups this year (two winners used an unstacked quarterback), only two have used a player on the opposing offense. Of the 15 non-quarterback mini-stacks, 11 have been players from the same team.

One way to gain leverage on the field is through unique roster construction. This was the first winning Sunday Million lineup of 2022 to roster a running back with a salary below $6,000, let alone two such backs. From 2019–2021, one other winner used two sub-$6K running backs.