We all know how important the playoffs are when it comes to winning the overall Best Ball Mania 3 tournament. Hitting on Weeks 15 through 17 is weighted way more heavily than how your team does the first 14 weeks in the Underdog tournament where a grand prize of $2 million is on the line.

When I started doing research, my process was to look at team spreads on the DraftKings sportsbook because spreads give us a good indication if a team is favored or not, which can help us parse out which running backs will get the most touches according to the team spreads. If a team is favored, your fantasy players are usually scoring more points and that’s what we want, to score more points than the field, and since 2014, players on favored teams have scored more fantasy points per game than players on underdog squads at every single position including RB, per NFL Trends tool. TJ Hernandez already did a great job of looking at which teams we should target for Week 17, along with their respective games. Today I want to look at the RB position and which teams we should be targeting for those final weeks.

Teams to Target in Weeks 15-17 on Underdog 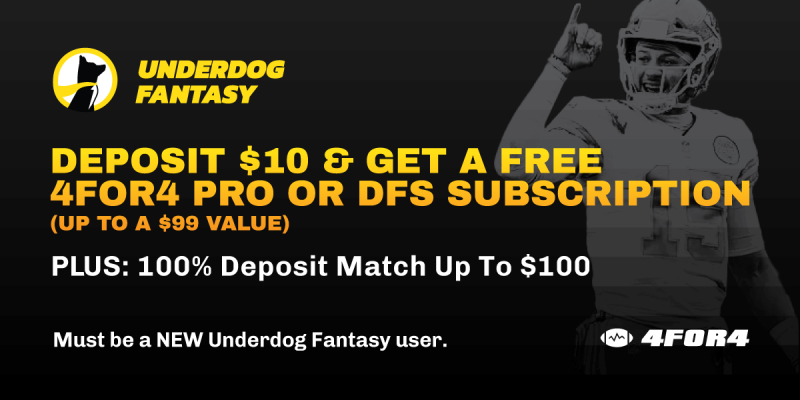 Should we Stack Opposing WRs if We’re Targeting RBs?

One thing I do want to mention is the running backs mentioned above all have relatively low ADPs for Underdog drafts. The highest ADP is J.K. Dobbins at 56 overall, so if we’re looking to stack the opposing wide receiver, most of these wide receivers that we want to stack have a relatively higher ADP.

One way we could combat this though is if we stack our QB1 with our WR4, as TJ Hernadez showed us in his stacking column. QB1+WR4 stacks have shown profitable results with greater than +3.0% Advance Rate Over Expectation in both 2020 and 2021. So if we look at the table below, most of our WR4 have attainable ADPs which should make our run-back options viable when drafting this summer.

A fantasy football writer who happens to have the cutest puppy alive in Reeses, Amr focuses on redraft content while also dabbling in dynasty. He'll never find a WR he doesn't love while on the clock, especially if he plays for his hometown Carolina Panthers. Amr's writing is also featured on RotoViz.

More from Amr Gabr
Most Popular