The beauty of fantasy football, for me, is drafting. This year more than any I can really remember, I have a specific range in mind where I want to draft. I need a top-five pick. The tier break after the top five is steep and I want to be in those elite first five picks in PPR drafts.

My favorite spot in the top five is the third pick. It allows you the most flexibility if one of the elite running backs falls and if they don’t you get your choice of one of the three elite wide receivers. Win-win, right? There is also another big tier break in the third round which you’ll get to take advantage of as the top running backs drop off shortly after your draft spot if you happen to go elsewhere with your first two picks.

In this article, I will walk through the perfect draft from the third spot in a 12-team full-PPR ESPN league. Each pick was optimized using projections and value-based rankings from the 4for4 Draft Hero tool. 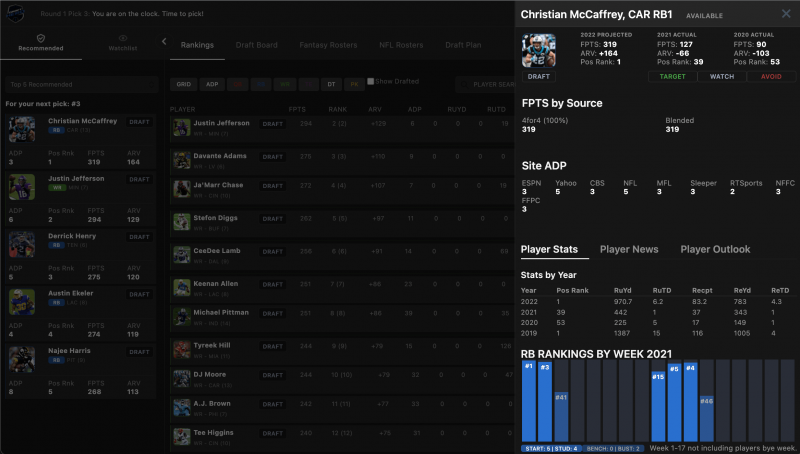 This is a home run. McCaffrey is slowly creeping up within striking distance of Jonathan Taylor for the number one pick. Since redefining expectations for what a running back could do in fantasy football in 2019, he’s had two injury-plagued seasons and people are cautious.

Let others be cautious. You’re here to win. When McCaffrey plays, he is the best fantasy asset on the planet. In five of the seven games he played last year he was a top-15 RB in five and that included an RB1, RB3, RB4, and RB5 finish. He averaged 23.4 touches per game in 2021 with 5.3 of those touches being receptions. He is the best draft pick here, hands down. Draft Hero’s suggestion made this an easy selection.

Brendan started playing fantasy football in middle school and still maintains the first league he started with. While in dozens of leagues outside of the friendly confines of the original office conference room where the first draft was held, nothing will ever mean more than the Needwood League. While covering DC sports in print and on the radio, the local teams continuously let him down, but fantasy football and DFS have always been there for him. He started contributing fantasy football articles to The Washington Post and NBC Sports Washington before eventually joining up with NumberBall.com on the editorial side, but his passion was always on the content side. He joined 4for4 in August of 2022 as an analyst.