After what feels like an incredibly long offseason, we are finally within hours of NFL football. Pick'em and Survivor pools are an integral part of the fantasy football landscape and this weekly article will give you the info and resources to dominate any pool, whether it’s your office fun-pool or a massive entry high-stakes contest.

With the help of TeamRankings' customizable tools and data, I’ll go over the best value picks for Week 1, along with the top suggestions for Survivor pools.

Before I get into the picks, note I’m not suggesting you should make all of the picks listed below. The best Week 1 picks for your NFL pool depend on strategy factors such as your pool’s size, rules and prize structure, plus situational factors like your current place in the standings and the number of weeks remaining.

However, these picks do provide some of the best opportunities to differentiate your Week 1 picks from your pool opponents, by taking on only a modest amount of risk, or no additional risk at all.

Dallas has had six players test positive for COVID-19 since August 21st, including guard Zack Martin, who’s most likely out for this week’s contest. He’s their best offensive lineman and is sidelined against one of the league’s strongest defensive units in Tampa Bay. The Bucs are favored by 8.5 in this tilt (the highest spread of the week), with 78%+ odds to win by both Vegas and TeamRankings.

Tampa Bay is the choice by 93% of the public, so you will win or lose with the bulk of your pool.

The Chiefs have won six straight Week 1 contests, while Cleveland hasn’t won one since 2004. That should be enough to make this pick, but I’ll go on. The spread in this game is a healthy 6.5 points in favor of Kansas City, and they boast 71%+ odds to win by both TeamRankings and Vegas.

Like the Bucs above, the public is on this one 94% of the time so it’s certainly not a differentiator.

We have the worst team from 2020 against the projected basement dwellers of 2021. Someone has to win this tilt and the new-look Jags are in a better spot to do so. We should trust the oddsmakers on this one, despite the appearance of these two disheveled squads heading into the season.

The Jags are favored by 2.5 points on the road with 61% win odds via TeamRankings. The public is only on Jacksonville at a 69% rate, which is lower than the other teams in that same spread range (Titans-81% and Seahawks-83%), making them a relative bargain from a risk/reward perspective.

The Broncos are three-point favorites on the road, and the public is rolling with them at a lower rate than both Vegas and TeamRankings. Just 55% of bettors are taking Denver, while their chances of winning are 60% by Vegas odds and 59% via TeamRankings.

Denver’s defense is looking tough with one of the best secondaries in the NFL, while the Giants are pretty banged up to start the season. We’re also not sure if Daniel Jones has made a leap in 2021. This could be a nice game to set yourself apart from other pickers.

This pick is definitely not appropriate for all pools. If you’re in a smaller, season-long pool, it’s probably not worth the risk. However, if you’re involved in a single-week contest or your pool has weekly prizes, it could be a contrarian way to go.

The Colts are home dogs with a spread of 2.5 points and have a rushed-back-from-injury Carson Wentz under center. However, their defense is the difference-maker here and could maintain Russell Wilson and his weapons, while Jonathan Taylor controls the ground game. This contest will be close and tough, but the home team may end up surprising people.

The public bettors are only on Indy at 17% with 83% picking the Seahawks, while TeamRankings’ odds for the Colts differ by a mere 10%.

The last piece of the survivor pool puzzle is future value. If you fire off a powerful team in Week 1, you won’t be able to use them later. 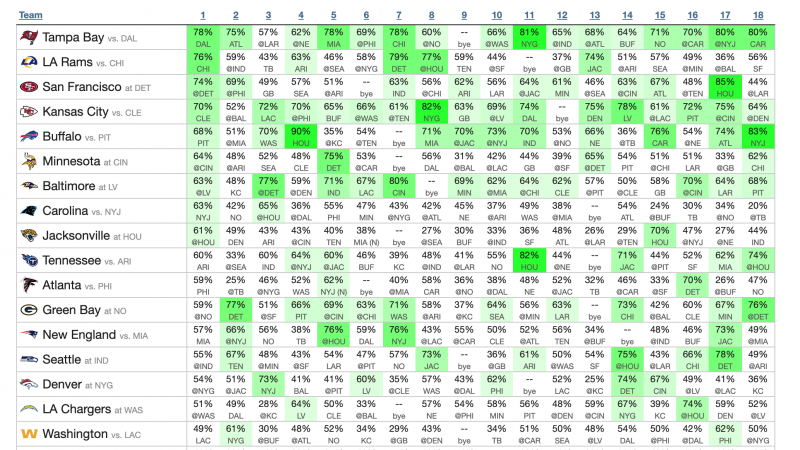