When to Draft a Tight End in Your Fantasy League

Fantasy football is a game of relativity and, relatively speaking, the tight end position sucks. Last season, for example, by the time you got to the overall TE4 in half-PPR scoring (T.J. Hockenson, 141.8 points), you already had the equivalent of the RB28 (Chase Edmonds, 141.5) or the WR37 (Michael Gallup, 143.8 points). The fact is, we really need to be aiming for tight ends who have the upside of finishing the season as the highest-scoring player at the position or ceding the position to stream guys in fantastic matchups. 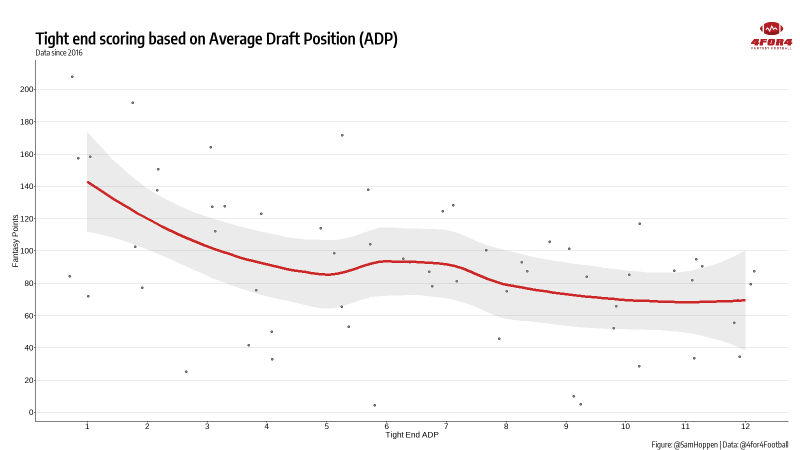 As you can see by the chart above, the high-end of tight end production in fantasy typically resides in the first three rounds of your draft. After that, it flattens out quickly and remains like that through the majority of the rest of the rounds.

That said, we do have players who seem to be on the cusp of a breakout, including a player who just became the highest-drafted tight end in the history of the NFL Draft. Below we will break down how to approach the tight end position in 2021 according to draft position, assuming a 12-team snake draft with both positional and overall ADP courtesy of the 4for4 Multi-Site ADP tool.