Anthony Schwartz is a Low-Risk Fantasy Flier as a Rookie

If two freighters make the Kessel Run at the same time, one skirting the event horizon of a supermassive black hole and the other taking a traditional hyperspace lane, is a parsec a unit of time or distance?

If you’re a deep-in-the-weeds Star Wars nerd, these are the kinds of math problems-slash-philosophical quandaries that both keep you up at night and also give you more energy than a coaxium injection straight to a ship’s fuel lines.

Now, I’m aware this is a football website, but the references to Earth’s favorite space opera are actually more relevant than you might believe. This is because, in both “Laser Swords: the Movie” and the NFL, a 20-year-old wonder enters the scene and joins the scrappy, orange-clad underdogs of a surprisingly brutal galaxy. Both have preternatural abilities to soar, uncanny coordination, and charming demeanors on display. They and their merry bands of rogues and misfits will attempt to dismantle steel-adorned doomsday devices and finally win one for the long-suffering citizens of their worlds.

I’m of course talking about Luke Skywalker Anthony Schwartz, rookie third-round receiver of the Cleveland Browns in 2021. It’s no exaggeration to say that Schwartz may be tapping into some kind of galactic energy source, the way he flew around the field as a do-it-all offensive weapon for Auburn in college. It’s hard to say the fresh-faced newbie will be your first choice to take an impossible shot for your fantasy teams, but should you trust him to ride along as your wingmate in 2021?

Schwartz arrives in the NFL fresh out of Auburn University, where he spent three years as the Tigers’ possession and slot man. In college, he compiled 1,428 receiving yards and six touchdowns on 174 targets in 35 games—a not-insignificant production summary, but not one that immediately leaps off the page.

With context, however, things look a little more compelling. Even though Schwartz never topped 85 targets in a single college season, we saw Auburn throw just 365 total times that year. His seemingly paltry 85-target total is actually a solid 23.3% target share. To get the best possible sense of Schwartz’s college career, we’ll look at rate and share stats like target rate, catch rate, average depth of target, and so on. In addition, we can get a sense of how good these numbers are relative to the rest of the NCAA’s wide receivers by using percentiles.

The table below shows Schwartz’s college production rates by percentile among wide receivers to see 35 or more targets in each season.

For each of his last two years in school, Schwartz was targeted on his routes at a rate ranked in the 90th percentile or higher of wide receivers in the nation. These kinds of workloads are typical for a chain-moving slot receiver, but Schwartz adds a bonus in his production with the ball in his hands.

The data paints a picture of Schwartz as an explosive short-area receiver who excels in YAC production. He seems like the kind of explosive weapon that does wonders once he gets the ball in his hands, but there might be some focus drops or hands issues. Like the Millennium Falcon, Schwartz can get rocking with the cargo in his bay, but also like the Corellian light freighter, he might need some tweaks to run more reliably.

One major positive, however, is that Schwartz’s production and workload have increased every single season in college. His final year at Auburn saw him bring in a 23.3% team target share, a 26.2% team receiving yards share, and a 25.0% touchdown share. He hasn’t proven he can handle a major workload in terms of volume yet, but he has the potential to do so and make the most of each opportunity.

Schwartz was selected by the Cleveland Browns as the 15th wide receiver off the board in the class. Unfortunately, so many of his peers went ahead of him, pushing Schwartz’s draft capital lower, but becoming a Day 2 pick is still a solid achievement for future fantasy success.

Countless studies have been done that show that the higher a wide receiver is drafted in the rookie draft, the better their eventual fantasy outlook is. In addition, a receiver who enters the draft early and breaks out early has a better chance to hit for fantasy than a late bloomer. So, despite his college profile—which requires some caveating—Schwartz’s third-round draft value and age 20 "breakout season" should give us some assurance about the potential the Browns see in him to contribute. 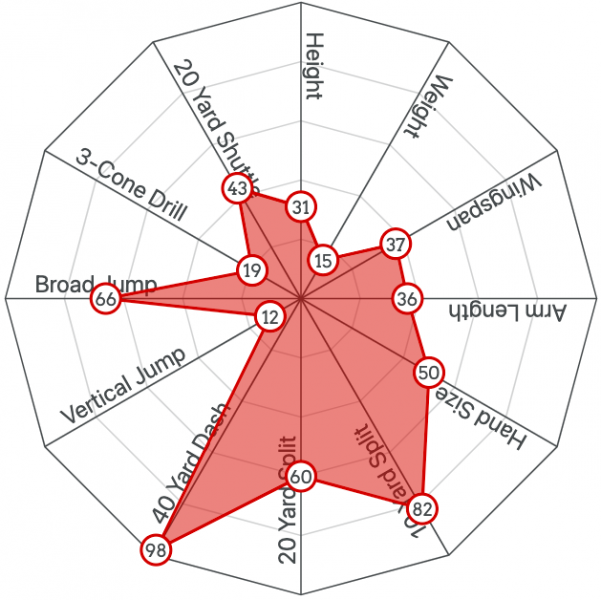 Schwartz’s obvious strength is his straight-line speed, racking up a 99th percentile raw 40 time that still adjusts to an 84th percentile speed score. Despite being a fairly light player at 186 pounds, Schwartz’s 4.27 40-yard dash shows he can flat-out fly and was maybe underutilized as a short-area receiver at Auburn.

A mediocre 32nd percentile agility score does give concern that he might not make a lot of defenders miss (he didn’t in school; 3rd and 22nd percentile missed tackles forced rate each of the last two years). That might not matter, though, if he leaves them in the dust at the line of scrimmage.

Per Mockdraftable, Schwartz’s best athletic comparables include the likes of Curtis Samuel, Kenny Stills, Dexter Jackson, and Lee Evans – smaller players with ridiculous speed. There is some variety, however, in the styles of wide receivers these players ended up in the NFL. Will Schwartz stick as a pure slot threat, or will the Browns use him to blow the top off of defenses?

How Schwarts Fits in with the Browns

How a player fits on his new franchise can make all the difference to his fantasy potential in the near term. If you read my player profile on Rashod Bateman, you’ll know that I love the talent but his early-career fit with the Baltimore Ravens might dampen his 2021 production. This begs the question: is Schwartz in a similar spot?

The Browns are an intriguing team to project a new player to. What most people know about head coach Kevin Stefanski’s scheme is that he likes to focus on the backfield, using the running backs as his main offensive engine. A deeper breakdown of usage, however, shows that there’s more to his game plan than “ESTABLISH THE RUN” written in Sharpie on an index card.

The table below depicts the Stefanski offense by mapping out the three main wide receiver roles. The data below sums up where they line up (wide vs. slot), usage (team target share), and their role (yards per reception, etc.).

Stefanski’s offenses operate with pretty clearly defined roles. The WR1, lining up a majority of the time out wide, is both the primary target hog and the team’s main downfield threat, but lags behind a bit as a scorer. In Minnesota, this was Stefon Diggs; with Cleveland, Odell Beckham fills this role. The WR2 is ideally wide and slot versatile and sees a target share almost as high as the WR1. However, he typically sees lower yards per reception and touchdown rates, making him mainly a chain-mover. Jarvis Landry operates in this position now; the previous occupant of the role was Adam Thielen.

That leaves us with the WR3. This has largely been a role in Stefanski’s offense that lines up wide and sees about half of the target share that the other two wide receivers take. This role is also only about half as productive as the other wide receivers, due to the diminished target share; the Stefanski WR3 has earned about 5.9 half-PPR points per game, while the top two spots generate on average 10.6 and 9.1 half-PPR points per game.

In addition to being the role that most early-round rookies step into, Schwartz finds himself on a team with two locked-in veterans to occupy the top two spots and a host of players with experience in the system and on the franchise to compete with. The WR3 is the maximum we should expect for Schwartz—who, again, is a work-in-progress—in his first pro season.

As early as next season, however, either or both of Beckham and Landry can be cut or traded and save $15 million each against the cap. Say Beckham has another injury-riddled season and doesn’t look like his old self, so the Browns move on; Schwartz could then step into a bigger downfield wideout role as the new speedy highlight reel. If Landry doesn’t prove worthwhile, Cleveland could let him go and Schwartz could then assume his familiar slot role and rack up targets.

It’s unlikely Schwartz makes a huge impact in his first year, barring injury or a scheme change, but his talent and the team makeup make a strong case to draft him in your dynasty league rookie drafts.