The NFL conducted its first-ever virtual draft in late April because of the national quarantine. All of the key decision-makers were working from home and the broadcast revealed a level of transparency and intimacy never seen before. It was refreshing to witness this event outside of the archaic “war rooms.” For fantasy players, rookie drafts are already here or just around the corner. This article will tell you about 12 sleepers that will supercharge your dynasty team.

Mims was the 13th wide receiver selected in the 2020 NFL Draft and No. 59 overall by the Jets. The former Baylor University receiver ranks sixth on the school’s career receiving yards list and fifth in receptions. Mims is also the third player in Baylor history with multiple seasons of 1,000 or more receiving yards. He’s the only player in the FBS to score at least eight touchdowns in each of the last three seasons. 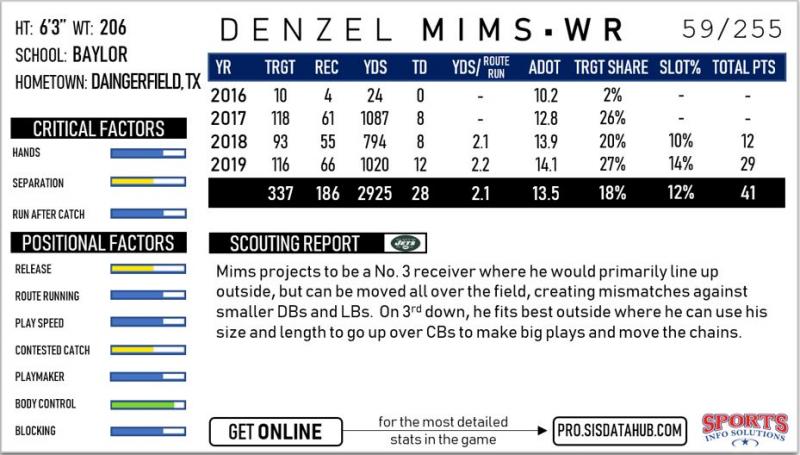 The Jets traded down and were still able to scoop up one of the top receiver prospects. New York leveraged the depth of this year’s wide receiver pool and selected Mims to replace Robby Anderson who signed with the Panthers during free agency. This is a glimpse of what he’ll bring to the Jets.

Mims will have a chance to make an immediate impact if he calibrates quickly with third-year quarterback Sam Darnold. The presence of Mims and Breshad Perriman, who the Jets signed to a one-year contract during free agency, provides the Jets with weapons to attack defenses downfield. The presence of these two vertical receivers will open things up underneath for Jamison Crowder. Running back Le’Veon Bell is also well positioned for a bounce-back after finishing last season with a disappointing 0.66 fantasy points per opportunity. He finished with the seventh-highest opportunity share (76.8%) among running backs. Mims is someone to keep on your radar in the mid to late second round of dynasty rookie drafts. He’s walking into a great situation in New York. The Jets have 183 vacated targets entering this season. New York could also go separate ways with Crowder in 2021 and save $10.5 million against the cap. Mims has a very clear path to becoming the Jets’ No. 1 receiver.

Gandy-Golden was selected No. 142 overall (fourth round) by the Redskins. He became the eighth Liberty player ever drafted and the first since defensive back Walt Aikens in 2014. Gandy-Golden’s receiving yards were the fourth-most in the FBS. His receptions (79), yards per reception (19.3), and receiving touchdowns (10) all ranked in the top-20. It is also important to know that Gandy-Golden dominated against Power 5 programs. He combined for 17 receptions, 247 receiving yards, and two touchdowns against them. 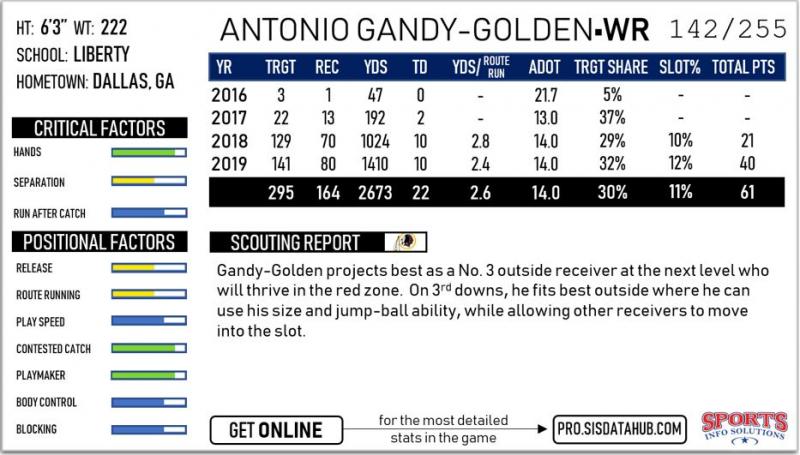 Gandy-Golden was one of the best value picks of the 2020 NFL Draft. He’s in a position to contribute immediately and is an ideal complement to Washington’s breakout receiver from last season, Terry McLaurin. It would not be a surprise to see Gandy-Golden open the season as the Redskins No. 2 receiver. He’s an excellent target in the third round of rookie drafts.

Parkinson was selected by the Seahawks in the fourth round. He was a second-team All Pac-12 selection at Stanford last season. The university has a reputation for producing elite tight ends. 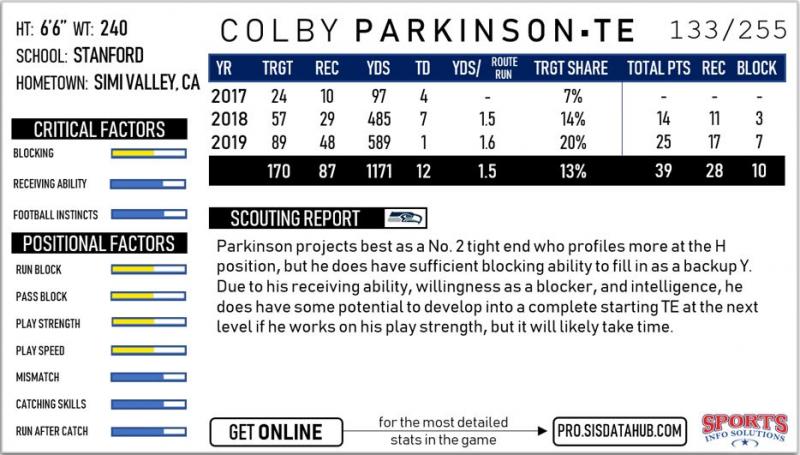 The Seahawks have essentially filled their No.3 receiver role with a tight end. Seattle’s No. 1 and No. 2 receiver roles are on lockdown thanks to Tyler Lockett and DK Metcalf. Lockett had a career season with 110 targets, 82 receptions, and 1,057 receiving yards. Metcalf delivered on the hype with a masterful rookie season. He caught 58 of 100 targets for 900 receiving yards. Will Dissly operated as the third option in the passing game for the Seahawks before rupturing his Achilles in Week 6. He averaged 52.5 receiving yards per game. This trend is an indicator of a change in the Seahawks offensive philosophy. The Seahawks also traded back into the seventh round to select tight end Stephen Sullivan out of LSU.

Here's an example of Colby Parkinson's skill-set. He can run seam and fade routes and has good body control. He uses his hands well to snag the ball out of the air. #Seahawks pic.twitter.com/IRlIouLI7b

The Seahawks are stacked with tight ends. Greg Olsen and Luke Willson are older. Many question Dissly’s durability. Jacob Hollister’s blocking is a hurdle from him becoming a full-time player. Dissly is the only tight end under contract after this season. Parkinson is someone to target now in dynasty drafts. He’ll be in a much better position to break out in 2021.

Reed was selected by the Chargers No. 151 overall (fifth round). He holds the University of Virginia career kick return yardage record with 3,042 career yards. Reed is one of 10 players in FBS history with 3,000 or more career kick return yards. He averaged 2.7 receptions and 31.2 receiving yards per game at Virginia. As a runner, Reed finished his college career with 34 rushing attempts and 172 rushing yards. He’s an intriguing fantasy prospect due to his versatility.

The @Chargers just got a bolt of playmaking at wideout and in the return game ?⚡️

The Chargers can use Reed as a receiver, runner, and returner. The multifaceted weapon is eerily similar to Austin Ekeler. It would not be surprising to see Chargers offensive coordinator find ways to have Reed and Ekeler on the field together in 2020.

Benjamin was selected by the Cardinals with the No. 222 pick. He became the first Arizona State player to have 1,000 or more rushing yards in consecutive seasons since Freddie Williams in 1974 to 1975. Benjamin finished his career at the university ranked in the top-10 in rushing yards, touchdowns, attempts, and 100-yard games. He also set Arizona State’s single-game record with 312 rushing yards against Oregon State during the 2018 season. 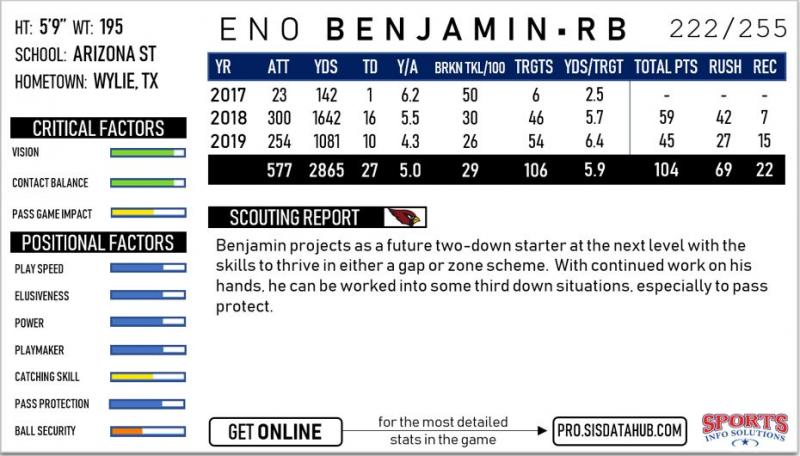 The Cardinals were in need of a third running back behind Kenyan Drake and Chase Edmonds. Benjamin is the frontrunner to address that need. This year’s draft saw the fewest number of running backs selected (16) since 2010. Don’t allow yourself to have a negative perception of Benjamin because of where he was drafted.

One of my favorite Eno Benjamin plays. Hits the defender with a hesitation jump cut. pic.twitter.com/gODDMhxo4l

The Cardinals are getting a sturdy, shifty, workhorse back with experience operating in an offensive scheme that runs a high percentage of plays from the shotgun formation. Benjamin could find himself higher on the depth chart in 2021. Drake was tagged as the Cardinals transition player and signed the guaranteed, one-year tender that’s worth $8.48 million. Contract negotiations between him and the Cardinals are ongoing. Eno is a player to target in the late third round of rookie drafts.