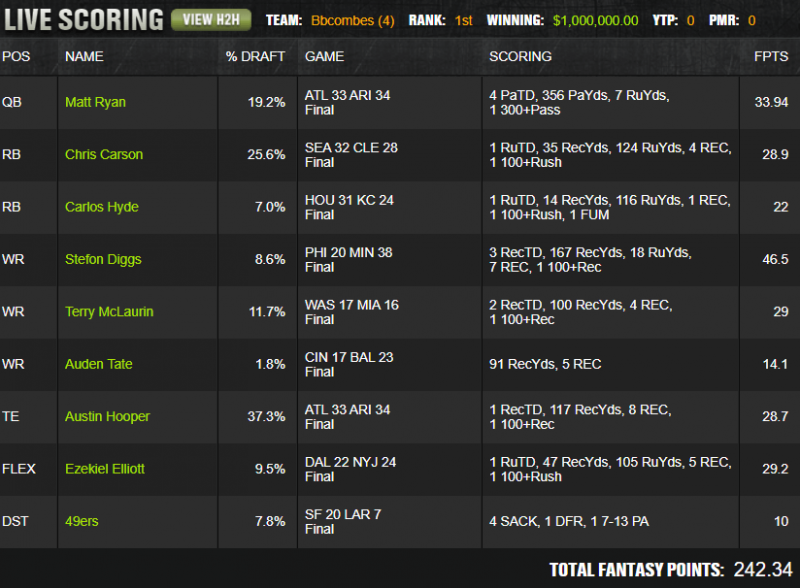 Matchups, gameflow and volume. Reading or listening to fantasy football content can begin to sound like a broken record sometimes but those three simple concepts will often point you in the right direction when narrowing down your player pool. Of course, you must plant your flag and you can never cover all of your bases but the winning Millionaire lineup this week is a reminder you often don’t have to stray from the fundamentals, even to best hundreds of thousands of other lineups. This doesn’t mean playing all chalk—Bbcombes rostered four skill position players that ended up in fewer than 10% of lineups—but it isn’t tough to see how this lineup landed on so many unpopular plays.

The biggest leverage game of the week was the Chiefs/Texans, with six players drawing double-digit ownership. It turned out that the best way to leverage that ownership was by targeting the running game of the underdog. Coming into the week, the Texans ranked 11th in neutral rush rate and with the Chiefs showing some vulnerabilities in recent weeks, an upset wasn’t as surprising as it might have been a month ago. In a high-scoring affair, all offensive players have extra scoring upside and targeting unpopular plays with a substantial role is a fantastic strategy.

Stefon Diggs benefited from an Eagles defense that funnels fantasy points to the passing game, ranking ninth against running backs but 23rd and 30th against quarterbacks and wide receivers, respectively. Despite the Vikings’ low-volume passing attack, Diggs came into the week ranked fourth in percentage of team air yards.

Given Ezekiel Elliott’s role in the Cowboys’ offense—he came into the week averaging nearly 20 touches per game despite being eased into Week 1 and being scripted out of two other weeks (one good, one bad)—this was a classic volume versus ownership play after Zeke disappointed as chalk in Week 5. He didn’t get there like we expected him to, but he got there, nonetheless. Volume is king.

The Bengals were the biggest underdog of the week so they figured to be in a pass-heavy game script. Tyler Boyd was the obvious play but Auden Tate has been seeing starter snaps and volume since John Ross’s injury. At just $4,500, Tate didn’t have to put up a monster game since his salary made room for some of the more expensive plays of the week. 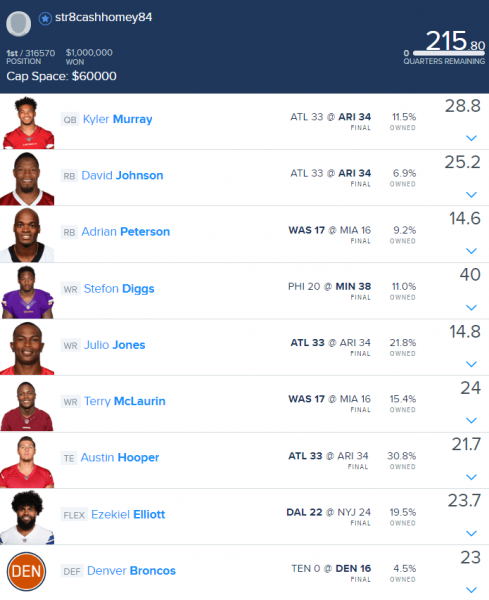 This wasn’t quite the chalk explosion we saw in Week 5, but it didn’t take a ton of creativity to get to the top of the FanDuel leader board. Stacking the Falcons/Cardinals game was a popular play but injury concerns and a late kickoff kept David Johnson’s ownership in check. By rolling out DJ in a game stack, there was plenty of room to maneuver if he was ruled out late and the lineup had to be shuffled around. No team has given up more cumulative fantasy points than the Dolphins.

Terry McLaurin became especially popular once Miami cornerback Xavien Howard was ruled out early Sunday and Bill Callahan made it clear he wanted to #EstablishIt, so rolling out a few Adrian Peterson shares as a favorite against the worst defense in the league was a fine plan. With six players from just two games, str8cashhomey84 reminded us that minimizing the number of times you have to be right in a single lineup is helpful when building GPP lineups.

Variance comes in a lot of forms. Usually, we think about variance as personal ups and downs or in terms of player performance, but variance shows up on the macro level, as well. A week ago, chalk lineups dominated the leaderboards—29 players were rostered in at least 10% of Millionaire lineups and only seven failed to score at least 10 DK points, while over a third of those plays exceeded 25 points and eight non-quarterbacks scored over 30.

Week 6 was a decent chalk week but nowhere near that of Week 5. On Sunday, 31 players exceded 10% ownership—11 failed to score at least 10 points, just nine hit the 20-point mark and no non-quarterback hit 30. There will be weeks that are even worse.

In other words, there is still some meat on the bone in NFL DFS. Games are certainly becoming more efficient but we clearly haven’t hit a point where too many players are playing so close to optimal that the games are unbeatable. If you are playing large-field GPPs, the concepts outlined at the beginning of this review should continue to guide how you formulate your player pool—staying within the confines of those concepts will help you uncover low-owned plays that aren’t blind dart throws. With a core of strong value plays and well-guided contrarian strategies, you stand to benefit from the chaos.