In DraftKings showdown contests, you pick six players from a single NFL game and fill out your $50,000 salary cap roster. You must have at least one player from each team. Each roster is made up of one captain and five flex spots. The captain spot gets his fantasy points multiplied by a factor of 1.5 but you also pay 1.5x his normal salary.

The most important part of your build is the captain spot. Since they receive 1.5x the points and cost 1.5x the salary, it is important to nail your selection. When selecting a captain, there are a few important things to consider:

Similar to full slates, lineup construction differs between cash and GPP. In cash game,s you should generally try and get four studs and two value plays into your lineup (This obviously slate dependent). Quarterbacks often have the highest floor, so it is a priority to get both quarterbacks onto your cash team. On a full slate, there are typically 2–3 strong value plays across a slate of 9–10 games, which makes it difficult to find strong value in showdown slates. Although everyone hates kickers, they are people too. People who just so happen to come with a pretty high floor that is perfect for cash games. Kickers are typically priced at about $3,000-$3,500, which is only about 6 percent of your salary cap. Let’s take a look at a Jaguars/Cowboys showdown from Week 6 of the 2018 season: 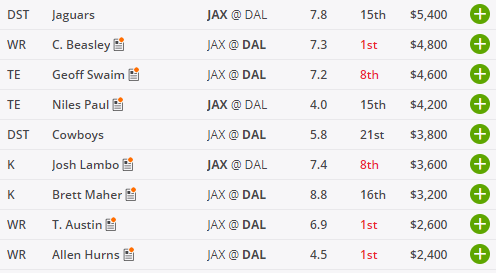 The most expensive kicker is Josh Lambo at $3,600 and he is averaging about the same amount of DraftKings points per game as the Jaguars defense and Cole Beasley but Lambo is at least $1,000 cheaper than both plays. Kickers are priced in the same range as third, fourth, or even fifth options from offenses. Using a kicker in cash, while scary, often offers you lineup flexibility to be able to fit up to four studs into your lineup.

In the example below, by using a kicker as my captain, I was able to get four of the five most expensive players and build the highest-floor team possible. Many owners will often fade a play like Dak Prescott in showdowns because they put too much value on the matchup against a tough defense, but a quarterback on a one-game slate is almost always going to be one of the highest-floor plays.

Speaking of defenses, they are almost always in play for cash as well. They will typically be priced around the same price as a kicker. Unlike a kicker, defenses come with more upside because they have the ability to score touchdowns.

It is also much more important to monitor injury news on showdown slates compared to full slate DFS games because players lower on the depth chart are in play. Players can be priced as cheap as $2,000, and become valuable pieces in games full of high-priced plays. These last-minute plays typically are not safe enough for cash, but there are scenarios where a cheap player is expected to step into an important role on a high-powered offense that makes it worth the savings.

In GPPs, there are a couple of important things to consider when building your lineup: 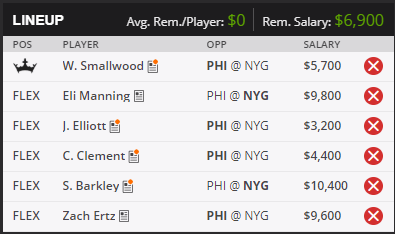 Ryan has been playing DFS since the DraftStreet and DailyJoust days. He has always specialized in NFL and took second place in the 2016 DraftKings King of The Beach live final in the Bahamas. He has been a top​-five​ ranked MLB and NFL ​DFS player on FantasyPros since 2014. H​e wouldn't consider himself a craft beer ​aficionado than ​expert​, but​ is #TeamIPA.

More from Ryan Hodge
Most Popular

DFS
Daily Fantasy: How to Structure Your Leagues for Maximum Upside, Minimum Risk