Week 15’s winning lineups from the biggest contests in DFS can be used to tease out lineup-building strategies and offer clues on how you could have landed on a similar team. Reviewing your hits and misses each week is imperative if you want to be a profitable DFS player but examining winning lineups is also a useful exercise in cultivating a winning approach.

Last week, Yahoo introduced the Million Dollar Baller, a contest that guarantees $250,000 in overlay with the chance to win $100,000. This is the best tournament structure that you will ever find and they are running it back this week, so this week’s column will take a look at the strategy that took down this contest last week. 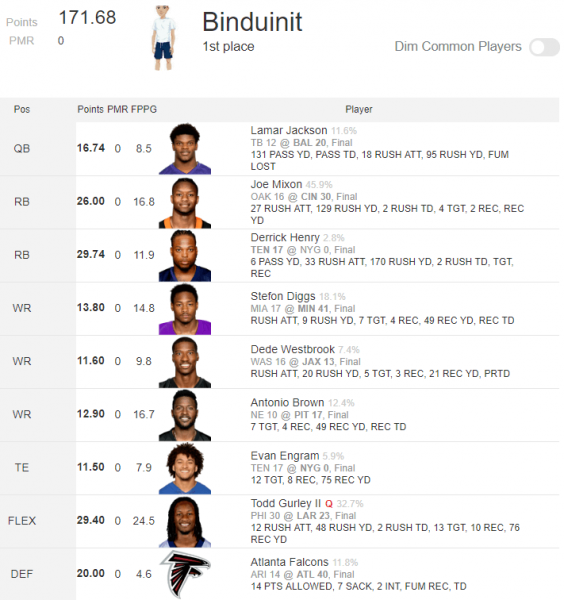 With half-PPR scoring and no bonuses, Yahoo’s scoring system mirrors FanDuel. Hence, the strategies that have been used in winning Sunday Million lineups showed up in last week’s Baller, most notably using a running back in the flex. Speaking of that flex position, what’s unique about Yahoo, compared to FanDuel and DraftKings, is that the main slate includes the Sunday night game. While late swap is still relevant on other sites that don’t include the Sunday night game, Yahoo takes it up a notch. Prior to Sunday night, every owner should look at the lineups that they are trailing. Based on the salary remaining in lineups atop the leaderboard, we can deduce which players are left on those teams. If the leaders have the same player(s) as our lineup, we can swap to a different player so that we aren’t drawing dead.

Even after Derrick Henry’s monster Week 14 game on national television, the public wasn’t buying the hype. Nevermind his four touchdowns, what should have popped is the fact that Henry had accounted for over half of Tennessee’s backfield touches in consecutive games leading up to a tilt with a Giants defense ranked last in schedule-adjusted fantasy points allowed to running backs.

On last week’s DFS MVP, I mentioned that Dede Westbrook was far too cheap on Yahoo, given his recent usage. While it took a punt return touchdown for Westbrook to hit, it reminds us that versatile players can hit more often since they aren’t handicapped if things don’t go exactly as predicted. Westbrook is Jacksonville’s best playmaker and they’ve been doing everything to get the ball in his hands, even if it doesn’t always involve the passing game.

Pat James highlighted the fact that Evan Engram was on pace for a big day in Week 14 but game script put a halt to that. With Odell Beckham out, it made sense for that usage to carry on into Week 15 and Engram served as a great leverage play off of two of his much more popular teammates, namely Saquon Barkley and Sterling Shepard.

This is the time of year when players on teams out of contention are shut down for the season or coaches start looking at the talent deeper on their roster. Week 16 isn’t quite the free-for-all that Week 17 is when teams locked into playoff spots will sit starters, but there will be plenty of situations to monitor throughout the week and there will certainly be some surprises come Sunday as it pertains to playing time. We already started to see it with players like Jaguars’ running back David Williams stealing backfield touches last week. Especially in cash games, it will be important to remember that some players that have offered safe floors all season could suddenly cede touches to backups while players like Kalen Ballage, who saw double-digit touches last week, could be auditioning for roles in 2019.