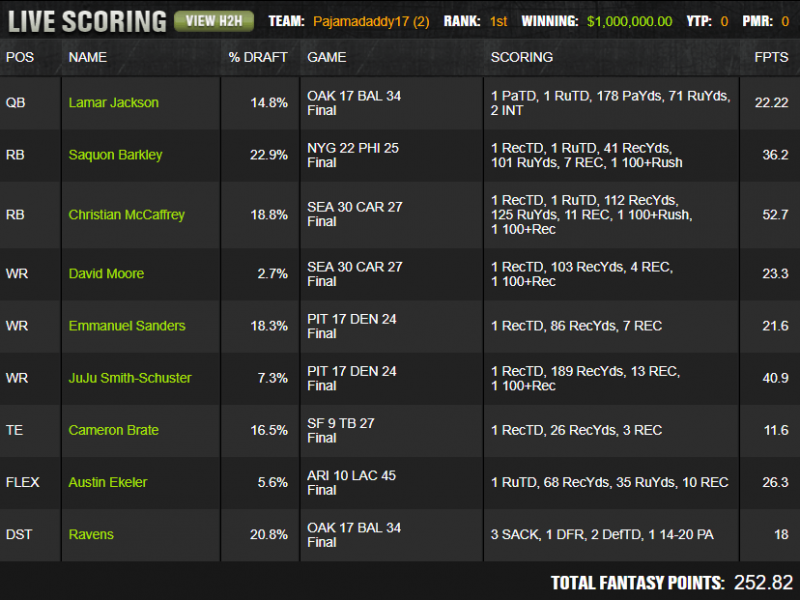 Pajamadaddy17 won the 12th Millionaire of 2018 with a strategy that isn’t often atop leaderboards, but one that we’ve certainly seen before—the “naked” quarterback, aka a quarterback that isn’t stacked with a teammate. There are few situations where this lineup build is optimal, but it can make sense. Specifically, the “naked” quarterback works when you have a signal caller who runs a lot on a team that spreads the ball around. Lamar Jackson pulled it down 27 times in Week 11 and going into Sunday, no Baltimore pass catcher had a season target share of at least 20 percent.

This isn’t to say that Pajamadaddy17 completely ignored correlation, though—this lineup included opposing pass catchers from one game and an opposing running back and pass catcher from another. As has been the case for most of the season, this team was carried by high-owned, stud running backs but the differentiators were a trio of contrarian plays.

Locking in a low-owned play isn’t about blindly throwing darts. Including unpopular plays in stacks means you have to be “right” less often than when you simply try to get every play right. In other words, have your team tell a story. We know that opposing offenses are highly correlated and Pajamadaddy17 took advantage of this fact, pairing two of his contrarian plays with chalk from an opposing team.

With Doug Baldwin nursing an injury, Pat James highlighted David Moore as a player to be overweight on in a game that had one of the highest projected totals of the week. Denver has been among the worst secondaries when it comes to long plays allowed through the air and JuJu capitalized on that weakness with a play that spanned virtually the entire field.

Melvin Gordon was supposed to be a game-time decision but it was announced well before the early games that Gordon was expected to play. Playing injured in a game where the Chargers were double-digit favorites, it was logical to think that Gordon could be limited. While it took an injury to Gordon for Austin Ekeler to have a big role in the second half, expecting Ekeler to have an increased workload in this game was a fair assumption. 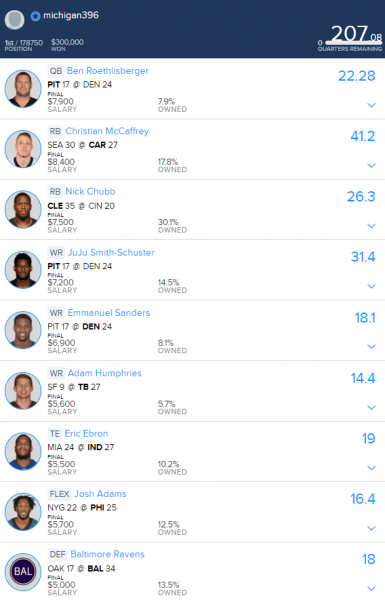 For the 11th time in 12 weeks, the winning Sunday Million lineup used a running back in the flex spot, emphasizing one of the more dominant trends that we’ve seen in tournament play this season. With no players owned in fewer than five percent of lineups, michigan396 used a method that we preach weekly here at 4for4—find a low-owned stack to pair with a solid player core. The Steelers passing game was emphasized as a play to be overweight on in Week 12’s Slate Breakdown. michigan396 took it a step further, adding Emmanuel Sanders for an opposing passing game stack.

The Steelers/Broncos game carried one of the highest over/unders of the week but Pittsburgh is one of the worst on-paper matchups for wide receivers. With Demaryius Thomas no longer in Denver, Sanders is the Broncos’ primary pass catcher and was underpriced relative to his expected volume and touchdown equity. In a potential shootout, the bad matchup should actually encourage ownership since the public is likely to fade such a play.

Adam Humphries wasn’t just an overweight suggestion in last week’s breakdown but a player that should have been considered as a core play. His recent snap share eclipsed all Tampa Bay pass catchers not named Evans, and San Francisco has been one of the worst teams against slot receivers this season.

NFL coaches often discuss the season as broken up into four quarters, game planning and looking at their record in four-game chunks. As DFS players, we can benefit by paying attention to this strategy, looking for trends that have changed throughout the season, rather than relying solely on season-long data. One stat that reflects how offenses want to operate is pass/run splits in neutral game script. When the score doesn’t dictate how a team is calling plays—passing when behind or running with a lead—we can gain insight into how coaches prefer to conduct their offense. Since neutral game script is where most plays take place—60 percent of plays this season have been when the score was within seven points—understanding how an offense operates is valuable for favorites and underdogs alike.

Now 12 weeks into the season, we can look for teams that might have changed their philosophy since Week 1. Below is a table of each team’s neutral passing rate, broken down into four-week windows followed by some key points to take note of.