Each year I build a machine learning model to project NFL receivers. This season I incorporated Pro Football Focus offensive line and overall team grades into the model. It weights previous season opportunity highly, along with career efficiency and quarterback play. The model knows which players have changed teams, and it sports a robust out of sample r-squared of 0.57.

After I ran the model, I took the results and ranked the players by PPR points per game and compared them to best-ball average draft position (ADP). Below are the three players upon which the model disagrees the most with the public, and who represent the best possibility for a return on value at their ADPs. All route data is courtesy of Sports Info Solutions.

It seems every year Mike Wallace is on a buy-low list. This year, however, the argument for Wallace being undervalued by the public is fairly straightforward. He’s joined a talented Philadelphia Eagles team and is an upgrade over the receiver he's replacing in Doug Pederson’s system, Torrey Smith.

When targeting wide receivers in 2017, the Eagles favored four routes: Slants, Curls, Go routes, and Digs. Slants especially are a favorite of the Eagles, and it was their most frequently targeted route out wide. The table is nicely set for Wallace to see his fair share of opportunity in 2018.

Wallace is far from a sure thing, of course. His efficiency by depth over his career is below average at most depths past 15 yards, mostly due to the fact he isn’t much of a yards-after-the-catch guy. 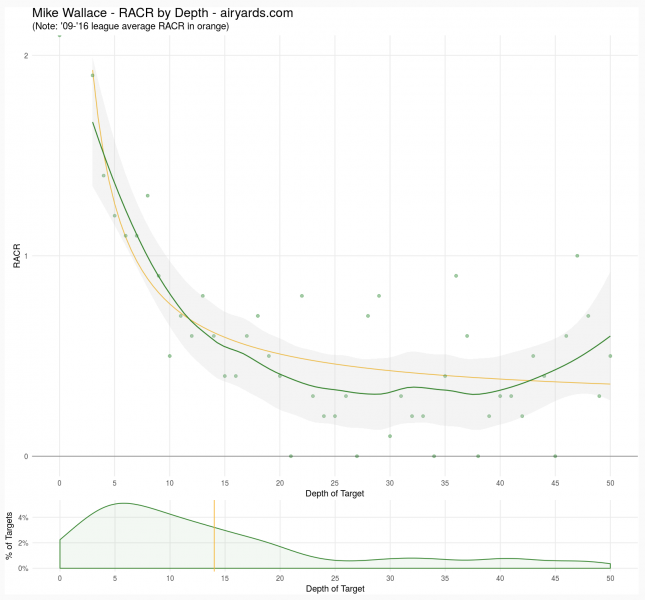 What Wallace still possesses is elite speed. His Fastness Above Positional Average (FAPA) in 2017 was 14. While this was lower than the 36 he posted in 2016, Wallace remains a problem for opposing defenses when sent deep. 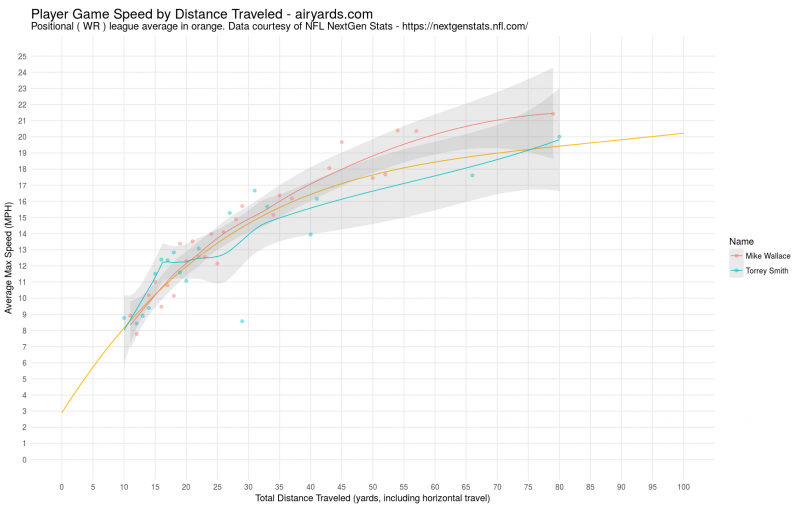 With a positional ADP of WR70, Wallace costs almost nothing. If you couple his solid speed with Pederson’s scheme and good quarterback play, the model’s prediction of nearly 12 PPR points per game doesn’t appear ridiculous. In best-ball formats especially, taking a flier on Wallace could net you a handful of week-winning performances throughout the season.

Last season, Matthews quietly tied for the lead in target share on the Titans (19%). He paired that with a 26 percent share of team air yards. The combination of the two measures of opportunity pushed him past Corey Davis (ADP WR36) as the receiver with the highest Weighted Opportunity Rating (WOPR) on the team. Matthews finished the 2017 season as the No. 38 scoring receiver in PPR formats.

This year, the model sees both his career efficiency and previous year volume as indicators he will again lead the team in fantasy scoring. Corey Davis and a healthy tight end duo of Delanie Walker and Jonnu Smith will cap his ceiling, but it is probable that Matthews represents a market mispricing. Matthews has been better than league average at most depths on the field over his career, and while Davis remains an intriguing prospect, the smart play is to bet on the guy who has proven he can succeed at the NFL level. Davis is going 20 slots higher than Matthews in best-ball positional ADP, which is incredibly optimistic. 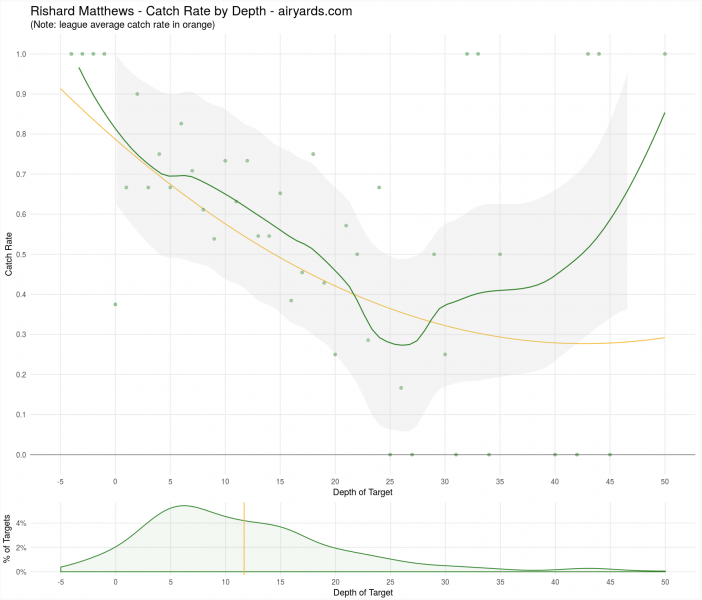 The Titans throw Curls at a high rate from both the slot and wide. A total of 78 targets were devoted to that route in 2017. From the slot especially, Matthews should continue to see a regular stream of catchable, highly efficient targets in the Titans' offense. Let the public chase the unproven mystery box that is Corey Davis while you scoop up reliable value in the form of Rishard Matthews.

DeSean Jackson is a touchdown-dependent deep threat capable of high-scoring weeks followed by extremely sad three-target, 20-yard games. This boom/bust profile is aggravating in a typical season-long league, but it’s quite useful in best-ball leagues. This is one reason why it’s surprising to see Jackson drafted so low in the best-ball formats we have ADP data for.

Jackson’s career numbers are excellent at nearly all depths, which is rare, and his reliability deep is special. He will never supplant Mike Evans as the team’s top passing game target, but the model suggests a positive return on a WR55 ADP is very possible. 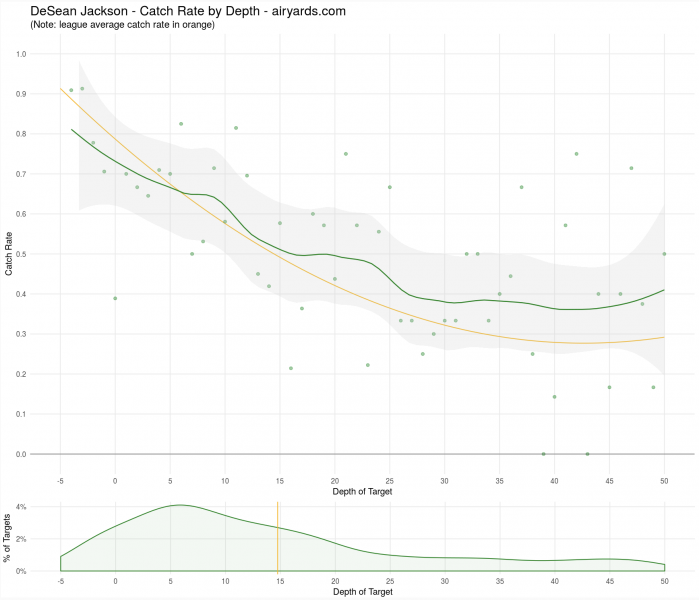 One potential reason for concern for a deep burner like Jackson is a loss of speed. In 2016, Jackson posted a 29.4 FAPA and just a 5.2 FAPA in 2017, according to NFL NextGen player tracking data. While still faster than league average, the decline in speed is notable.

A bet on Jackson at WR55 is one with significant upside at a relatively low cost. When split out wide, Jackson was targeted on 11 Go routes, but only two were catchable (he caught one). If he can convert on his opportunities deep early in the season his targets will increase. Much of his success will rest on the deep ball accuracy of Jameis Winston. But even if you aren't sold on Winston's ability, simple regression to the mean suggests better things are in store for Jackson in 2018.

More from Josh Hermsmeyer
Most Popular

Best Ball
How to Win Best-Ball Leagues: MFL10 vs Draft