Analyzing last week's results is one of the best investments of time you can make as a DFS player. Here I analyze winning lineups, low-owned players, and other notable Week 2 takeaways that can be used to gain an edge going forward. 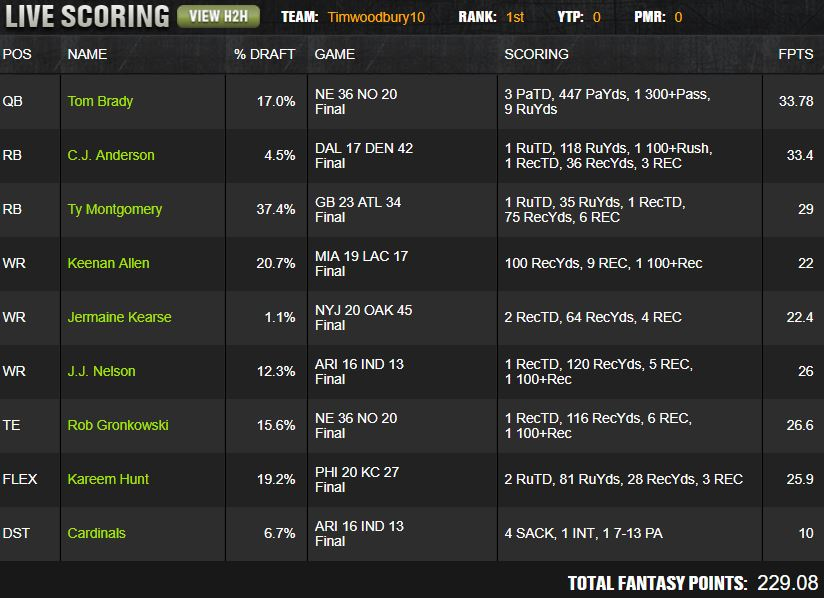 Timwoodbury10’s winning lineup was built around a pairing of Tom Brady and Rob Gronkowski, whose Patriots had the highest implied team total of the week (it closed at 30.25). Among QBs, Brady was second in our ceiling projections and tied for second in projected odds to hit GPP value (available to DFS subscribers via our GPP Leverage Scores page), while Gronk topped all TEs in both categories.

As discussed in the DFS Playbook, we tend to see one contrarian play among chalk at RB in winning tournament lineups, which was the case with C.J. Anderson offsetting the ownership of Ty Montgomery and Kareem Hunt. The Chiefs rookie phenom came in third in both projected odds of hitting cash and GPP value, but Montgomery was more of a safe play, coming in fourth in cash odds but seventh in GPP odds, with a second TD putting him over the top.

Keenan Allen’s $5,800 salary was too low given his penchant for racking up high-percentage targets (he’s now $7,200), and he was the only WR below $6,000 who we had projected odds of hitting GPP value of at least 8.0%. J.J. Nelson usually scores most of his points the opposite way, and stayed true to form by catching a TD on a deep target from Carson Palmer (deep targets are the most valuable in fantasy). With John Brown ruled out, Nelson shot up to our No. 4 WR under $4,000 in projected odds to hit GPP value last week.

DST is the lowest-scoring position, and thus you can get away with not necessarily nailing the top scorer more than at other positions. This was the case here, as six DSTs outscored the Cardinals.

If you were among the 98.9% who did not own Jermaine Kearse, how could you have landed on him?

We know from TJ Hernandez’s Big Game Profile series that WRs who put up big games are on the favorite and/or the winning team less often than any other position. We also learned from my DFS Playbook series that targets are the best predictor of WR production early in the season. After 9 targets in Week 1, Kearse was a prime example. Kearse was ranked fourth in ceiling and fifth in projected odds to hit GPP value among WRs under $4,000.

If you were among the 95.5% who did not own C.J. Anderson, how could you have landed on him?

Anderson checked three of the four boxes off of the contrarian RB profile: a salary in the $4,000s or $5,000s, ranked in the top 25, and projected for at least 14.5 touches. He only failed to meet the criteria of the opponent being ranked 17th or worse against RBs (the Cowboys were ranked 11th), but certainly, no one thinks of the Cowboys as a shutdown run defense.