DFS Playbook: How to Pick a Wide Receiver

Three starters mean DFS players make more decisions about WRs than any other position. I will present proven ways to ensure those decisions lead to max profits.

First up will be how to make the most accurate wide receiver projections. Next, how to maximize the rate at which your wide receivers hit value relative to their salary. After that, interesting data that says fantasy points allowed leads us astray. Finally, the deconstruction of first-place lineups to reveal winners' million-dollar secrets at WR.

Projecting any oter position involves a straightforward process and clear point of emphasis. But projecting WR is complex because they score in more ways and situations.

Gadget plays aside, every scoring opportunity for a wide receiver has to start with a target. But average target depth varies. It's less than 7 for a high-percentage route runner like Jarvis Landry. And it's more than 17 for a lid-lifting deep threat like DeSean Jackson. The result? Not all opportunities are created equal.

No particular type of efficiency will ensure fantasy success. And no particular type of inefficiency will prevent fantasy success. Take the top 12 last season, for instance. It included catch rates from Mike Evans' 55.5% to Michael Thomas' 76.1%, yards per catch averages from Larry Fitzgerald's 9.6 Julio Jones' 17.0, and TD rates from T.Y Hilton's 3.9% Davante Adams' 9.9%.

But production itself becomes the best barometer as sample size grows:

A target, unlike other usage stats such as pass attempts and carries, often involves skill. Save for bubble screens and so on, a target requires gaining separation and getting open. Then the quarterback has to be able locate the open man, while blocking has to give all this time to develop. Skill of the other receivers on the field also plays into which receiver is the target. And because some targets are deeper downfield, production becomes more predictive than targets.

Take the struggles of Allen Robinson, Brandon Marshall, and DeAndre Hopkins in 2016. Going into Week 10, all three ranked outside the top 30 in fantasy scoring despite top-12 ranks in targets. While eight or nine games is not a large sample size in the big picture, it's enough in daily fantasy football. The trio's struggles were indicative of a larger problem, and none of them managed to rebound. Nine-plus targets per game? That's nice—unless they're from Blake Bortles, Ryan Fitzpatrick, or Brock Osweiler.

It works both ways of course. Tyreek Hill was still a DFS afterthought to many last season as late as Week 12. Despite top-25 numbers, Hill averaged only 6.0 targets per game in Weeks 7–11. But that production on limited volume was a precursor to a top-five fantasy finish the rest of the way.

Unbeknownst to you and I, Jeremy Maclin played with a torn groin in 2016. Unreported injuries are yet another reason to note recent production. Regression to the mean occurs not only due to random statistical luck. Many very real factors affect production, and they will take time to even out.

Getting targets in your lineup will make you a solid DFS player. But you won't have a true edge unless you play WRs who produce more than volume suggests.

2. Account for the Factors That Impact Wide Receiver Production

Below are critical factors that influence projected opportunity and/or efficiency.

To optimize your DFS lineup, you need to account for the volatile scoring expectation of WR. Below is a formula that adjusts for positional- and salary-based expectation. It calculates the amount of points to target from a WR in cash games:

The data suggests a minimum-priced WR needs to score ~14 points on DraftKings and ~11 on FanDuel to hit value. For context, to score 14 DraftKings points or 11 FanDuel points, a WR has needed an average of ~8 targets and 5 catches.

1. Tailor Your Selections to Site Scoring Format (and Pricing)

DraftKings: Target Receptions and Don't Shy Away from Paying Up for Studs

Every week, you will inevitably have to decide whether to play or fade an expensive WR. Instances of a WR priced $8,000+ have occurred more at WR than every other position combined over the past two years. While WRs in the low-$8,000s have struggled, those priced in the mid-$8,000s and above have been consistent:

Provided it has not been at the expense of a stud RB, paying up at WR has been a +EV move in DraftKings cash games.

WRs needed almost a half-reception more on DraftKings (6.92) than on FanDuel (6.49) to hit value. To hit value at a salary below $5,000, a WR has needed an average of 5.8 receptions. But roughly 30% of WRs hit value without a TD, higher than on FanDuel. That means DraftKings scoring favors high-volume types that don't necessarily score many TDs. Think Jarvis Landry, Stefon Diggs, etc.

Emphasizing red zone targets works well to maximize the floor of a FanDuel lineup. I know, I know. That may be counterintuitive since TDs have a lot of variance. But it's difficult for a WR to score enough FanDuel points without a trip to the paint.

A salary of $7,500 has been a crossroads of sorts for WR. A sharp increase in consistency occurs above that mark, but a sharp decrease occurs below it.

Salary algorithms consider recent performance, and that's the effect of TD-dependent scoring. WRs may endure TD droughts, but don't drop below the mid-$7,000s before regression causes a correction. At the same time, TD luck is unsustainable for WRs who belonged in the $6,000s to begin with. Again, here's a situation in which you don't want to overreact to recent production over a few games. But as the sample size of games begins to mount, you want to start to take it more serious.

Thus, WR fantasy production is not changed much whether his team is the favorite or the underdog. WR scoring and Vegas odds have a less pronounced relationship than other positions: 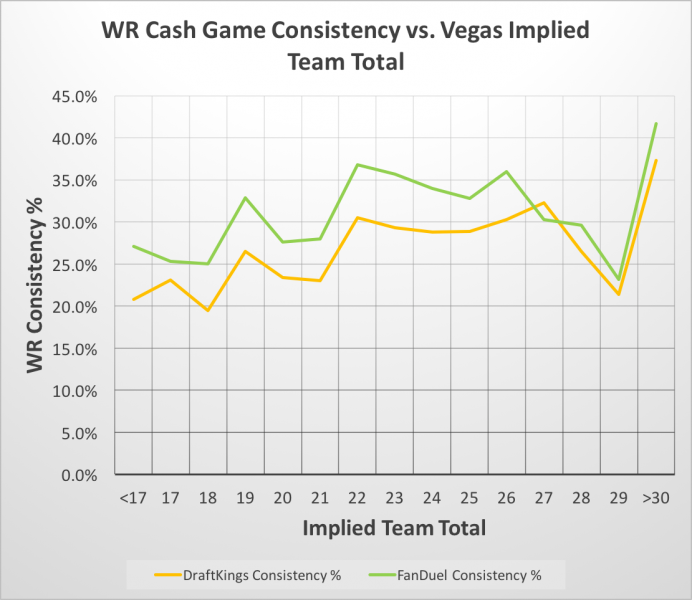 An implied team total below 22 has been where consistency has fallen off a cliff. I'm inclined to go with this benchmark because quarterback consistency also has a sharp dip at 22.

Consistency dipped on DraftKings at 28–30 implied points and FanDuel at 27–30. This dynamic is likely due to implied total being a variable in salary algorithms. It suggests paying up at WR for an extra implied point or two could end up being a trap at times.

Once an implied team total has cracked 30, there is a massive rise in consistency. Vegas doesn't project a team for 30+ often, but when it does, you should treat it as a wide receiver cheat code.

Fantasy points allowed contains noise—especially when not adjusted for strength of schedule. Even so, it's still worthwhile to be aware of since it influences the decision making of many DFS players. Turns out you would have been best off targeting a defense with a mediocre ranking than a poor ranking.

A WR who straight-up flops in what looked like a great matchup on paper has no doubt prompted many a tilt. The data above shows why. Consistency is not guaranteed from a great on-paper matchup any more than it is from a so-so one. Raw fantasy points allowed data shows top-five defenses are not to tangle with. Besides that, it does not provide an edge. Strength of schedule has a major impact—using schedule-adjusted fantasy points is crucial.

Wide receiver matchups are complex. Another way to gain an edge is drilling down to individual matchups. Last season, 14 of 32 teams had a gap of at least 10 between their ranking versus No. 1 wide receivers and and No. 2 wide receivers, according to Football Outsiders' DVOA. Being keen on if a defense is vulnerable against No. 2s or slot receivers is key—those players often carry lower salaries and ownership in DFS.

Note: Data in this section was compiled from first-place lineups in the 2015-16 DraftKings Millionaire Maker and FanDuel Sunday Million guaranteed prize pool tournaments.

You need to have the nuts at WR if you don't want to end up drawing dead in a GPP. In a typical first-place lineup, WRs score the most points and have the most correlation with other players.

There was nothing fancy about how first-place lineups have went about locking in upside at WR—they simply paid up more often than not. Spending at WR was more balanced in the FanDuel lineups. On DraftKings, lineups tended towards a stars-and-scrubs approach favoring two studs, which makes sense given the position's increased upside due to PPR scoring.

Jordy Nelson was in the first-place Sunday Million lineup a staggering six times in 2016. Over one-third of WRs to appear in either site's first-place lineup in a given week did so again later that season. Over 40% of WRs to hit either benchmark in a given season have repeated in the same season at least once.

How did Jordy end up in so many first-place lineups? He was the only player in the NFL to have more than 25 red zone targets and 15 inside-the-10 targets. League-wide scarcity of close-proximity targets for any one receiver results in variance. That variance has an effect on both volume and efficiency. This can lead to down weeks, and oftentimes a depressed salary. Exploit this by targeting receivers who get a large share of targets in scoring position.

Deep targets are more common1 than red zone targets. Both are volatile due to a sub-50% average completion rate. Some of the deep-ball WRs that made it into 2016's first-place lineups include J.J. Nelson, Sammie Coates, Travis Benjamin, Mike Wallace, and DeSean Jackson.

Make sure that there's not a mismatch from a pass-rushing standpoint in the given game. This would will fail to afford the quarterback time to look deep.

2. Use a Chalk Play and a Contrarian Play

As far as ownership, first-place lineups have ridden the barbell approach to victory. They combined a highly owned player at the position with one that's low owned:

You want to make sure your lineup has differentiation—enough to take down the grand prize. You could go about this by classifying potential WR plays as chalk, contrarian, and other, then making sure you use at least one contrarian play, as well as (usually) no more than one chalk play.

3. Utilize Correlation by Stacking with Teammates and Opponents

Still not a 4for4 DFS subscriber? Sign up now or learn more.

DFS
The Definitive Guide to Stacking on FanDuel
Read more