Analyzing last week's results is one of the best investments of time you can make as a DFS player. Here I analyze winning lineups, low-owned players, and other notable Week 1 takeaways that can be used to gain an edge going forward.

Note: This article is a FREE sample of premium content normally reserved for 4for4 DFS subscribers and will go behind the paywall next week. Not a DFS subscriber? Subscribe or upgrade now! 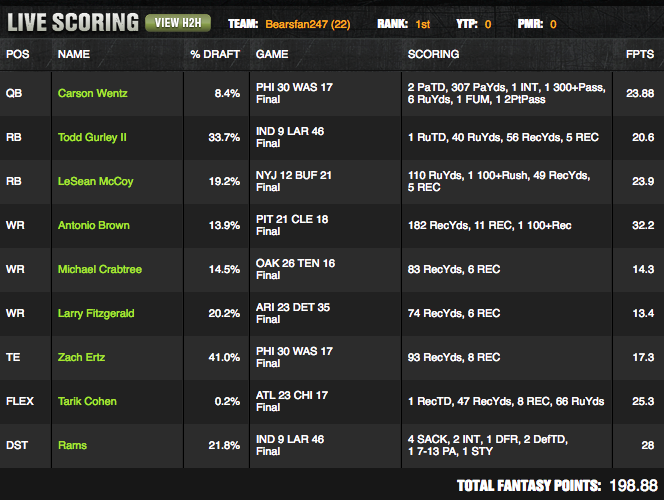 In a week where 10-of-12 games on the main slate went under their respective Vegas total, including all the games with the highest owned QBs and WRs, doing well was simply about avoiding landmines (I'm looking at you, LeVeon Bell) and having a few of the slate's true difference makers more than it was about having a near-perfect lineup. Those difference makers were Antonio Brown (7.8 points higher than any other WR), the Rams D/ST (one of seven players to score 28+), and Tarik Cohen (highest-scoring RB). More on Cohen later, but note that both Brown and Rams D/ST were the top ranked player at their positions in our projected odds to hit GPP value. Of course, LeVeon Bell was the top projected player in GPP odds and ended up being a $9,800 torpedo. Every player has relatively low GPP odds, so what was more surprising was that Bell realized his 27% odds of not hitting cash value and his ~15% odds of falling below his 12+ point projected floor. How? It was due mostly to something I'll talk about more in a bit: poor offensive line play. Cleveland's defense outplayed Pittsburgh's offensive line, and Bell couldn't muster a run longer than 5 yards until a game-sealing 15-yard scamper with 2:28 left in the fourth quarter.

The rest of Bearsfan247's lineup was filled out by predictable players who produced scores at or slightly above their median projection and could have also been identified by using our projected GPP odds: LeSean McCoy (No. 3) and Todd Gurley (No. 5) both ranked top-five among RBs, Larry Fitzgerald (No. 4) and Michael Crabtree (No. 7) both ranked top-seven among WRs, and Zach Ertz was third among TEs.

If you were among the 99.8% who did not own Tarik Cohen, how could you have landed on him?

A strong preseason in which Cohen rushed 19 times for 121 yards, Jordan Howard’s lackluster receiving performance, preseason rumblings of an increased role for Cohen, and a Falcons defense that allowed the most receptions to running backs last season (106) all combined to subtly hint Cohen could be a cheap source of Week 1 points.

If you were among the 91.6% who did not own Carson Wentz, how could you have landed on him?

Wentz was our top-rated QB by Value on the Week 1 main slate. Also, stacking Wentz with Zach Ertz was a leverage play; Wentz was in only one-fifth as many lineups as Ertz despite quarterback and tight end being one of the strongest teammate correlations. Ertz ended up accounting for 30% of Wentz’s yardage. 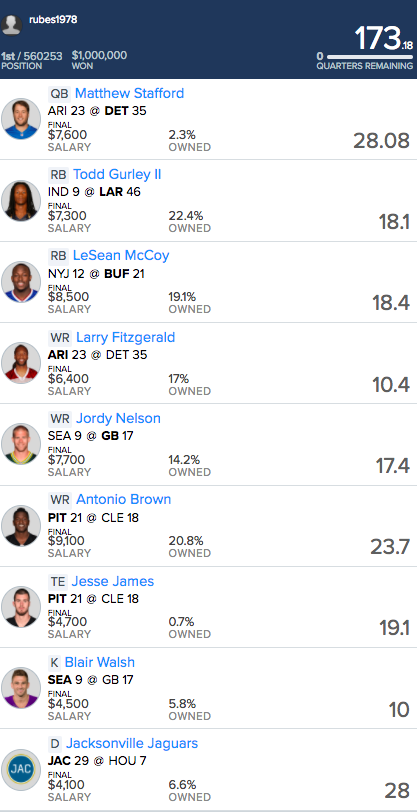 This lineup is crafty, gaining differentiation by not only stacking a unique pair of Steelers pass catchers in Jesse James and Antonio Brown, but also by saving $600 at QB and going with Matthew Stafford instead of completing the stack with Ben Roethlisberger. More on Stafford and James in a moment, but once again, the core of rubes1978's lineup had strong GPP odds: LeSean McCoy (No. 3) and Todd Gurley (No. 4) were top-four among RBs, and Antonio Brown (No. 1), Jordy Nelson (No. 5), and Larry Fitzgerald (No. 7) were top-seven among WRs.

If you were among the 99.3% who did not own Jesse James, how could you have landed on him?

TJ Hernandez found that the year-to-year correlation of defenses who finish at either extreme in fantasy points allowed is fairly sticky, and the Browns allowed an NFL-high 13 TD catches to tight ends last season. Coming into the game, we had the Browns projected 31st in RB aFPA and James had a top-10 GPP Leverage Score. The same is true in redraft leagues and DFS: value in the form of tight ends attached to the league’s premier quarterbacks tends to go overlooked.

If you were among the 97.7% who did not own Matthew Stafford, how could you have landed on him?

If you were among the 93.4% who did not own Jaguars D/ST, how could you have landed on them?

The Jags were Justin Bailey’s favorite Week 1 DST on FanDuel and I called them a glitch because they were priced $100 above the minimum on FanDuel, despite being the third-most expensive D/ST on DraftKings. Despite road underdog status, the Jaguars were playing in a game with an over/under below 40 against an inexperienced quarterback in Tom Savage and an injury-ravaged offensive line starting a converted tight end at left tackle.

Vegas odds provide a means of increasing hit rate at the one-starter positions by tipping us off as to when players at those positions are in favorable spots, but lately I’ve become increasingly aware of a more unheralded edge the Vegas lines provide: many DFS players give the Vegas lines more credence than they should, particularly as it relates to over/unders and implied team totals.

There’s a reason why being on the winning team has a 10–20% advantage in terms of representation in TJ Hernandez’s Big Game Profiles: Vegas isn’t always right; it’s simply right more often than not. That means the biggest edge comes from correctly identifying the games Vegas has wrong, because odds are, most DFS players will have them wrong, too.

For example, while a lot of Week 1 ownership was concentrated in the Titans-Raiders and Packers-Seahawks passing games because each game had an over/under of 50 points or more, it was the Lions passing game that proved to be the most fruitful, with Matthew Stafford, Golden Tate, and Kenny Golladay all finishing among the top-three scorers at their respective positions. While the Lions' implied total of 23.5 points implied three TDs max, the Lions ended up scoring four TDs on offense (all Stafford passes) and one more on defense to beat their implied total by 11.5.

The same was true at D/ST: the Rams, Jaguars, and Ravens all were 25-point fantasy scorers thanks to holding their opponent under their implied point total by 12, 15, and 20 points, respectively.

Vegas lines are best used as pivot points for taking a stand on a game rather than as gospel as to exactly how many points a team will score. One likely reason the average game or team scores fall pretty far from its respective Vegas projection is that the Vegas lines don’t seem to fully take into account the battle in the trenches. Ten of the 15 Week 1 games failed to go over the Vegas total, and poor offensive line play was a major culprit. NFL teams averaged only 3.6 yards per carry (0.6 yards below the 2016 league average) and nine-of-30 teams failed to crack 3.0 yards per carry. Teams also combined to allow a 7.1% sack rate, which is up from the 2016 league average of 5.8%.

Another reason games fall far from Vegas projections is Vegas projections don't seem to fully account for play-calling tendencies. An aggressive, pass-heavy offense can more easily rebound from unforeseen hitches because incompletions stop the clock, while a struggling run-heavy offense will afford its players fewer opportunities to salvage a game. Combine two aggressive offenses and the game is probably a safer bet to go over, but combine two run-heavy offenses, and there's some added risk of it going under. Overall, play-calling tendencies usually won't tell the whole story; however, early-down tendencies are more revealing. For example, on first or second down in the first half outside of two minutes, the Jaguars and Titans were both bottom-three teams in pass play rate in Week 1, and both offenses finished in the bottom six last season as well. With both teams taking a conservative, clock-eating approach, there are less avenues for each team or the game as a whole to go over the Vegas total. On the flip side, the Packers were third and the Falcons 12th in pass play rate in Week 1, respectively, and both teams were among the top six last year as well (though Atlanta had a different offensive coordinator). Even with an over/under set at 53, these teams have more avenues to hit the over if their early-game play-calling trends continue. In fact, over the past 10 years, 51.8% of regular season games with an over/under of 53+ have gone over, which is higher than the average of all games (48.5%). What's more, 74% of the games to go over have featured at least 60 combined points, and 30% have featured 70+ combined points.

As the season progresses, Vegas lines will undoubtedly be of use in many instances. But it's important to keep in mind lines move based on public betting action, and thus come to essentially represent the average public perception. Since the aim in DFS is to be above average, picking the correct spots to divert is key to long-term profitability.