Raybon's Review: What We Learned From Week 3 DFS on FanDuel & DraftKings 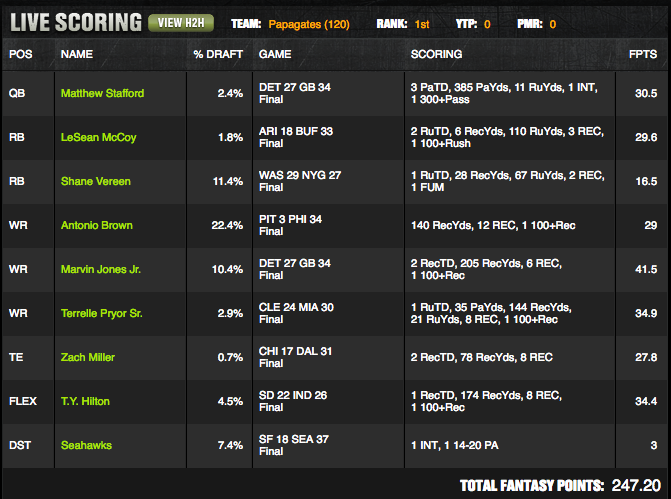 A couple of things stand out in PapaGates' lineup, with the first being that he exploited the opposing passing game correlations I discussed in The Definitive Guide to Stacking on DraftKings. Opposing QBs and WR1s are correlated, making the Matthew Stafford-Marvin Jones stack a nice leverage play off the Aaron Rodgers-Jordy Nelson stack at lower cost.

The other thing that stands out is PapaGates did what looks like an excellent job of reacting to late-breaking news. While it's possible he intended to play Shane Vereen and Terrelle Pryor all along, it's more likely that he inserted them on Sunday morning after the news broke that Vereen would start with Rashad Jennings out and Pryor would take reps at QB. Reacting to late-breaking news is tricky, as you can easily get caught up in overreacting and tinkering too much with your lineups. However, both Vereen and Pryor represented low-cost investments, and ownership for both was held in check because not everyone checks or adjusts based on Sunday morning news. PapaGates also made the right call by not reacting to the news that the Lions-Packers game would be rainy and windy. When you see late-breaking news, ask yourself how you can best leverage it, and if you can't, don't make any changes. In the case of Vereen and Pryor, there was leverage to be had in potentially getting high-volume players at low ownership. On the other hand, in the case of potential poor weather in Green Bay, if your process led you to identify the players involved in the game as strong plays, the best way to react would be by not reacting, leveraging the fact that the players' ownership will likely be reduced because other DFS players will remove players in that game from their lineups. 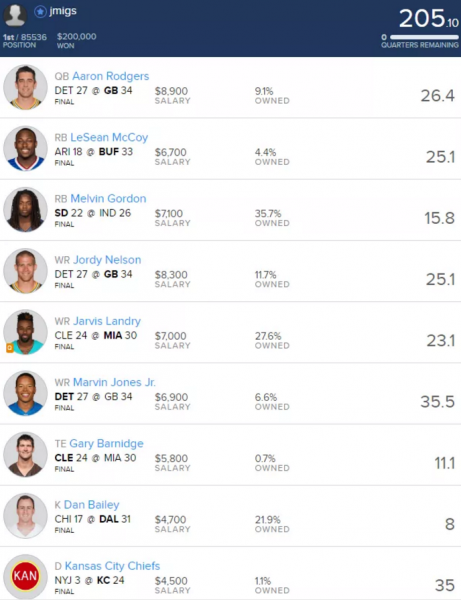 Jmigs won the Sunday Million by utilizing opposing passing game correlations, using the more popular Aaron Rodgers-Jordy Nelson stack paired with Marvin Jones in the same game, which worked out beautifully, as Rodgers and Nelson connected for two scores early and then Jones went bonkers when the Lions went into comeback mode.

This lineup is consistent with my research of winning lineups that revealed that one chalk play tends to be okay at RB and WR.

Give 4for4's TJ Hernandez some props for writing up LeSean McCoy in his Week 3 FanDuel GPP column; TJ astutely noticed the reverse line movement could be favorable for McCoy.

The Chiefs defense was a key play in this lineup. Many times, certain defenses that fit the ideal profile (home favorite) will go overlooked because of a matchup that is deemed average. The Jets were coming off a huge offensive game the week before, but sometimes that's what you want: a team that isn't afraid to put the ball in the air. Just as RBs need touches and receivers need targets, fantasy defenses need to see pass attempts in order to rack up sacks and interceptions.