It's nearly impossible to be a profitable NFL DFS player over the long term if you're not good at selecting wide receivers. In this article I’ll show you the makeup of a valuable wide receiver, how to identify the top values in a given week, and how to tailor your approach at the position depending on whether you're playing a cash game or a tournament.

The Makeup of A Valuable DFS Wide Receiver

Let's play a game. I'll give you a stat and where it ranked among the 71 wide receivers who drew at least 50 targets in 2015, but I won't name the player just yet. Based off that stat, you tell me whether the wide receiver sounds like someone who you would usually play or fade in DFS.

How about a touchdown rate of 3.9 percent, which ranked 50th of 71. Doesn't look like he has too much upside, right?

Finally, what about 13.49 yards per reception, which ranked 35th of 71. At least it's in the top half, but you're aiming for more than mediocre, no?

In order, those stats came from Allen Robinson, Julio Jones, and Antonio Brown. You don't need me to tell you they were all top-six fantasy wide receivers in 2015.

Fantasy success is possible for a wide receiver that fits pretty much any statistical profile -- provided he gets the ball:

Opportunity drives wide receiver fantasy productivity more so than per-play efficiency does. I've said it before and I'll say it again: target targets.

Targets are the most predictable week-to-week stat for wide receivers, and with receptions and yardage combining to account for roughly 80 percent of the average wide receiver's production, an increase in targets will lead to a higher floor and a higher ceiling. Consider the following:

To be clear, the fact that targets correlate the most strongly with fantasy production doesn't mean you should favor opportunity at the expense of talent. Drawing a target at the wide receiver position often requires considerable skill in getting open (save for screens, forced throws, etc.). In fact, I view target market share as part opportunity metric, part efficiency metric.

Though receptions and yardage account for the majority of a wide receiver's fantasy production on average, average isn't enough when you're looking for week-winning upside. That's where touchdowns come in:

It's rare for a wide receiver to reach 25 DraftKings points or 20 FanDuel points without scoring at least one touchdown, and it requires multiple touchdowns roughly 40 percent of the time.

The numerous intricacies of wide receiver matchups warrants a separate article (if not a book), but in the interest of brevity, I'm going to discuss a way you can exploit cornerback matchups.

When determining the best matchups for wide receivers, most DFS players will naturally look at fantasy points allowed to wide receivers. However, this metric cannot always be taken at face value because it does not account for a potential talent disparity between a defense's cornerbacks.

The most obvious example comes when a defense has a high-level top cornerback, especially if he is allowed to shadow the opposition's top wide receiver. The offense will often be forced to throw to their other wide receivers more. This situation occurred in the first half of the Jets' Week 2 matchup against the Colts in 2015. The Colts' Pro Bowl corner Vontae Davis was on the Jets' top target, Brandon Marshall, on the majority of snaps, and as a result, Eric Decker racked up an 8-97-1 line on 10 targets in the first half while Marshall was only targeted five times. (Marshall later rebounded in the second half to finish with a 7-101-1 line, but that was after both Davis and Decker got hurt in the second half.)

Another thing that won't always be reflected in fantasy points allowed to wide receivers is cornerback injuries. As the season wears on, corners will inevitably miss time with injury, and most NFL teams struggle with cornerback depth. As a result, a defense can many times be forced to field a replacement-level cornerback, who the offense will in turn target relentlessly with whichever wide receiver that corner is covering.

Of the nine games Alshon Jeffery played in 2015, he was only truly healthy for four -- and what a four-game stretch it was. Jeffery averaged 13 targets, 7.5 receptions, 115 yards, and 0.5 touchdowns last year when completely absent from the injury report. But in the five games that Jeffery turned up on the injury report with various calf, groin, and hamstring injuries, those numbers precipitously dropped to 8.4 targets, 4.8 receptions, 69 yards, and 0.4 touchdowns.

Unfortunately, Jeffery was not an outlier; wide receivers tend to see a dip in production when they play through injury:

A questionable (or doubtful) tag on a wide receiver can significantly hurt a wide receiver's fantasy value. The 15 percent average dip in production is major in a game where you’re trying to squeeze as many fantasy points as you can out of each salary cap dollar.

When wide receivers get a probable tag, the type of injury becomes more important. Certain injuries, namely those to the hamstring or knee, aren’t of much concern, while foot and ankle injuries are a far greater cause for alarm.

Wide receiver is the one fantasy position where Vegas lines don't play as much of a prominent role in lineup decisions, but since they are a huge part of the overall NFL DFS process, I looked at how they affect wide receiver value. It turns out DFS sites may be incorporating Vegas lines into wide receiver salaries more than they should be, leading to some interesting value opportunities: 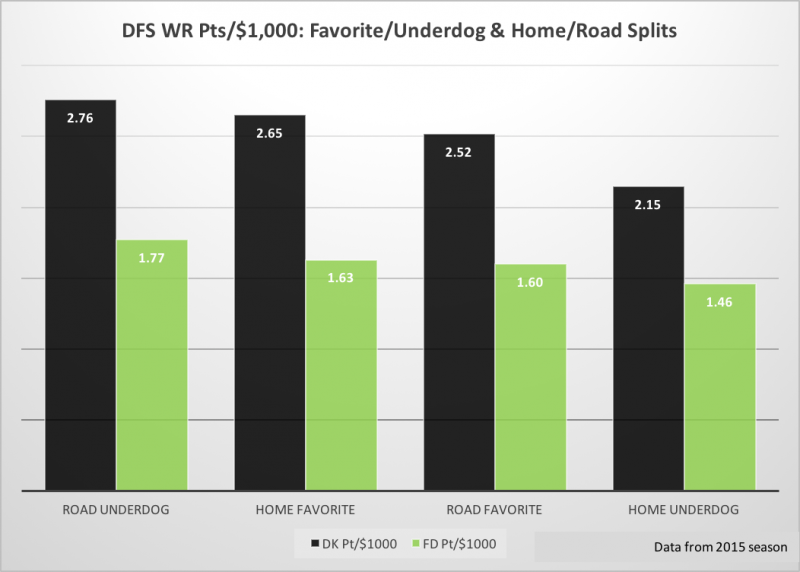 It appears as though road underdog receivers are being undervalued. (We know this because road underdogs actually average the lowest amount of passing yardage and passing touchdowns of the four possible scenarios.)

The sites also may be undervaluing wide receivers on teams with low team totals: 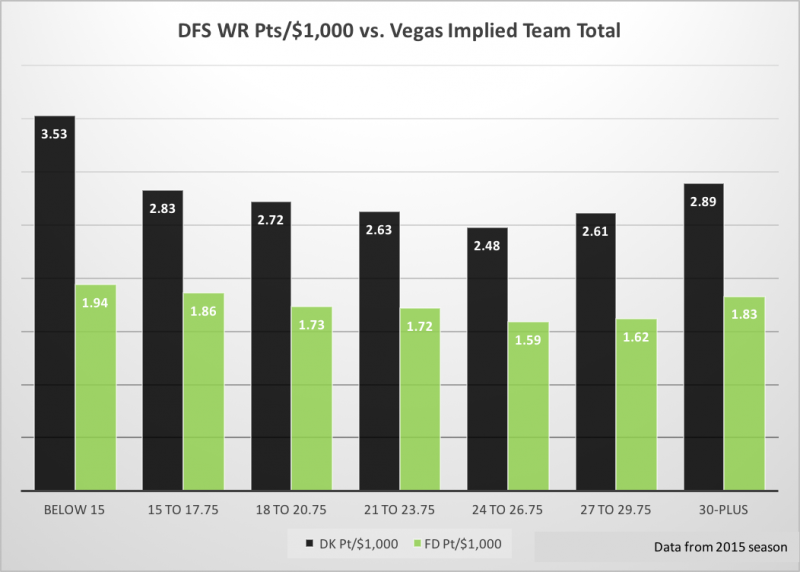 Consider a situation where a quarterback completes three passes for 50 yards on a prevent defense. For a quarterback, that's worth only two extra fantasy points, but for a wide receiver it's worth either 8.0 (full-PPR) or 6.5 (half-PPR).

Keep this in mind when mining for contrarian tournament plays, as wide receivers on teams with low totals tend to be lightly owned. I'll discuss stacking more later, but another implication here is that in games where a team is a big underdog and likely to see garbage time, it might make the most sense to not stack a wide receiver with his quarterback.

How to Select Wide Receivers in Cash Games

You're looking to avoid busts and maximize your floor in cash games, which means relying on wide receivers that are the most likely to give you strong production in the reception and yardage department. Because you can often find high-floor plays at quarterback in the middle pricing tiers, and high-floor plays at running back via inexpensive backups replacing injured starters, it often makes sense to build cash game lineups around at least one stud wide receiver:

As you can see, strategy will differ depending on the site. On FanDuel, the stud wide receivers are clearly the safest plays (a playable wide receiver under $5,000 is rare), but on DraftKings, you can use more of a studs-and-scrubs approach. This is likely due to the fact that the full-PPR scoring system on DraftKings makes it easier for a cheap wide receiver to hit value without scoring a touchdown.

How to Select a GPP-Winning Wide Receiver

It doesn’t get much better than when a player in your DraftKings lineup drops 40 points -- it's only happened 69 times since 2013, or 1.4 times per week. Safe to say you’ll need whoever dropped 40 in your lineup if your aim is to take down a tournament, and wide receivers own 40-point DraftKings games as a position: 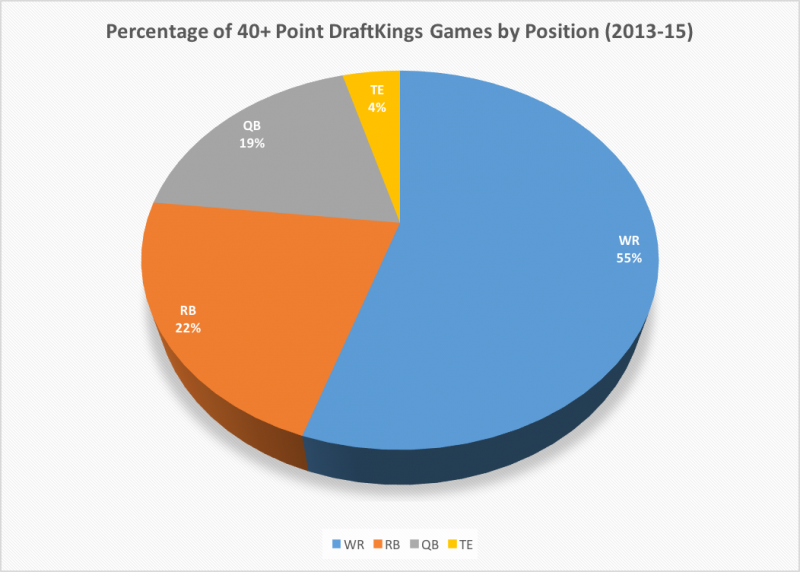 Given that wide receivers have by far the most upside of any position, and that most DFS lineups require more of them than any other positions, nailing your wide receivers is essential to taking down a GPP -- and you should always be trying to take it down, not just minimum cash.

So let's look at what the winners of the DraftKings Millionaire Maker and the FanDuel Sunday Million GPPs in 2015 did at wide receiver. (Note that in the ownership column, the "1" in WR1, etc. refers to the lineup's highest-owned wide receiver, not the ownership of the wide receiver with the highest salary.)

Locking a stud wide receiver in was the foundation of most winning GPP lineups last season. As long as beasts like Antonio Brown, Odell Beckham, and Julio Jones inhabit the earth, it’s a safe bet that in a given week, at least one high-priced WR1 will go off.

Winners were also spending up at WR2 -- they’re paying up at the position with the most upside.

You definitely want to have some contrarian plays in your lineup to take down a GPP, but the median ownership level for the highest owned WR in a winners’ lineup was over 30 percent on DraftKings and over 25 percent on FanDuel. One chalk play at wide receiver generally won’t stop you from winning a GPP. In fact, it probably helps your chances -- many times a guy like Antonio Brown or Odell Beckham will be the obvious play of the week, and fading a guy like that completely can often end up being counterproductive.

As far as stacking goes, the correlation of fantasy points between a WR1 and his QB is the highest of all positional pairings. The correlations of the other wide receivers are roughly one-third weaker, but still among the strongest of any pairings. There is basically no relationship between wide receivers and running backs, which means you don’t need to avoid using a wide receiver and running back from the same team. It’s also worth noting that there’s a slight positive correlation between wide receivers and all members of the opposition's passing game. It’s not something to build lineups around, but if you’re going to have exposure to multiple players on opposing teams in the same games, there’s a slight edge in pairing them up.