Should you be playing more GPPs on FanDuel? Maybe.

In his book, The Success Equation, Michael Mauboussin highlights the paradox of skill -- the idea that as a population’s skill increases in any game or investment universe that results tend to converge and cluster near the mean. As deviations in results get smaller luck becomes a bigger driver of success.

This is something that might be happening on FanDuel as we speak. 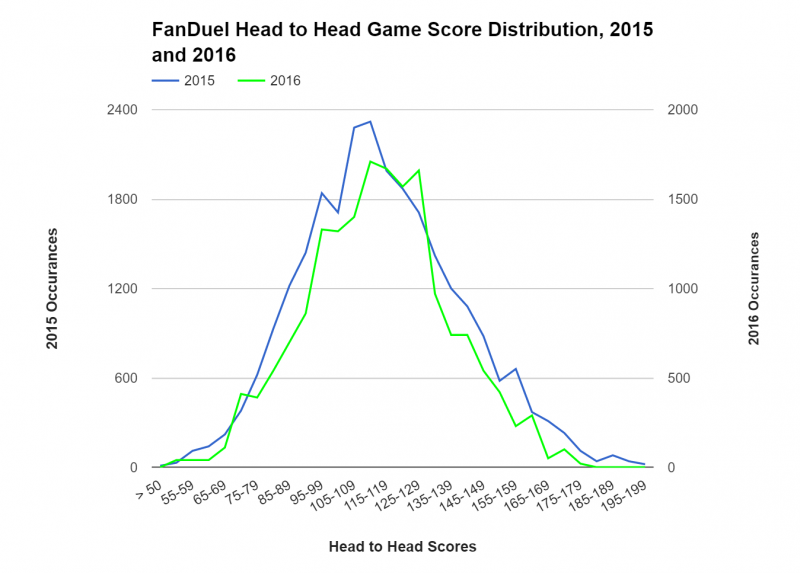 This smaller deviation in scoring is why we see a skinnier distribution graph for 2016 -- the clustering effect that we mentioned earlier. Assuming that your individual skill has remained constant, with fewer low outlier scores, there is a proportionately smaller DFS population for you to beat.

Though the number of trials in an NFL season is a very small sample size, if we do assume that cash games are getting tougher to beat, or are requiring more luck to win, we can combat that by embracing the increased volatility in DFS win rates by playing more games where we benefit from that very volatility, namely GPPs.

I’m not saying run out and play exclusively GPPs -- the NFL season is so short that we might never be able to recognize our true edge. A small shift, from something like 15% of your money in play to 20% in GPPs, may be very reasonable, though.

Aaron Rodgers $9,000 @ TEN - With an over/under at 49 and a spread of just 2.5, this is one of the few games on the main slate with huge shootout potential. Aaron Rodgers leads all quarterbacks in red zone EV over the last six weeks and the Titans have allowed a touchdown rate over 30% to opposing passers in that span.

Matt Ryan $8,600 @ PHI - Philadelphia has allowed a 6.9% touchdown rate to opposing quarterbacks over the last six weeks, the third-worst rate allowed on the main slate. Atlanta is projected to score over 25 points in the only game with an over/under surpassing 50 points.

Tom Brady $8,300 vs SEA - This week may be the lowest owned that you’ll ever get Tom Brady as a 7.5 point favorite with a 28 point team total. Brady leads all passers in touchdown rate this year.

Carson Palmer $7,900 vs SF - Arizona’s 30.75 point implied total is the highest of the week and is eight points over their PPG average. Since Week 4, San Francisco has allowed the highest touchdown rate through the air.

Cam Newton $7,800 vs KC - With a touchdown rate of just 3.1% over the past week, Cam Newton is due for some positive touchdown regression - he led the league in that category last year. Kansas City is one of two teams to allow a 7%+ touchdown rate over the last six weeks and they have allowed the highest red zone touchdown rate through the air in that span.

Marcus Mariota $7,400 vs GB - Only three quarterbacks have scored more points per pass attempt over the last six weeks than Marcus Mariota and Green Bay is allowing a 35% touchdown rate in the red zone during that period.