Last week's Millionaire Maker winner, Hoothead, had every player -- even his defense -- score at least one TD. He had seven players with multiple TDs and 20 TDs in all. He also had five players under 10-percent owned. Check out his lineup below: 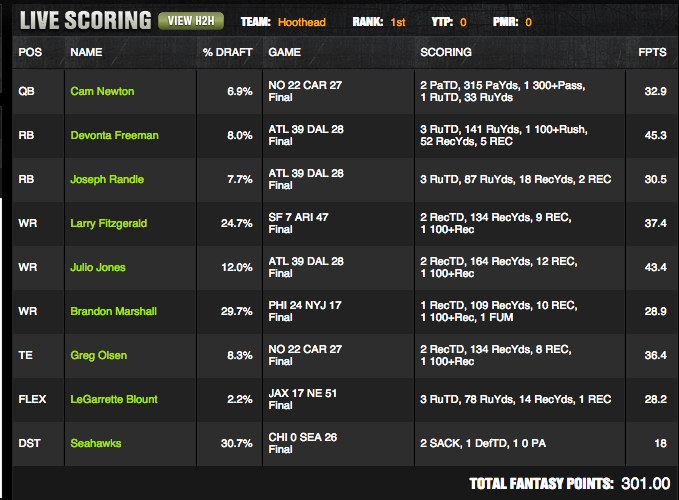 In the space below, I'll focus on players I believe to be strong tournament plays based on multi-touchdown upside and low projected ownership. I won't blurb the chalk plays (Aaron Rodgers, David Carr, Karlos Williams, Latavius Murray, Randall Cobb, Amari Cooper, James Jones, and Greg Olsen) -- they're all justifiable GPP options (especially Williams, whose price and potential workload put him a cut above the rest), but you won't take home big money by stuffing your entire lineup with chalk. Use chalk plays selectively, a few at a time, filling out the rest of your roster with players likely to be low-owned who have that multi-touchdown upside. As usual, I draw heavily from my Ownership Outlook column, and all the players I highlight below are players I believe you should have more exposure to than the field. Since who you fade can be just as important as who you play in a GPP, I've also added a "Fades" section at the end where I briefly highlight any highly-owned players that I believe you should have less exposure to than the field, or no exposure at all to.

Matt Ryan ($6,900) was only the seventh-highest owned QB on Thursday FanDuel slates, but Atlanta has the third-highest Vegas team total (26.5), behind only the Colts (28.5) and Packers (28.25). With Devonta Freeman hogging three scores last week, Ryan has only accounted for half of his team's ten offensive TDs, a figure sure to regress, as the league average ratio for passing-to-rushing TDs is 2:1. Matty Ice is averaging 315 passing yards per contest, so his yardage upside is there. Ryan's price is down $600 from when the season began, and is at its lowest point since Week 15 of last year. Julio Jones's price ($9,300) has rightfully risen by $300 since last week, as he's now averaging over 15 targets and 11 catches per game this season, a trend likely to continue with offensive coordinator Kyle Shanahan moving him around the formation. Overall, the price for a Ryan-Julio stack is only $100 more expensive than it was last week, despite a combined 66.5 points from the pair. Houston's on-paper numbers against the pass are decent, but they've faced three below-average passing teams in the Chiefs, Panthers, and Bucs. Our schedule-adjusted fantasy points allowed (aFPA) ranks Houston 28th against QBs and 23rd against WRs.

After a 35-point outing last week, Andy Dalton's ($5,900) price rose only $200 and he's still priced $200 cheaper than when the season began. At his depressed price, the reward (another big day against a Chiefs defense that has allowed the most fantasy points to QBs and is coming off a short week) outweighs the risk (Justin Houston applies a heavy pass rush and causes Dalton's struggles under pressure to resurface). I can't blame you for playing A.J. Green ($7,600), but I'll be fading him, as he'll be highly-owned and is now more expensive than Randall Cobb ($7,400), who has a better matchup and the best QB in the game. Plus, Green inexplicably averages 36-percent less production at home than on the road in his 62-game career. Instead, I'm looking at the generously-priced Tyler Eifert ($4,600) and Marvin Jones ($3,800), who are both seeing at least 20 percent of the team's red zone targets.

Tyrod Taylor's ($5,800) price started out at $5,000 on both FanDuel and DraftKings, but has now shot up $2,600 on FanDuel but only $800 on DraftKings. I'm getting my exposure to Taylor here. Going up against a Giants defense (30th in TE aFPA) that has good outside cornerbacks but linebackers and safeties that struggle in coverage, highly-paid TE Charles Clay ($3,300) figures to be the focal point of the Bills passing offense. The Giants have allowed the second-most receptions and third-most yardage to TEs. The sidelined Sammy Watkins (calf) and LeSean McCoy (hamstring) have accounted for 25 percent of the Bills passing yardage, so Percy Harvin ($4,600) will also likely be heavily involved. Harvin's matchup is tougher than Clay's, but Harvin was already leading the team in targets, receptions, and receiving yards with Watkins playing. He now becomes the team's number-one WR, as he's been playing more snaps than Robert Woods ($3,100). Harvin makes for a solid play on DraftKings's full-PPR format, where he may see enough volume to crack 100 yards receiving.

I already mentioned that Carr and Cooper are justifiable chalk plays, but I do want to highlight Michael Crabtree ($4,600), who was owned less than one-fifth as much as Cooper on Thursday FanDuel slates. Crabtree is averaging 11 targets per game and hasn't seen less than eight in a game yet. He's also seen four red zone targets, while Cooper has seen none. Both of the Bears outside cornerbacks are struggling, as Alan Ball and Kyle Fuller have combined to allow a 70-percent catch rate, 15.6 yards per reception, and four TDs on only 27 targets this season.

Travis Kelce ($5,300) was owned only a fourth as much as Olsen ($5,400) on Thursday FanDuel slates. Last week, the Bengals allowed Ravens TEs to draw 12 targets and catch eight passes for 103 yards, and the week before they gave up five catches to Ladarius Green. Kelce is averaging 5.3 catches for 81.3 yards and 0.67 TDs this season.

If the Packers passing game does as well as their ownership suggests, you could do well rostering Colin Kaepernick ($5,500) as a contrarian play. Recency bias will keep his ownership extremely low (it was under one percent on Thursday FanDuel slates), but Kaep' has a few things going for him. First of all, his salary has dropped a whopping $1,500 since the season began. Furthermore, he put up 30.5 DraftKings points (335 passing yards, 2 TDs, 51 rushing yards) just two weeks ago in negative game script against the Steelers. In addition, Kaep' has a history of success against Dom Capers' defenses, posting a 101.3 passer rating across three career meetings. Kaepernick's floor is low, but with his rushing ability and the best passing down back (Reggie Bush) and best deep threat (Torrey Smith) he's ever had, Kaepernick has huge upside in the game with this week's highest Vegas over/under total.

Matt Forte $7,100 vs. OAK - Forte's price has dropped $700 since the season began and hasn't been lower since pre-2014 -- it got as high as $10,100 last year. Although Jimmy Clausen limits the Bears' offense, Forte has tremendous upside based on volume. Last week, Forte's number was called on 47 percent of the Bears' offensive plays -- but they only ran 50 plays. The Raiders are allowing opponents to run 69 plays per game, giving Forte legitimate 30-touch upside.

Devonta Freeman $5,200 vs. HOU - I was interested to see the split between Joseph Randle's ($5,500) and Freeman's ownership on Thursday FanDuel slates, and the field went with Randle (13.6%) over Freeman (6.7%). Freeman is by far the superior play as a large (-6.5) home favorite this week who ripped off five-yard gains on nearly half (14 of 30) of his carries en route to 141 rushing yards against a previously-stout Dallas defense last week. Randle, on the other hand, is a road underdog this week who took advantage of defensive lapses last week for gains of 37, 28, and 20, while other his other 11 carries tallied a laughable two yards. Also, Freeman is averaging four receptions per game, compared to Randle's two. I'll be playing Freeman and fading Randle this week.

Melvin Gordon $4,900 vs. CLE - Despite Cleveland's 32nd-ranked run defense, I was initially bearish on Gordon's outlook based on the fact that he's seen zero red zone looks compared to Danny Woodhead's nine. Upon further review of the circumstances, I've come around. When the Chargers are leading, tied, or trailing by one score (seven points) or less, Gordon has seen 65 percent of the team's backfield opportunities (carries plus targets). When the Chargers are down by more than one score, Gordon has seen only 34 percent of the team's backfield opportunities. Well, the Chargers' have been down by an average of 7.1 points every time they've taken a snap this season, third-worst in the league. That will likely change this Sunday, as San Diego is a 7.5-point favorite at home against the Browns. With three-fifths of the Chargers' offensive line banged up and struggling in pass protection, I'd expect San Diego to heavily emphasize the running game against a Browns defense that has permitted the most rushing yards per game (158.3), second-most yards-per-carry (4.9) and missed over nine tackles per game. The lack of red zone work is a concern, but a 9-0 split in favor of Woodhead is likely to regress as the season wears on, and I like the odds of that beginning this week.

Seahawks $3,700 @ DET - Detroit is ailed by poor offensive line play, a banged-up QB, and no running game, which is why Vegas has installed them with a measly 16.5-point team total. An added bonus of rostering the Seattle is returner Tyler Lockett, who has taken two kicks to the house in his three-game pro career.

Chargers $2,800 vs. CLE - San Diego checks all the boxes this week. They'll barely be owned (2.3 percent on Thursday FanDuel slates), are large home favorites (-7.5), and face a QB in Josh McCown who owns poor career marks in completion rate (58.7), interception rate (3.5), and sack rate (8.2) -- all of which correlate to defensive fantasy production.

I already mentioned I'm fading Joseph Randle completely. In addition Martellus Bennett is another guy who I'll own little, if any, of -- the aforementioned Clay is $1,200 cheaper with a comparable matchup, higher Vegas total, and better QB. I already discussed why I'm fading A.J. Green, and Larry Fitzgerald is another guy I'm going to lay off, as he's nearly the same price as Cooper but facing a tougher defense.