What is the Value of a Bench Player in Fantasy Football? Part II

The value-based drafting (VBD) strategy focuses on drafting the starting players that will deliver the most points over the season. In order to win the championship, though, we also need to fill out our roster with high quality bench players that can step in when our starters are unavailable or have bad matchups. Since VBD becomes less useful as the starting spots fill up, we need additional strategies to help us through the remainder of the draft.

The first step in developing such a strategy is estimating the value of potential bench players. This will help us to determine at which positions the backup players are most valuable and even to determine whether we might want to draft some backups before all starting spots are filled.

In our first installment, we looked at the value of the first backup at each position and saw how those compared to the value of the players in starting spots. In this article we will dive deeper, looking at all the backup spots to see how much value they are likely to add to our team.

As in our first installment, we can determine the average value backups add to our team using Monte Carlo simulations. Since we don't know the exact number of points that any particular player will score any week, we instead randomly choose a number of points that would be typical for a player at that position and draft rank over recent seasons. With their points in hand, we can see exactly how many more points we would get by having the backup compared to what we would get without them. By repeating this a large number of times, we can get a good estimate of the average value added by each backup.

Rather than looking at the value of the specific players available at this moment in the later rounds of drafts, we will instead look at the average value available in later rounds at each of the positions over recent seasons. (See here for an example of what this looks like at the RB position.) This should allow us to learn some lessons that do not go out the window with changing ADPs.

Each value is listed as a percentage of the points that player would contribute as a starter. For example, if we take the 20th QB off the board, we might expect them to score 14.3 points per game as a starter. However, as the first backup, we only get 23.6% of that value, 3.4 points per game more than we would score without them.

In each case, we only get a fraction of that player's points added to our score. This happens for two reasons. First, in many cases, the backup players end up on our bench instead of in a starter spot. In those cases, their points do not count toward our score. Second, even if they end up in a starter spot, the value they add to our score is just the amount that they outscore the starter who drops to the bench. For example, if the first backup outscores a starter by 0.1 points, then they've only added 0.1 points beyond what we would have had without them. For those reasons, the value added by backups is only a fraction (usually a small fraction) of the points they score.

The next two tables show the value of backup RBs and WRs. Here, we consider as many as 3 backups at each position.

As we saw before (with the first backup at each position), the more starting spots available at a given position, the more valuable the backups are. This is mostly due to the fact that there are more potential injuries that can occur to put a backup player into a starter spot. For example, if each starter has a 90% chance of playing any week, the odds that that all three starters play is only 73% (since that is 0.93). Each time we add another starting spot, it becomes more likely it is that the backup will play due to an injury of a starter.

Comparing the value added at different positions, we can see that backup RBs have slightly more value than backups at the other positions. This is perhaps surprising since WRs have more week-to-week variation than RBs, making it more likely a backup WR could outscore a WR in a starting spot when he has an especially good week. On the other hand, RBs are more likely to get injured, which gives backup RBs more chance to contribute. The simulation results show that the difference in injury rates outweights the difference in week-to-week variation, making backup RBs slightly more valuable.

We can also see that backup TEs have slightly more value than backup QBs. As in the case of RBs versus WRs, TEs are injured a bit more than QBs, which helps make up for the fact that they have less week-to-week variation. However, in this case, the extra value of backup TEs probably has more to do with the fact that there is a smaller dropoff in average points between the typical TE #1 and TE #2 than between the typical QB #1 and QB #2. So even though the backup TE has less week-to-week variation, it takes less of an upswing to outscore the TE #1 than it does for the backup QB to outscore the QB #1.

Putting The Pieces Together

Since none of the backups are worth more than 61% of their value as starters, no backup at any position is worth more than a starter in this league setup. At the other end of the spectrum, the second backup QB or TE and the third backup RB or WR are all worth about 1.5 points per game, each adding fairly minimal value to our team. So we will focus on the first backup at QB and TE and the first two backups at RB and WR.

The following chart shows the value of each of those backups at the ranks where they would usually be taken in the draft. 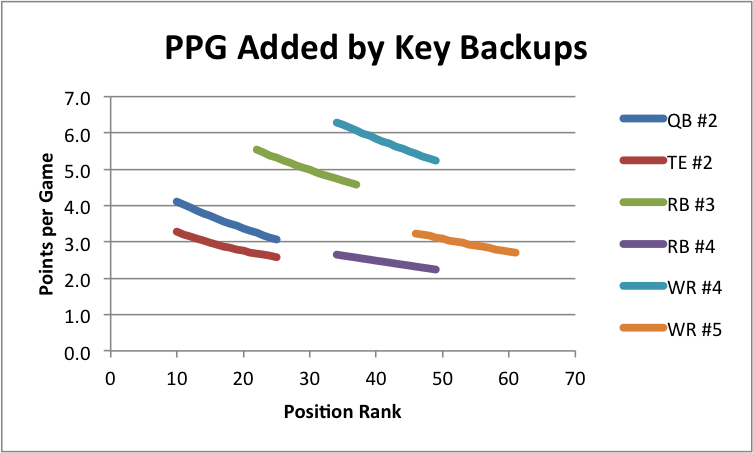 We can see that the first backup RB and WR are noticeably more valuable than the other backups. Furthermore, once a backup RB and WR has been taken, the backups at all positions (at least in this league setup) have fairly similar value. So once the most valuable backup spots are filled, we may want to switch to other strategies such as grabbing potential breakout players.

Other league setups will have slightly different results. You can use the percentages in the tables above along with 4for4 projections to determine the value of any player as backups on your roster. Knowing the potential value of any player to your team will hopefully be a useful guide on draft day.