What is the Value of a Bench Player in Fantasy Football?

The value-based drafting (VBD) strategy focuses on drafting the starting players who will deliver the most points over course of the season. In order to win the championship, though, we also need to fill out our roster with high quality bench players that can step in when our starters are unavailable or have bad matchups. Since VBD becomes less useful as the starting spots fill up, we need additional strategies to help us through the remainder of the draft.

The first step in developing such a strategy is estimating the value of potential bench players. This will help us to determine at which positions the backup players are most valuable and even to determine whether we might want to draft some backups before all starting spots are filled. In this article, we will provide such estimates and consider the implications for draft strategy.

Rather than looking at the value of the specific players available at this moment in the later rounds of drafts, we will instead look at the average value available in later rounds over recent years at each of the positions. (See here for an example of what this looks like at the RB position.) This should allow us to learn some lessons that do not go out the window with changing ADPs.

For simplicity, in this article, we will focus on leagues using a PPR best-ball format, where the best starting players are chosen automatically after all their scores are known. This format is used in draft-only leagues such as the popular MFL10 contests and the Scott Fish Bowl Draftmasters. For non-best-ball leagues, we can view the results below as a best-case estimate of the value of bench players, with their actual value being somewhat less than given here (because no one can set a perfect lineup each week).

The Value of a Backup QB

Let's start with a concrete example. Suppose we drafted the 6th QB off the board (at this moment, Ben Roethlisburger). The following chart shows the value of the remaining QBs given that they will be on a team that already has QB #6. 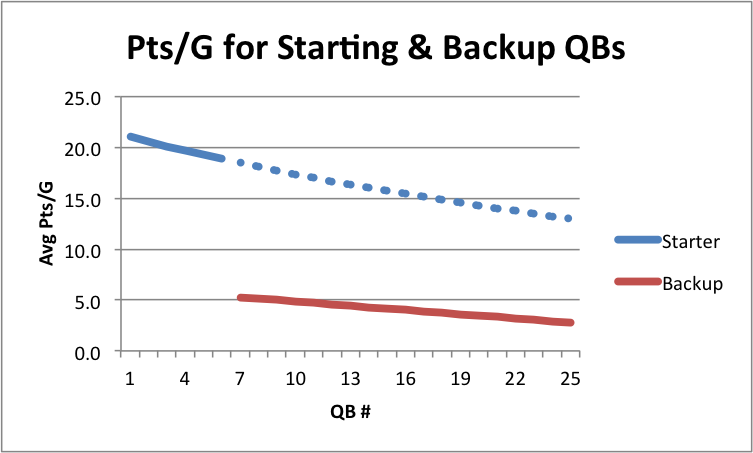 In the chart, the blue curve shows the average points per game produced by each successive QB taken in the draft. If that QB is our starter, then we can expect to add the points shown in blue to our total. However, if that QB is our backup, then he will only add to our point total if our starter either produces less points than the backup or does not play at all. The red curve shows the average points per game added to our point total by taking that same QB as a backup instead of a starter.

Even though it is important to have a backup QB (at the very least for when our starting QB has a bye week), the chart shows that backup QBs provide very few extra points per game, less than 1/3rd of the points the same QB would provide as a starter. Furthermore, the red curve is even less steep than the blue one (which is already less steep that the corresponding curve for RBs and WRs), so there is very little reason for us not to wait on drafting a backup QB.

The data shown in the chart above was produced by Monte Carlo simulation. Since we don't know the exact number of points that any particular QB will score any week, we instead randomly choose a number of points that would be typical for these QBs over recent seasons. With their points in hand, we can see exactly how many more points we would get by having the backup QB compared to what we would get with just the starter. By repeating this a large number of times (one million times per data point in the chart above), we can get a good estimate of the average value added by this backup QB.

Such simulations can tell us the value of each potential backup player once we know who is starting in front of them. For example, the red curve in the chart above shows the value of each QB as a backup to QB #6. However, to make this information more useful, we need rules of thumb that will work more generally — not one rule for the backup for QB #1, another for QB #2, and so on.

For QB #6, we saw in the chart that all the later QBs, as backups, were worth less than 1/3rd as many points than as starters. In fact, this is true in general for backup QBs. The best estimate of this kind is that a QB is worth, as a backup, about 24% as much as when starting. This estimate is usually within about 0.7 points per game of the actual value found by Monte Carlo simulation.

Similar rules of thumb work for other positions. The following table shows what fraction of the starter points we can expect to get from a backup, when the given the number of starting spots are available at that position. The last column gives the typical error in these estimates.

From the table, we can see a couple of trends. First, we can see that backup running backs are usually the most valuable, followed closely by backup wide receivers. Both quarterbacks and tight ends are much less valuable (unless we are starting two quarterbacks). Part of this is due to the fact that we start more running backs and wide receivers, as we will discuss next, but this is also partly due to the fact that quarterbacks and tight ends are more consistent week to week, which lowers the odds that a backup will be able to outscore a starter at those positions.

Second, we can see that the backup becomes more valuable when there are more starting spots available. This is due to the fact that, with more starting players, there are more chances for a player drafted earlier to have a poor game or to miss a game entirely due to injury.

Next, we consider how these estimates change when our roster contains a flex position, where we can start either a RB or WR. The following table shows the estimates for the value of the backup RB and WR for two common league settings (2RB/2WR/1Flex and 2RB/3WR / 1 Flex). Each row shows the value of the first backup at a particular position (RB or WR) depending on the position of our starter in the flex spot. For example, in a 2 RB / 2 WR / 1 Flex league, if we have drafted 2 RBs and 3 WRs, then the 3rd WR is the starter in the flex position.

We can see from the table, whichever position is drafted for the flex position, a backup at the other position is worth a larger percentage of its value as a starter. If we draft a WR as our top flex option, then the backup RB is worth more than usual, and if we have a RB in the flex position, then the backup WR is worth more than usual.

As we saw above, the first backup retains more of its value when there are a larger number of starters in front of it (since there are more starters that could be injured, have byes etc.). If a WR is starting in our flex position, then not only is the backup RB worth more, as we just discussed, but the backup WR is also worth more since it is the backup behind 3 starters instead of two. So we can see that, when a flex position is added, all the backups that can supply that position are worth more than usual.

Comparing the Backups Across Positions

Now that we have a way to estimate values for backups at each of these positions, we can see how the estimated values compare to one another in common league setups.

The following chart shows the values of the players typically available as backups at each of these positions in a league we start 1 QB, 2 RBs, 3 WRs, and 1 TE. Here, we are assuming that 12 QBs, 24 RBs, 36 WRs, and 12 TEs have already been taken and the chart shows the points that will be added to our team for the players still available, who will be backups on our team. 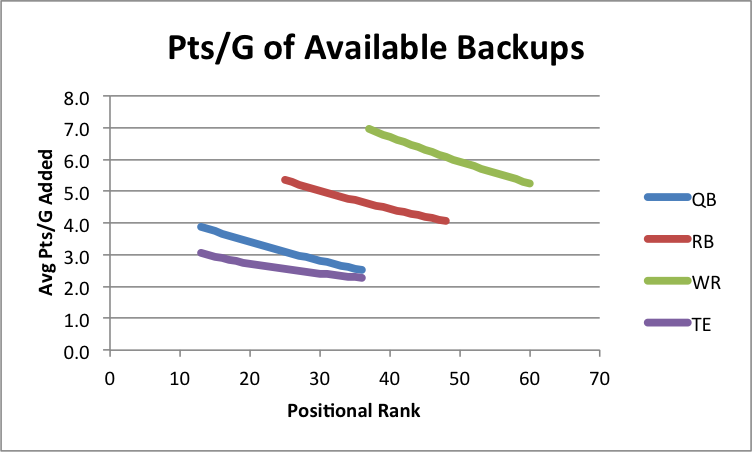 We can see that our backup WR is by far the most valuable, followed by RB, and then QB and TE. The slopes of the positions are all fairly similar, with the possible exception of TE. Following the logic of VBD, we would want to consider waiting at TE, given its small slope; however, TE is already the least valuable, so simply drafting to get the most points would already suggest that we draft a backup TE last.

Here is the corresponding chart for a league we start 1 QB, 2 RBs, 2 WRs, and 1 TE but also have 1 flex position, where we can start a RB or WR. We are assuming that the flex position has been evenly drafted by the other teams (6 RBs and 6 WRs) and that the starter in our own flex position is a WR. 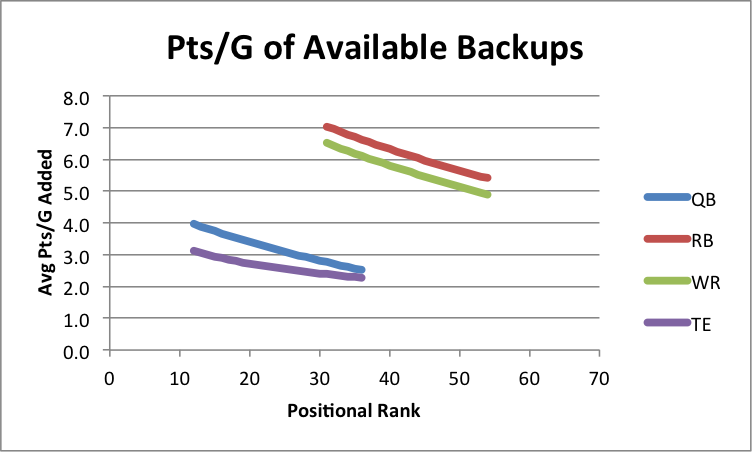 Now we can see that RB becomes the most valuable backup position for our team. This is despite the fact that RBs in these ranks typically score fewer points than WRs of the same ranks! This extra value comes from the fact that our flex position is filled with a WR, which means that an injury at either RB or WR will allow the backup RB to become a starter. If our starter in the flex spot was a RB, then our backup WR would be the most valuable.

Finally, we consider one uncommon league setup: those containing a "super-flex" position, which can contain not only a RB, WR, and TE but also another QB. As we saw above, the backup QB behind 2 starters is worth only 38% of its usual value. However, that assumes that an injured QB can only be replaced by a backup QB. With a super-flex position, an injured QB can be replaced by a RB, WR, or TE just as well. As a result, the added value of a 3rd QB is substantially reduced, probably to less than 20% of its usual value, which makes drafting a 3rd QB by no means a necessity.

This last point is part of the beauty of the super-flex position. Like a 2-QB league, it elevates in fantasy football the most important position in real football. However, it is impossible in a 12 team league for all teams to draft 2 starting QBs and 1 backup that are actually starters in real football. On the other hand, with a super-flex position, only 24 starting QBs are really needed since the backup QBs, as we just saw, have fairly little value.

From these results, we can draw some useful lessons for formulating our draft strategies: