We're just a few weeks away from the fantasy playoffs, and we'll need to know everything about our matchups. Opportunity and project game script are critical, but this time of year breeds the worst weather conditions. We've been spoiled with optimal game environments so far, but there are a few games to monitor over the weekend. I'm only worried about Buffalo (Orchard Park), but I'll have updates as the weekend progresses.

No recap for last week. All of the Thanksgiving games were indoors, and the rest were clear. Next week, I’ll definitely be reviewing the BUF/NE, but let’s get into the games for Week 13.

BLUF: NE/BUF and ARI/CHI are the only games that concern me. Both will have a mix of precip and wind, affecting the game to some degree. NE/BUF carries more risk with the faster wind speed and (light) snow in the forecast. Josh Allen’s rushing will buoy his production, but we should avoid the secondary and tertiary pieces of the game.

12/5 Update: We've got some favorable changes from Thursday's forecast.

The core pieces to NE/BUF are still in play and my notes on Allen in wind games are below. I'll monitor field conditions in Chicago, but we can approach that game as normal. Same with either rain game.

12/6 Update: Yes, I've seen the pre-game videos (even re-tweeted one myself because it looked cool). No, it doesn't change my expectations for the game. I'm already expecting a slight drop in pass rate and plays run given the matchup. Allen, Diggs, and Beasley (i.e., the core plays for the Bills) are still good options given their baseline target shares. I'd add Knox to that list as well given his general usage and red-zone targets. Allen has the best chance of maintaining his average output with his rushing as he's done in the past.

For the Patriots, I saw a report about the Bills putting one of the LBs on the reserve/COVID-19 list earlier today. Their bottom-5 PROE coupled with this news gives more credence to the idea they'll lean into the run game. It short-circuits the Bills' gameplan should their intent on passing hold steady and plays to the Patriots' strength. It's a fool's errand to try and guess what Belichick will do, but makes the most sense given how they've operated to date.

Games Impacted by Wind and Rain

I’m going to focus on the Bills’ passing game for two reasons. First, we have more samples of Josh Allen playing in poor conditions. Not a lot, but still. Second, the Bills are second in pass rate over expectation. New England is 29th. The weather is much more likely to affect Buffalo’s playcalling, but let’s start with the matchup itself.

The Patriots are already a tough matchup for Allen. He scored 12.5 fantasy points in their first meeting last season. I’m using just this game as a proxy since the offense (and Allen himself) was demonstrably different in 2020 than the previous two seasons. And, by Week 16, the Patriots were waving the white flag on the season (multiple starters injured, Jarrett Stidham played the second half). Allen salvaged his day as a runner (10-23-1), but the passing game suffered outside Stefon Diggs. So, with the context of the matchup taken into account, let’s look at the weather. 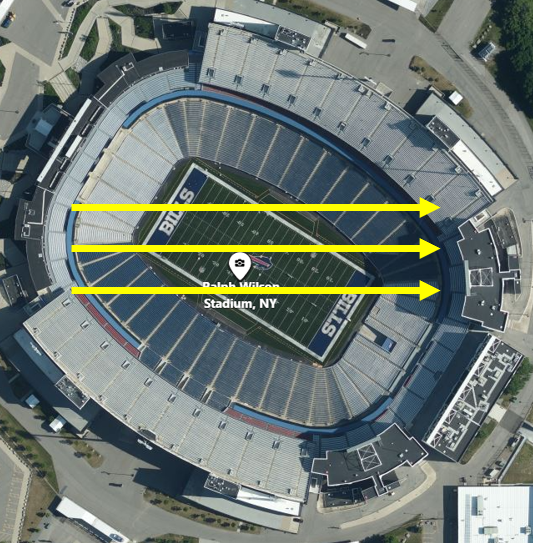 I’d prioritize the wind speed over its direction. Winds from the west could cause a slight crosswind, but the 20-plus mph velocity worries me more. Highmark Stadium is one of the shortest stadiums in the league (110 ft.) and doesn’t provide much of a natural barrier. Allen’s done well in similar conditions earlier in the season, but the rain/snow adds another layer to the game.

I’ve got one game where Allen played in high winds and rain: Week 8 of 2019 at Philadelphia.

You can wave this away with two valid points: a one-game sample and the change in offense. Allen was throwing to John Brown and Tyler Kroft, and he was yet to work on his mechanics. However, we should consider his trends against New England *and* any shifts in team intent due to the elements for Monday night. Allen’s rushing (45 yards in lousy weather, 30.7 YPG against New England) will keep him afloat, but I’d avoid any of the ancillary pieces to the Bills’ offense.

It’ll be cold in Chicago (low 40s), but not enough for snow. A precip rate of 0.04 inches per hour hasn’t historically changed a team’s intent (e.g., reduced passing rates, shorter attempts, etc.). However, it can lead to what I call “chaotic events” like fumbles or tipped passes for interceptions. Jared Goff fumbling in the rain back in Week 2 would be an example. Andy Dalton did it twice in similar conditions during the 2019 season. They’re nothing we can predict but can flip the game instantly. The rainfall rate won’t degrade the field, so that that footing won’t be an issue either. Let’s get to the wind. 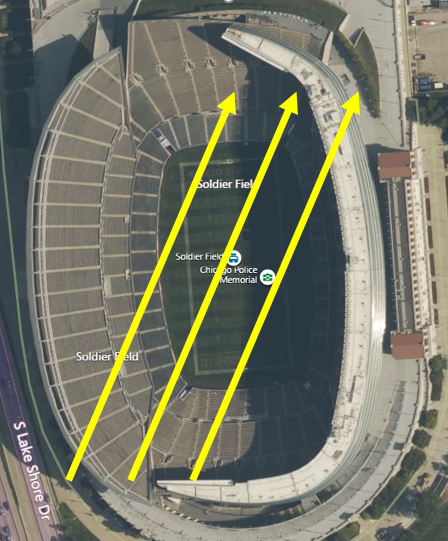 The general threshold is 15 mph, but I’m never worried about wind speeds at or even slightly above. Plus, since the direction is somewhat in-line with the stadium’s azimuth, there’s less chance of it causing an issue. Unless the wind picks up, the only concern (which is minor) will be the rain.

Luckily, both games have the same storm pattern in their forecast as of today. There’ll be light rain throughout the first half (0.01 inches per hour), with a slight increase in the precip rate late in the game (0.02 inches per hour). Neither rate should have an impact on the game.

The temperature in Cincinnati will be in the 50s, and their stadium has heated pipes to keep the rubber inlays of the turf warm. So, there’s less concern for a wintry mix like what we saw in Chicago or Pittsburgh earlier. Seattle’s game already projects as slow-paced, and the favorite (San Francisco) is 30th in PROE. Any shifts in team intent would favor the run, but it’s inherent to the 49ers’ offense. Without any change in team intent, we shouldn’t have any concerns.