4 Fantasy Football Trends to Apply to 2020

The game of football is ever-evolving and as the NFL changes, so should one’s approach to fantasy football. Most of the offseason is spent analyzing specific teams and players but it’s important to evaluate the landscape of the game on a macro level. Discovering patterns for aspects such as play-calling and which positions are benefiting or suffering can help build a foundation upon which fake footballers can think about the game on the player level. The following will examine league-wide tendencies from the 2019 season and compare those trends to past years in hopes of teasing out lessons that can be applied to 2020.

It’s no secret that passing has been on the rise in the NFL but there’s a chance we may have seen the peak in league-wide passing rates a few years ago, at least for the foreseeable future. 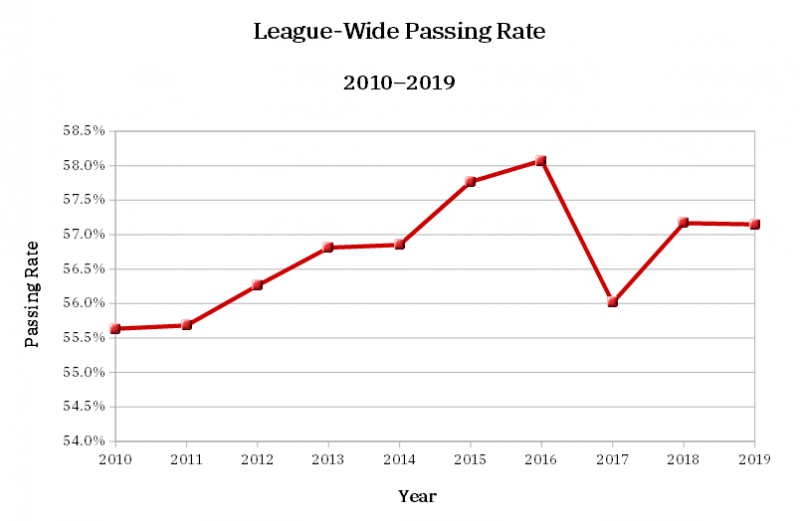 The recent dip and subsequent plateau in passing rates hasn’t necessarily translated to a fall in quarterback production. While the league is still passing more than we saw even five years ago, teams are trending towards mobile passers now more than ever. 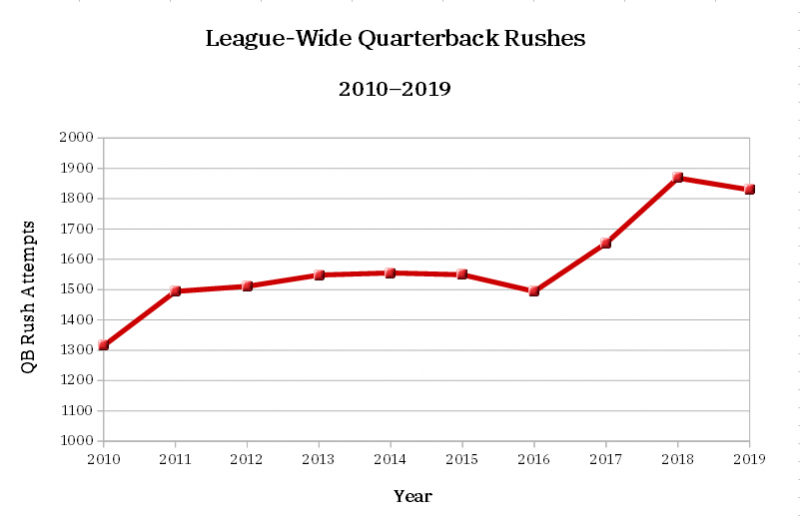 Even if we remove Lamar Jackson from the equation, 2019 still would have tied for the second-most rush attempts from the quarterback position since 2002 (data only pictured to 2010). This recent phenomenon has completely altered the fantasy landscape, especially at the top of the quarterback ranks. Last season, the top six fantasy quarterbacks averaged over 92 rush attempts on the season and none had fewer than 52 attempts—from 2010–2018, the average rushes for top-six fantasy quarterbacks were 53, or last year’s floor.

If quarterbacks continue to pull it down to run at a high rate, the proverbial fantasy pie shrinks for the other positions. To see how the skill positions have fared in recent years, we should consider league-wide target and touch shares.

It stands to reason that as passing rates have increased in recent years, running back usage would decline. Although that has been the general trend, running back touch rates have spiked in two of the last three seasons. 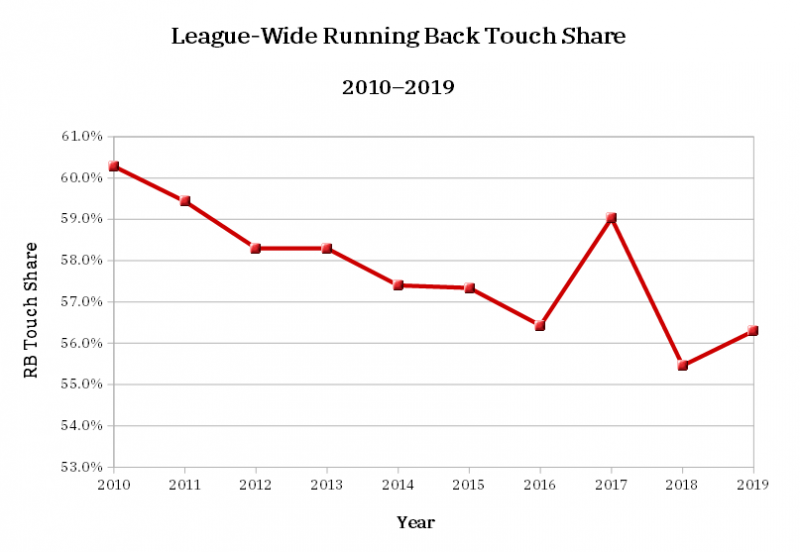 The bump in 2017 can be explained by an uncharacteristically low passing rate across the league but running back usage has seen a general increase in the passing game recently. 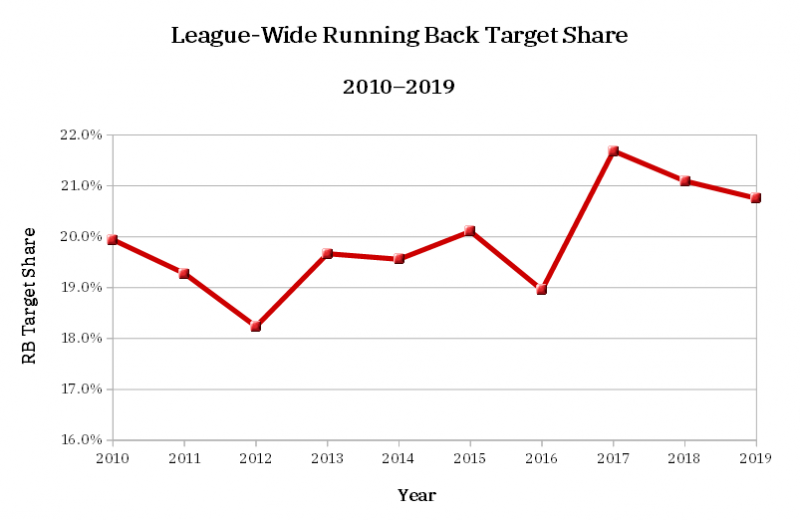 Tight end target share has been relatively consistent across the league while the wide receiver position, as a whole, has seen a slight dip in recent years. 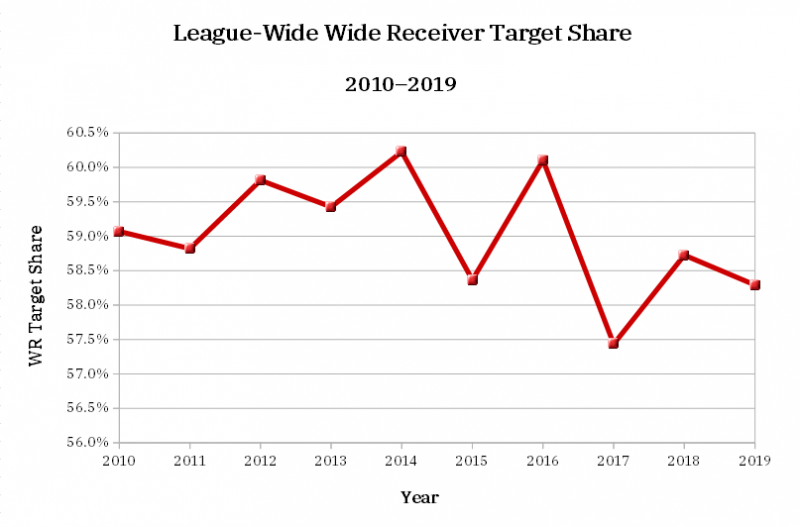 Target distributions across the league can be attributed directly to the top players at each position.

The most obvious trend in recent years has been the emergence of the elite tight end. After the top five or six tight ends, the position has been a fantasy wasteland but the top players have been so dominant that they have buoyed the position as a whole. From 2010–2014, the 2013 season was the only year where more than one tight end saw a target share of at least 22%. Over the past five seasons, multiple tight ends have exceeded the 22% target share mark every year with three such tight ends in three of those seasons and five in 2019. Meanwhile, the mid-tier tight end is disappearing. From 2010–2017, at least 13 tight ends exceeded a 15% target share every year. In 2018, there were only eight such tight ends and last year the five tight ends to reach a 22% share were the only ones that exceeded 15%.

A similar phenomenon has taken place at running back. From 2010–2016, an average of three running backs per season hit the 15% target share mark. Over the last three seasons, at least seven backs have hit that mark every year. Of the seven running backs to reach 20% of team targets in the last 10 years, six have come in the last three seasons. Christian McCaffrey is the only back over the last 10 years to hit 22% target share and he’s surpassed that mark every year that he’s been in the league.

As elite tight ends and pass-catching running backs become more prominent, the alpha wide receiver is becoming a rarity. In the six seasons from 2010–2015, roughly three receivers every year saw at least 30% of his team’s targets. In each of the last four seasons, just one receiver each year has hit that mark. The number of receivers to hit 25% and 20% target share has remained relatively stable, suggesting that WR2s and WR3s are closing the production gap on WR1s.

This is shown by the relatively flat scoring curve that we saw at the position in 2019. 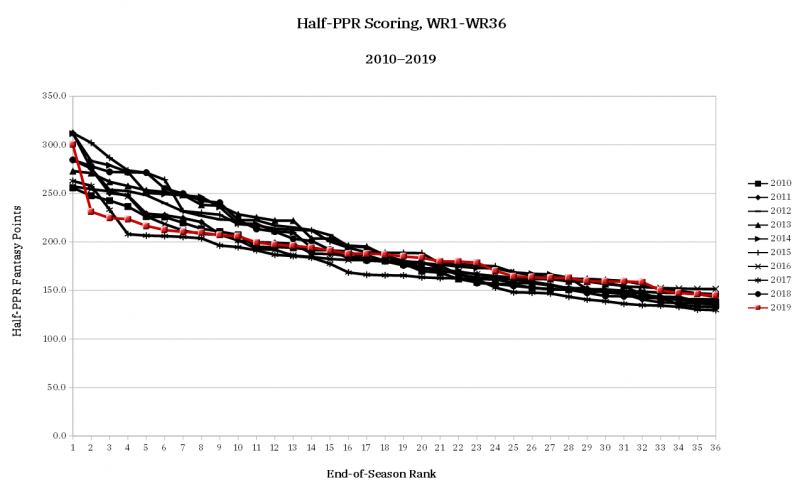 Other than Michael Thomas’s record-setting season in 2019, we saw some of the lowest scores in the last 10 years for top-12 fantasy receivers. The WR2 and WR13 were separated by just 35.2 half-PPR points. From 2010–2018 the average gap between the two was 68.8 points. The above graph shows some of the highest scores for the WR18–WR36 that we’ve seen in a decade.

As the NFL continues to evolve into a pass-first league, the fantasy landscape changes as well but the emerging trends are not as intuitive as one might think.

Strategy
How to Play Fantasy Football

Strategy
Do Players Perform Better in Fantasy in a Contract Year?

Strategy
Playing for Keeps: Keys to Running a Keeper League