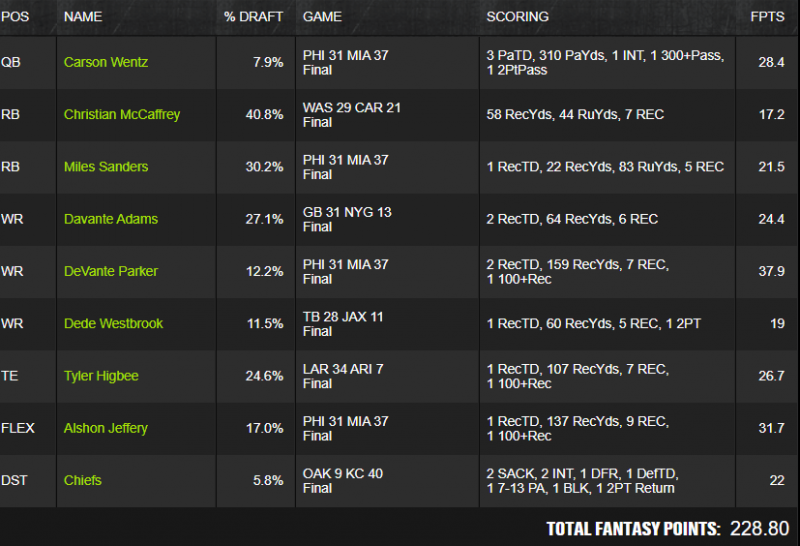 The chalk hit hard in Week 13 with the winning lineup carrying an average ownership of 19.7%, by far the highest we've seen this season. The players in this lineup were so popular that the first-place prize was split between two players. The only players owned in fewer than 10% of lineups were quarterback and defense, positions where anything over 5% ownership is somewhat high. Maybe the most interesting thing about this lineup was the fact it had no players from the Chiefs—the team with the highest implied point total—except for their defense. This was possibly a reaction to Sunday morning weather reports that predicted high winds, which often has a negative impact on the passing game and, ultimately, fantasy production. In almost any other scenario, rostering a $10,500 player who only produces 17.2 points is going to kill any chances of taking down a GPP but with ownership above 40%, Christian McCaffrey’s average day was not a death blow. Considering McCaffrey’s ownership should be considered when deciding whether to pay up for him, not because you might want to fade him, but because you might be okay with an average performance if his ownership remains this high even in the largest contests. 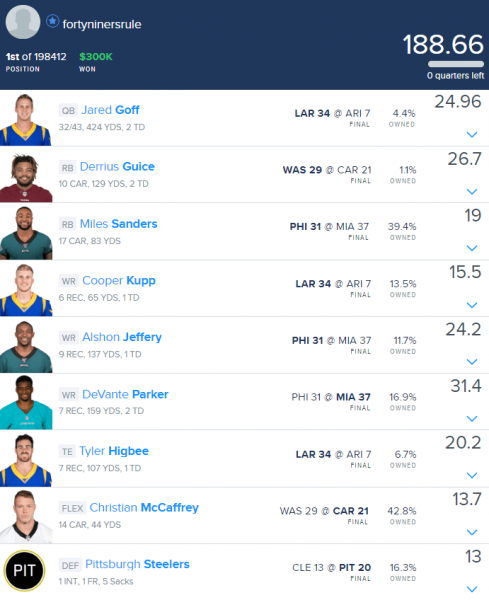 Again, this was a fairly chalky lineup with an average ownership of 17%, the third-highest from a Sunday Million winner this season. It wasn’t a huge surprise that Jared Goff carried a sub-5% ownership despite the great matchup given his struggles in the previous three games. What is noteworthy is how price-sensitive the crowd was to Tyler Higbee, who was expected to see an increased workload with Gerald Everett against the worst tight end defense in the league. As a free square on DraftKings, Higbee was in nearly a quarter of Millionaire lineups but his TE9 price tag on FanDuel was too high for 97% of the field. If similar situations arise moving forward, that could be a trend to look to exploit.

Landing on Derrius Guice as a 10-point underdog would have been a tough sell to anyone going into the week but there may have been some merit to predicting a big day regardless of game flow. One of the most overlooked injuries of the week was the loss of Dontari Poe, one of the best run-stoppers in the league. I mentioned it in a breakdown but failed to account for the possibility of a big game from Guice.

The concern here gets into sports science and playing at high temperatures. Research highlights the risk of heat cramps, heat exhaustion and heat stroke due to the body’s inability to maintain its core temperature. Muscle cramps from loss of sodium via sweating are possible requiring frequent hydration. If these temperatures hold throughout the game, don’t be surprised to see players frequently pulled to rest, stretch and maintain proper fluid levels throughout the game. Using game totals since 2003, we can see how this has impacted games.

We saw this in Week 1 as Mike Evans' illness combined with the heat exacerbated the symptoms. In Week 2, New England was spotted using makeshift tents to combat the Florida heat.

It’s not that rain will be present, but how much rain. From a historical perspective:

Also, defining how much rain (precipitation rate) is equally important.

Light rain has lead to unpredictable events occurring on the field. Examples include:

Historical trends have shown that wind speeds over 15 MPH cause the greatest impact on passing volume.

On top of that, concern over wind has two components: speed and direction. Stadium design also plays a role. The relative heights have been able to mute most of the effects as seen in Cleveland in Week 10 where the wind speed was 20 MPH. That, however, didn’t happen in New England as their open section towards the back of the stadium has caused issues on the field as seen in Week 6.

There's not really a huge impact, but it has been shown to cap passing games. 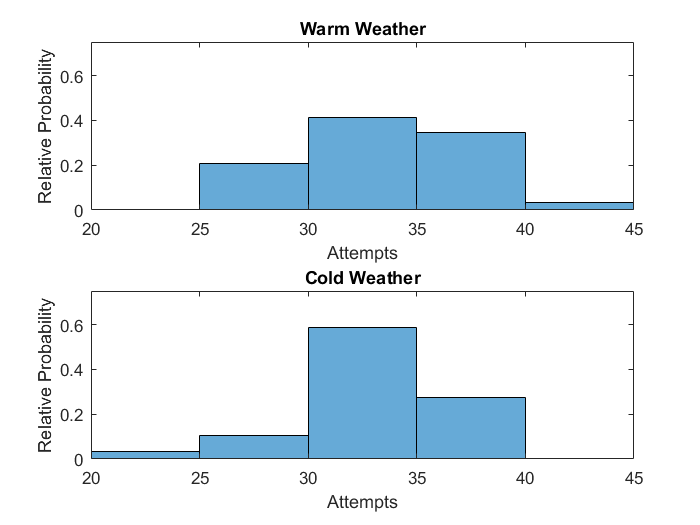 For DFS purposes, I see two especially actionable pieces of information—we will ignore the impact of high temperatures for now.

Light rain might produce a greater opportunity to capitalize from a fantasy perspective than heavy rain. My hypothesis here is that teams are still going to try to run out their game plan when it isn’t pouring, which is why we see the unpredictable events compared to heavy rain where teams seemingly run more and scores are lower. In those light, but consistent rain games, we might find some under-the-radar fantasy defenses.

Wind is the enemy of fantasy and we usually get an indication from Vegas. Maybe the best way to capitalize on these situations is to fade potent offenses while hard-nosed set-it-and-forget-it types hold onto the hope that their favorite high-powered offense can out-throw the elements. The Kansas City game was the most obvious example in Week 13.

Keep these factors in mind over the final month of the season.

Player Profiles
Anthony Schwartz is a Low-Risk Fantasy Flier as a Rookie
by Joe Redemann · Jun 24, 2021