The process, the process, the process, as the kids say. While week-to-week kicker selection hinges largely on Vegas lines and home field—we want home kickers on teams favored by Vegas—picking a kicker for the long haul requires a more zoomed out process. We want kickers on good offenses that will often be in position to keep trying field goals into the second half, sure, but we should also note the kickers who were incredibly unlucky the previous season.

Just as we want to know which quarterbacks are due for a bounce back in touchdown production, it’s worthwhile to pinpoint the kickers on offenses that gained a lot of yards in 2018 but didn’t generate the field goal opportunities we’d expect. Kicker opportunity, like all other positions in fantasy, is all that matters. Accuracy doesn’t matter. Long-kick acumen doesn’t matter. Wind sorta matters, but only in extreme circumstances.

Below is a rundown of the 10 teams that scored the highest percentage of red zone touchdowns in 2018. You’ll notice this list includes both good teams and horrid teams because well, the latter group was often forced to forego field goals while facing massive second-half deficits. Field goal attempts are a luxury for the elite.

Kickers on the good or decent NFL teams listed below—the Seahawks, Saints, Colts, Steelers, Chargers, Chiefs, and the Browns for the season’s second half—should have had more field goal tries in 2018.

All of these teams posted red zone touchdown rates well above the league median of 59.5%, which was unusually high—about 6% higher than it has been in recent NFL seasons. If these teams regress toward that median in 2019—scoring fewer touchdowns inside the 20-yard line—their kickers will get the chance to put up bigger fantasy numbers. For kickers attached to elite offenses—the Saints and Chiefs come to mind—this could translate to gaudy fantasy production in 2019.

Visualizing the data might help. I’ve created a handy little graph showing how many yards these teams gained per field goal attempt in 2018. Compare the below data to the Texans trying a field goal for every 138 yards and you’ll see just how many field goal attempts these teams could post (while figuring that some teams will remain aggressive in the red zone).

The league average over the past two seasons is one field goal try for every 166.5 yards gained. 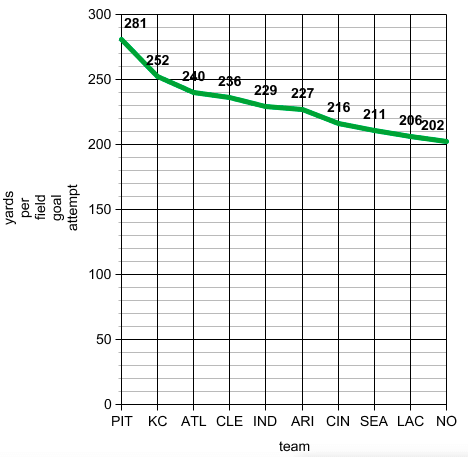 Last year was a total debacle for Chris Boswell, who signed a big contract with Pittsburgh, then promptly shanked seven of his 20 field goal tries. It was the stuff of eternal cringing. But let us not forget Boswell had a hefty 38 field goal tries in 2017, as the Steelers attempted a field goal for every 159.2 yards they gained. Unless the Steelers stink this year without Antonio Brown and LeVeon Bell, expect the Boz—or whoever is kicking for Pittsburgh— to have far more opportunity. The Steelers would have tried 38.7 field goals in 2018 if they had hit the league attempt-per-yard average.

Harrison Butker was stunningly unlucky and managed to finish as 2018’s fourth-highest scoring kicker. He proved to be a top-end kicker option with a meager 27 field goal attempts. A very nice 69 extra point attempts helped smooth over that week-to-week field goal inconsistency. Butker would've posted 40.9 field goal attempts if the Chiefs had hit the NFL average for yards per attempt. I’m fairly confident in any kicker attached to Patrick Mahomes’ offense; Butker (or Goatker as he’s colloquially known in my Twitter mentions) is no exception. If the KC offense regresses in the red zone this year, Butker is a no brainer candidate to finish as fantasy's No. 1 kicker and could top kicker scoring by a wide margin.

It’s always Lutz szn, as the kicker truthers know, and that won’t change in 2019. Lutz was No. 3 in kicker scoring last season with New Orleans dominating in the red zone. Just imagine if the Saints sputter inside the 20 every now and again, giving Lutz far more than the 30 attempts he had last season. The Saints, for what it’s worth, averaged one field goal try per 173.8 yards in 2017, when Lutz finished with 36 field goal attempts.

Giorgio Tavecchio, who likely won’t be drafted in most 10- and 12-team leagues, is clearly a candidate to finish 2019 as one of fantasy football’s highest-scoring kickers. It was only two seasons ago that the Falcons attempted 39 field goals, with Matt Bryant finishing as the No. 3 kicker in fantasy. Bryant is gone, replaced by Tavecchio (Goatvechhio), who was a Monday night hero last year when he drilled three field goals and two extra points against the Giants in Week 7. Atlanta had the third worst yards-to-attempt ratio in 2018, in part because the team was often chasing second-half touchdowns. If the Falcons are slightly less bad in 2019, Tavecchio should be due for considerable opportunity as Atlanta’s starter.

C.D. Carter is the owner of DraftDayConsultants.com, co-host of the Living The Stream podcast and author of "How To Think Like a Daily Fantasy Football Winner".

More from C.D. Carter
Most Popular