Analyzing the prior week's results is one of the most valuable investments of your time as a DFS player. In this space, I will deconstruct the winning lineups from FanDuel and DraftKings' biggest GPPs, as well as note other important DFS takeaways from the past week. 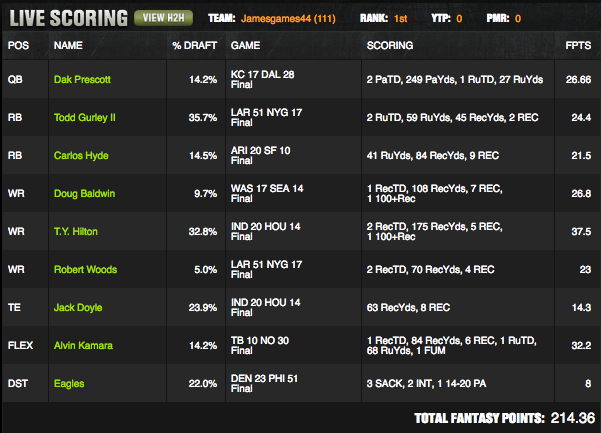 Jamesgames44 took down the Week 9 Millionaire Maker with a balanced lineup featuring no player over $8,100 and no non-DST under $4,300. The lineup was also relatively chalky—the 172.0% total ownership was the second-highest this season and greatly eclipsed the total average ownership in winning Millionaire Maker lineups of 100.6% coming into Week 9.

Given how chalky the lineup was, the leading indicators for the players contained within shouldn’t come as much of a surprise to you if you’re a 4for4 DFS subscriber: Dak Prescott carried our top projected value ranking among QBs on the slate; Todd Gurley, Alvin Kamara, and Carlos Hyde were ranked second, fifth, and seventh, respectively, in GPP odds; Doug Baldwin ranked third among all WRs in GPP odds, and T.Y. Hilton ranked first among WRs under $5,000 in GPP odds; Hilton’s teammate, Jack Doyle, ranked third among TEs in GPP odds (behind Travis Kelce and Trey Burton, who were each fine plays in their own right); and the Eagles DST ranked first in GPP odds at the position, and was going against a Broncos team rated as the best matchup according to aFPA. Simply put and undoubtedly easier said than done, but you could have essentially gotten eight-ninths of the way to this lineup by attempting to maximize GPP odds (available to DFS subscribers via our GPP Leverage Scores page).

Note the two stacks in this lineup: Gurley-Woods and Hilton-Doyle. Both stacks didn’t contain a QB, instead investing in two skill players on offenses that had big days.The Gurley-Woods stack was an investment into the league’s highest-scoring offense against a floundering Giants defense, while the Hilton-Doyle stack was an investment into an offense going against arguably the league’s worst defense. If you’re not familiar with the merits of RB-WR stacks especially, be sure to check out my published research on stacking.

If you were among the 95.0% who didn’t own WR Robert Woods, how could you have landed on him?