Raybon's Review: What We Learned From Week 8 DFS on FanDuel & DraftKings 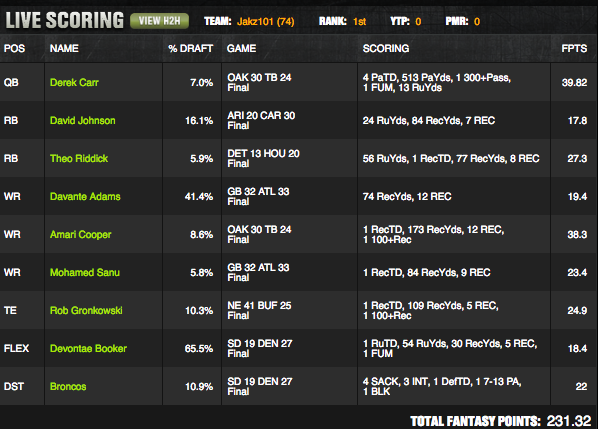 Jakz101 took down the Week 8 Milli' Maker by nailing the two highest scoring players of the week, Derek Carr and Amari Cooper. As we know from The Definitive Guide to Stacking on DraftKings, opposing passing games are correlated. While 41.4% of the field was on Mike Evans and 20.9% of the field was on Jameis Winston, Jakz101 pivoted to the correlated pairing of Carr and Cooper at a fraction of the ownership.

As if you needed a reminder to always pay attention to breaking news and utilize the late-swap feature, it looks as if Jakz101 swapped from Ty Montgomery to Davante Adams, as this lineup has $400 left over that would have allowed him to fit in Montgomery's $5,300 salary in place of Adams. Once Montgomery was ruled out, Adams and Jeff Janis both became top-three values (along with J.J. Nelson, who also crushed it and shows the value of implementing 4for4's projections into your process).

You're Missing Out!
A DFS subscription includes:
UPGRADE
Already a subscriber? Log in?
About Author