If there's one thing that we've learned in our decades of experience playing fantasy football, it's that consistently accurate preseason and in-season rankings are the foundation for success.

We're proud to have John Paulsen, fantasy football's most accurate expert, on staff, working hard every day to provide our subscribers with the most accurate rankings and projections available. 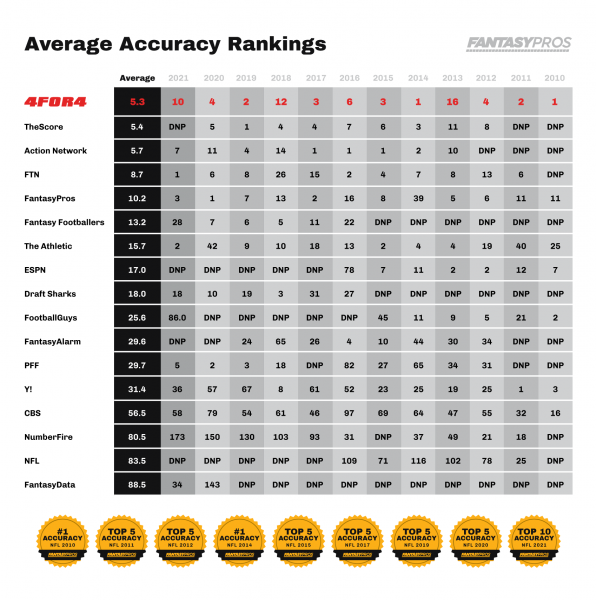 According to FantasyPros, no one has been more consistently accurate than Paulsen, who has finished inside the Top 10 in 10 of the last 12 seasons.

Owner Josh Moore finished in the FantasyPros Top 5 in both 2010 and 2011, an impressive feat, while finishing second to only John in the 2011 FF Librarian/FSTA preseason rankings study. In 2012, Josh turned the 4for4 rankings over to John so that he could develop other areas of the site, though the two continuously discuss the rankings throughout the season.

Our forecasting process places emphasis on offensive tendencies, strength of schedule and player talent via predictive modeling. This process allows us to effectively deliver fantasy football results that are measurable, objective and consistently replicated, and our success in the various accuracy studies only confirms that we're good at what we do.

By becoming a subscriber, you'll be able to draft and manage your team with the confidence that you'll have the most consistently accurate rankings at your disposal.