Raybon's Review: What We Learned From Week 17 DFS on FanDuel & DraftKings 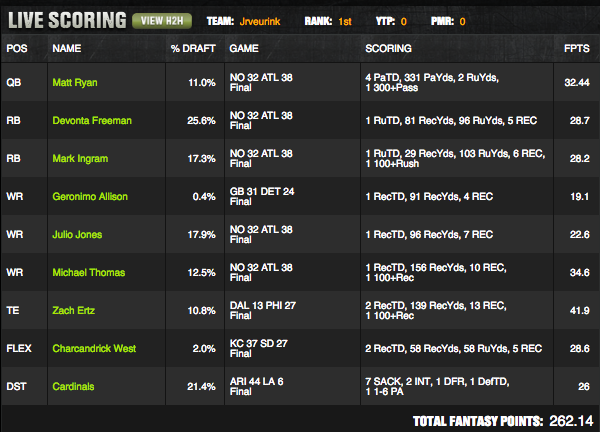 Congrats to Jrveunik, who took down the Week 17 Milli' Maker thanks to a Matt Ryan-Devonta Freeman-Julio Jones stack. While still not as popular as QB-WR stacks, QB-RB and QB-RB-WR stacks can be viable options, as frequent 4for4 readers will know from The Definitive Guide to Stacking on DraftKings. The Falcons had an eye-popping team total of 32, so it made a lot of sense to stack the three most involved players on their offense. Coming into Week 17, Ryan and Freeman had been responsible for 44 of the Falcons' 53 offensive TDs (83%), or 2.93 per game. Jones came in averaging 101 yards per game. Freeman was arguably the second-best RB play besides David Johnson, and Freeman's ownership may have driven down by that of Jones and Ryan.

Of course, Saints-Falcons had an over/under above 56, the highest of 2016, so jrveurink didn't just stop at the Falcons offense, he employed a full-on game stack, rostering Mark Ingram and Michael Thomas, the Saints' leading two-per-game TD scorers coming into Week 17.