Raybon's Review: What We Learned From Week 15 DFS on FanDuel & DraftKings

Analyzing the prior week's results is one of the most valuable investments of your time as a DFS player. In this space, I will deconstruct the winning lineups from FanDuel and DraftKings' biggest GPPs. In this week's intro, I will discuss how we can better use the different parts of our brain when making lineup decisions. This discussion will take the place of the "Quick Hitters" section which normally appears at the end.

In every Millionaire Maker winning lineup over the past two years, there has been at least one player owned 5.8% or less. These contrarian selections aren't always logical, but that doesn't mean they aren't intuitive. In a 2012 blog post, doctor/author Deepak Chopra writes:

You can use your mind to rewire your own brain in a manner that routinely accesses and elevates your intuition. You just need to make the conscious choice at every moment keep track of what part of your brain is dominating at any moment, instinctive (reptilian), emotional (limbic) or intellectual (neocortex). Once you have done so, simply tone that part down and find balance. And, now intuition can once again be accessed.

As I read that, it hit me that letting a particular part of the brain dominate is what sabotages many DFS tournament lineups. It became clearer after reading the example Chopra gives:

Instinctive: “I’m hungry. I want to eat that banana cream pie and fill my belly”

Intellectual: “Can I afford the calories in that banana cream pie?”

Intuitive: I have a feeling that if I eat that whole slice of pie, I am not going to feel very good!

Here, the instinctive and emotional brain would both lead you to make an unhealthy choice, while the intellectual brain's approach leaves the door open for you to rationalize an out ("Yes, I can afford the calories"). Only the instinctive brain sums things up correctly: it looks at how you'll feel in the future, not just the present, and subtly provides a compromise by telling you that eating the whole slice may be a bad idea, i.e., the best course of action may be to have a few bites just to curb your hunger/craving.

That may have made you hungry, but also serves as an important lesson in how you create tournament lineups. Let's use Brandin Cooks last week as an example:

Instinctive: Cooks has been tough to predict, might see Patrick Peterson in coverage, and may see less targets with Michael Thomas back.

Emotional: Cooks burned me with a zero at home, so I'm definitely not using him on the road.

Intellectual: In his career, Cooks averages just 63.5 yards and 0.35 TDs on the road, compared to 84.0 yards and 0.73 TDs at home, therefore he is a poor selection when playing on the road.

Intuitive: There are numerous factors working against Cooks, which will drive his ownership down -- likely to sub-5% levels -- despite him being at his lowest salary of the year. While all the concerns about Cooks are valid, there is also the possibility that Peterson covers Thomas or Arizona plays a lot of zone, allowing Cooks to go off. There is also the possibility that given the high over/under and close spread, the game shoots out. With a relatively small investment, such as putting Cooks in 1-in-10 lineups, I could double or even triple my exposure to Cooks relative to the field. I would be giving myself access to one of the highest-upside players in the league while taking only a small risk.

This concept is very important because consciously balancing the parts of your brain involved in your decision-making process is what could ultimately put you over the top in your DFS career.

While the emotional brain will probably lead you to the most errors, such as basing the decision of whether or not to use a player on how he performed the last time you used him, the instinctive and intellectual brains will undoubtedly lead to success at times, prompting you to continue to let them dominate, while not ever truly accessing your intuitive brain.

For example, many DFS players make sound, data-driven decisions. Letting their intellectual brain dominate may regularly get them on six, seven, or even eight great plays in a lineup. Others are avid film-watchers or football fanatics, whose instinctive brain will do the same. These DFS players may feel they're close to taking down a tournament, and therefore continue to let the dominant part their brain continue to dominate even though it would be in their best interest to become aware of the imbalance and modify their process.

The intellectual or instinctive brain will rarely, if ever, get you to the perfect nine plays necessary to put yourself in position to take down a large-field GPP, because as I mentioned earlier, there is usually at least one play in every winning lineup that almost no one thought of. This is why it's important to balance out the three parts of your brain and access your intuitive brain for at least one of your selections. This will often lead you to use a player who your instinctive, emotional, and/or intellectual brain will be uncomfortable with...until that player wins you a boatload of money. 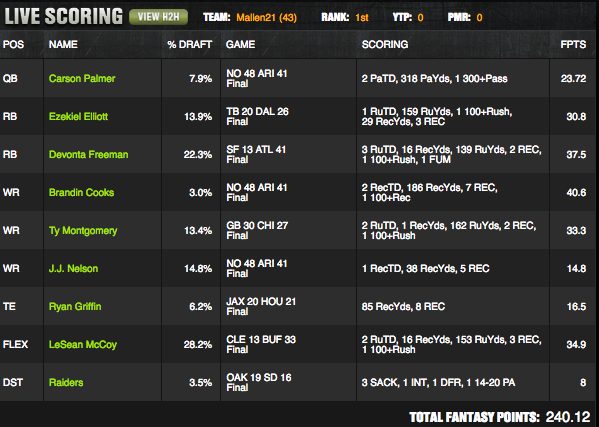 Congrats to Mallen21, who took down the grand prize thanks to Brandin Cooks' slate-leading 40.6-point performance. I already discussed Cooks in the intro, so I'll break down the rest of the plays now.

Coming in to the week, it was obvious that most of the slate's top plays were at RB. While many users opted to build around either David Johnson or Le'Veon Bell, Mallen21 went with Ezekiel Elliott, LeSean McCoy, and Devonta Freeman, who were all in good spots as home favorites. In addition to being cheaper, all three also had lower ownership than both Bell (32.4%) and Johnson (28.7%). This allowed Mallen21 to get more of a unique roster construction while still playing to the strength of the slate.

Carson Palmer was a home favorite in a game with a high total going against one of the worst pass defenses in the league and made for an excellent leverage play off David Johnson. Palmer came within 3.1 points of Johnson, but cost $4,100 less. The TD to Nelson was just enough to give Mallen21 enough points to win (he also dropped what would've been a 56-yard TD). It should also be noted that a correlated passing game stack was used by pairing Palmer and Nelson with Brandin Cooks.

I'm actually somewhat surprised Ty Montgomery wasn't more highly owned (he was 32.6% in the 4for4 Championship). I'm guessing the plummeting over/under due to the weather kept his ownership down despite word that he could potentially see 20 carries.

Ryan Griffin provides a good example of why stacking doesn't always work out. Many people would have stacked Jermaine Gresham with Palmer here, but Griffin outscored him by 9.3, which proved to be pivotal.

The Raiders were actually one of the D/STs I suggested in last week's DraftKings GPP breakdown. The Chargers came into the game leading the league in turnovers and had one of the worst DEF aFPA in the league. 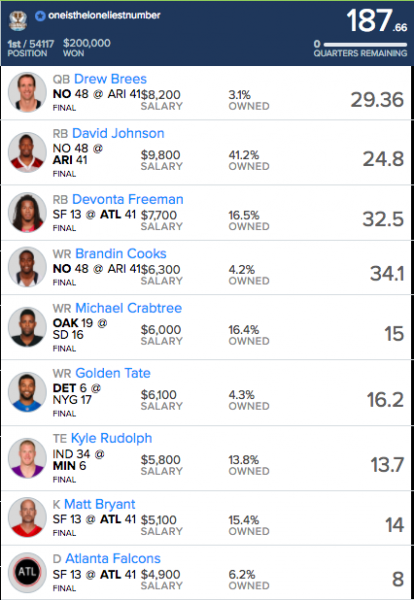 Congrats to oneisthelonliestnumber, who took down the Sunday Million with a Brees-Cooks stack. Similarly to Cooks, there are many reasons that point toward not playing Brees on the road, but low ownership, a high total, and Brees being one of the best QBs in the league would have been the contrarian case.

Michael Crabtree was a popular sharp play with Chargers' standout cornerback Casey Hayward expected to shadow Amari Cooper. Crabtree paid off with an epic sideline catch where he left a sliver of blue between his foot and the chalk.

Golden Tate is an example of how the natural variance of the NFL can work in your favor. Tate had been receiving a high amount of targets, but was in for a tough matchup with Janoris Jenkins. Jenkins got injured, however, and Tate promptly got loose for a 67-yard gain en route to an 8-122 line.

Kyle Rudolph had a great matchup against a Colts defense that is generous to TEs.

The pairing of Matt Bryant and the Falcons defense netted 22 combined points. Kicker-D/ST stacks are as positively correlated as any QB-receiver stack besides QB-WR1.