Raybon's Review: What We Learned From Week 11 DFS on FanDuel & DraftKings 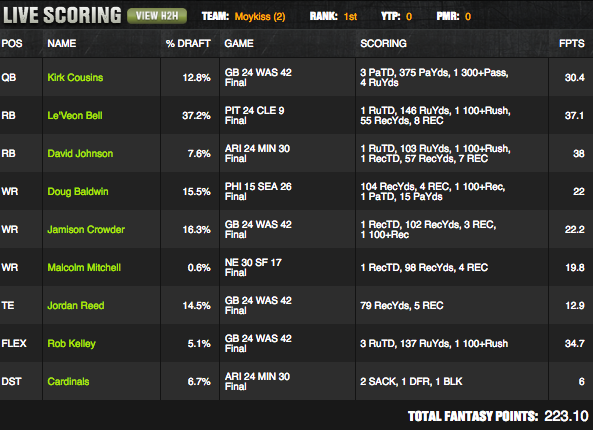 Congratulations to Moykiss for taking home the million in what is one of my favorite rosters from a lineup construction standpoint all year.

In deciding who to pay up for, MoyKiss went with the two non-QBs with the best projected point-per-dollar values, LeVeon Bell and David Johnson: 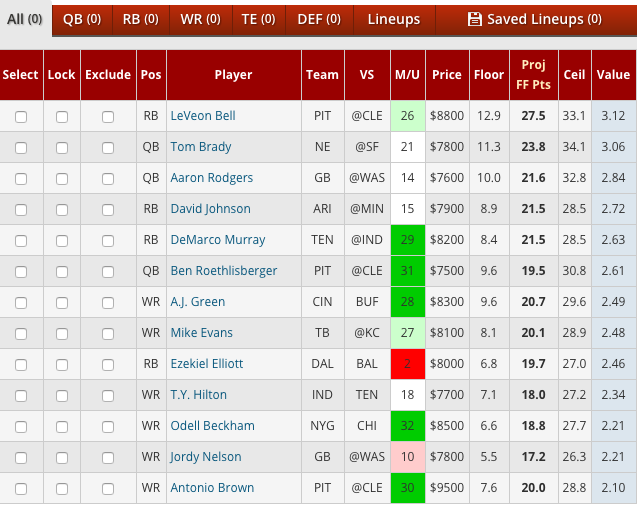 While Johnson went only 7.6% owned, more expensive players with lower projections were much more common: Odell Beckham (15.6%), Mike Evans (13.2%), A.J. Green (12.1%), Antonio Brown (10.2%), and Ezekiel Elliott (8.9%). While it is true on one hand that we're looking for top-end upside more than value with studs, it is also true on the other hand that studs are the riskiest investments in terms of salary expenditure. We can only afford so many of them, so we still want to keep in mind their value relative to alternatives in the same price range.

Another thing about the Bell-Johnson backfield combo worth noting is that this season, we've seen a resurgence in the viability of spending up at RB to win tournaments. LeVeon Bell, David Johnson, Ezekiel Elliott, DeMarco Murray, and Melvin Gordon have been three down workhorses all season, and since they've all managed to stay healthy, we've seen them all in winning lineups at high price points. This differs from years past when it seemed like most of the league's three-down backs would inevitably miss large chunks of the season. WRs still have more top-end upside than other positions this season (six of the ten highest-scoring games on DraftKings have been from WRs, with two from QBs and RBs alike), but the sheer predictability of the stud RBs can offset that to some degree.

At QB, he went with Kirk Cousins (our No. 2 QB value on the main slate) and then let Cousins dictate three other spots in his lineup, with correlation plays of Rob Kelley, Jamison Crowder, and Jordan Reed. I explored the concept of stacking multiple teammates and including the RB in the stack in the offseason and concluded that these stacks can be viable and tend to be underutilized. The Packers defense had been decimated by injuries and had given up 30+ points in three straight games coming into Sunday night, so stacking four players against them -- especially four players under $6,000 that cost $5,375 on average -- was a sharp move. It's also worth noting that Moykiss wasn't deterred by weather concerns in Washington.

Rob Kelley is a win for the "volume over efficiency" and "play RBs on home favorites" processes. Kelly wasn't a good bet for efficiency, as the Packers were allowing just 3.53 yards per carry coming into the game. Truth be told, Kelley wasn't very efficient for most of the game -- beyond a breakdown that lead to a 66-yard run late in the game, Kelley's other 23 carries netted just 71 yards (3.08 YPC). However, Kelley had received 21+ carries in each of his last two games, and that volume is incredibly valuable at a price of just $4,400. The more volume a RB gets, the more likely he is to be on the field in situations near the goal line, and sure enough, his three TDs came from one, four, and 10 yards out. Historically, home favorites score more rushing TDs than road favorites or underdogs regardless of location.