Last week, I examined rookie tight ends to see how often they “hit”. The results were that, outside of Rob Gronkowski, rookie tight ends are virtually never usable for fantasy purposes. In this study I’ll analyze tight ends who have impressed in their sophomore season and discuss rookie stats that might be predictors for second year breakout candidates.

For this exercise, I went back 10 seasons and divided second year tight ends into the same tiers that I divided the rookies into, with the same baselines:

The “hit” rates for second year tight ends that played in at least 10 games are as follows:

A reasonable hypothesis here is that if a team is willing to stick with a young tight end after his rookie season, and keep him on the field, he is likely to offer at least some fantasy value, especially in deep leagues. If there is no predictive value from their rookie seasons other than that a player might play a lot, this information is nothing more than an answer to a trivia question.

When dissecting the rookie seasons of successful second year tight ends, the most obvious stat at first glance is targets. Of the 27 second year tight ends that finished as at least a low-end streaming option since 2005, 14 saw at least two targets per game in their rookie season.* Only eight tight ends since 2004 were targeted at least twice per game in their first season and failed to finish their sophomore campaign as at least a low-end streamer, and two of those instances were due to injury (Dwayne Allen, 2013 and Tyler Eifert, 2014).

* Both Travis Kelce and Jake Ballard sat out their rookie seasons.

Here’s a look at how the correlation between rookie tight end FP/T and a rookie's catch rate has steadily increased in strength in relation to second year fantasy scoring (Yards/Target has also increased greatly in strength, but has moved little in relation to other stats): 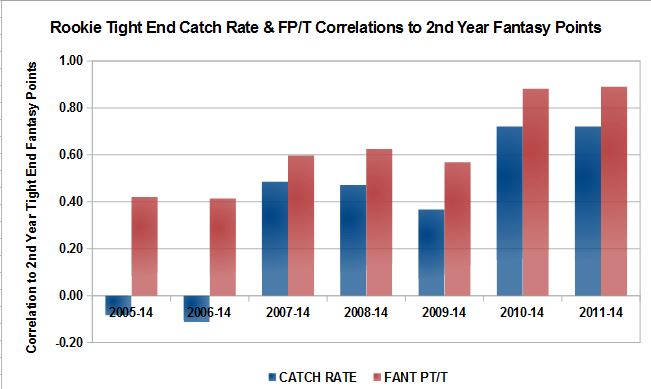 While the sample size does get smaller as we move toward more recent trends, the movement towards efficiency metrics as an indicator of tight end success is so strong that it’s worth taking into consideration.

If you look at the individual seasons in this study, the obvious point to debunk this theory would be the ridiculously efficient 2010 rookie seasons by Rob Gronkowski, Jimmy Graham and Aaron Hernandez, who all finished their first year with catch rates over 70% and over 2.2 FP/T.

When we remove these three players from the research, however, the strength of correlation between second year fantasy points and rookie season FP/T and catch rate actually strengthens at a quicker pace, along with touchdowns scored. 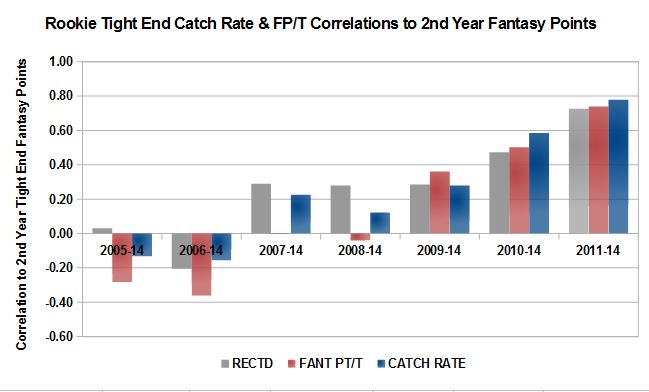 Explained non-quantitatively, what these numbers are trying to tell us makes sense. We already know that targets correlate most with tight end fantasy scoring. Rookies that show the ability to catch the balls that are thrown their way and also have a knack for finding the end zone in their first year are going to see increased opportunities the following season. As metrics become a bigger part of sports, in general, teams may be slowly moving towards efficiency as a deciding factor in who sees the field.

(One might argue that stats such as catch rate and touchdowns are functions of quarterback play, but this list of second year tight ends varied greatly in terms of quarterback quality.)

Going back through the 2014 tight ends, four rookies approached the production and efficiency metrics that are outlined here as the best predictors of second year success.

While no rookie tight end showed much promise as a touchdown scorer, the two second year tight ends with the highest expectations, Eric Ebron and Austin Seferian-Jenkins, underwhelm in the efficiency metrics.

Meanwhile, unheralded sophomore tight ends, Jace Amaro and Richard Rodgers stand out in both FP/T and catch rate. Amaro is one of just two rookie tight ends (Josh Reed) with a catch rate over 70% on at least 50 targets since the decorated tight end class of 2010.

Though Richard Rodgers didn’t get quite the volume in his rookie season that we’d like to see out of a second year breakout candidate, he did post FP/T numbers above average for tight ends turned fantasy starter in their second year. With Jordy Nelson out for the season, Green Bay is without their top receiving touchdown threat, and with Andrew Quarless’ status unclear going into the season, the door could be open for Rodgers to take on a bigger role in the Packers’ offense.

Studies
What is the Value of a Bench Player in Fantasy Football? Part II