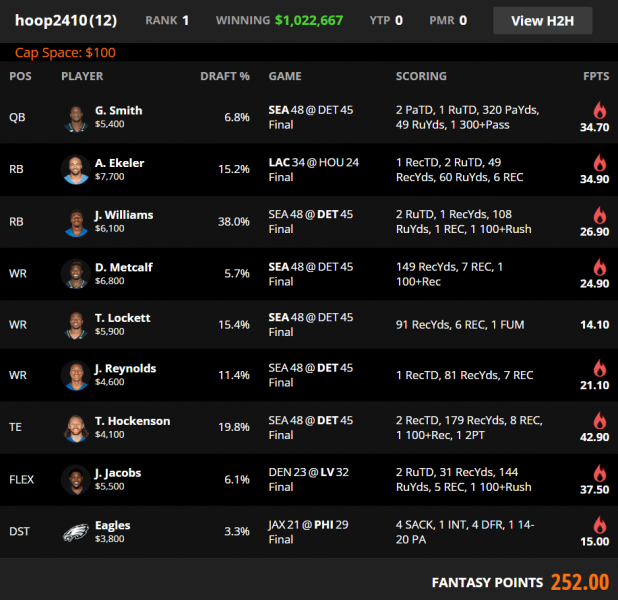 The 121.7% cumulative ownership in this week’s winning lineup was the highest for a Millionaire winner since Week 5, 2020.

This was already the second Millionaire winner in 2022 without a sub-5% player (not including team defense). That only happened once in 2021.

After the first three Millionaire winners in 2022 flexed a wide receiver, this week’s winner used a third running back. In last week’s DFS MVP podcast, John Daigle and I discussed the viability of 3-RB builds in DraftKings tournaments. While 29% of the field flexed a running back, 50% of top-1% lineups rostered three running backs.

Rather than leveraging off of the chalkiest plays on the slate, the Millionaire winner leaned into the most popular game and offset their high ownership with a unique six-player combo, bringing down the cumulative ownership with a 7% quarterback and 6% wide receiver.

Josh Jacobs proved to be the best price pivot on the slate, coming in at just 6% with a salary of $200 less than 40% Khalil Herbert. 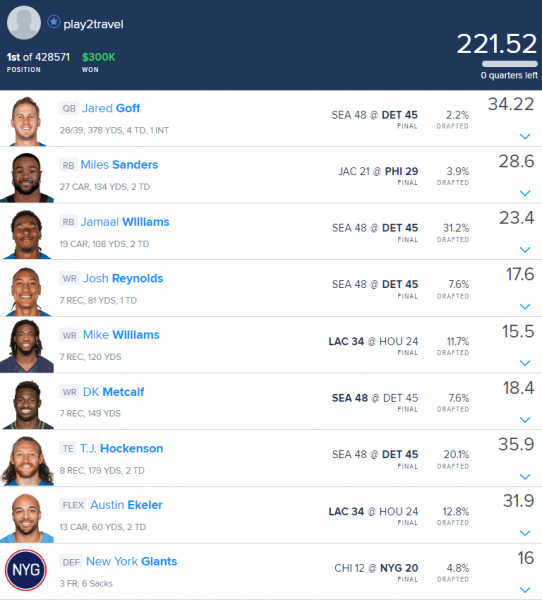 Despite having two players with ownership above 20%, this lineup wasn’t all that chalky. The 101.9% cumulative ownership was the highest of any Sunday Million winner so far in 2022 but nine winners in 2021 had higher total ownership.

Since Week 1 of 2020, no other Sunday Million winner has used five players from one game as this one did. This was only the second winner in that time span to use for players from one team.

Rostering two of the most popular players on the slate who were also teammates, this week’s winner offset that high ownership by including that team’s quarterback at 2% and a fourth Lions player at 8% as well as an 8% bring-back.