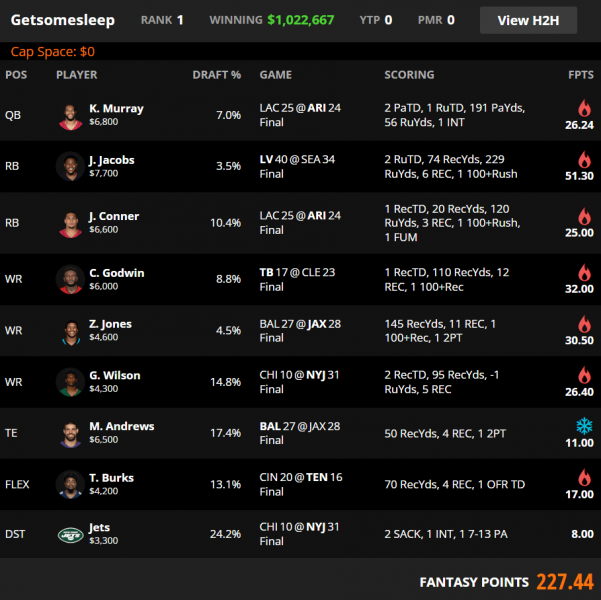 For the third time this season, the Millionaire Maker winner rostered a defense that was at least 20% owned. From 2019–2021, there were only four such winners.

Millionaire winners this season are averaging four sub-10% players and two sub-5% players, just as this lineup had.

The average cumulative ownership of winning Millionaire lineups this season is starting to converge on the historical average (107% from 2019–2021).

This was the first Millionaire winner in 2022 to stack a quarterback and running back from the same team and the second to play a quarterback without one of his primary pass-catchers.

Only two other Millionaire winners this season have correlated their defense with another player from the same team. Four other winners from 2019–2020 used a WR/DEF mini-stack.

Rachaad White was one of two players on at least 40% of rosters, making his teammate Chris Godwin a fantastic leverage play.

Josh Jacobs offered same-game leverage off of Ken Walker, who was the third-most-popular running back and in 28% of lineups.

Three players in the Chargers-Cardinals game had ownership of at least 18% while Justin Herbert was one of five quarterbacks on at least 10% of rosters, which helped a Kyler Murray-James Conner combination gain ground on the field. 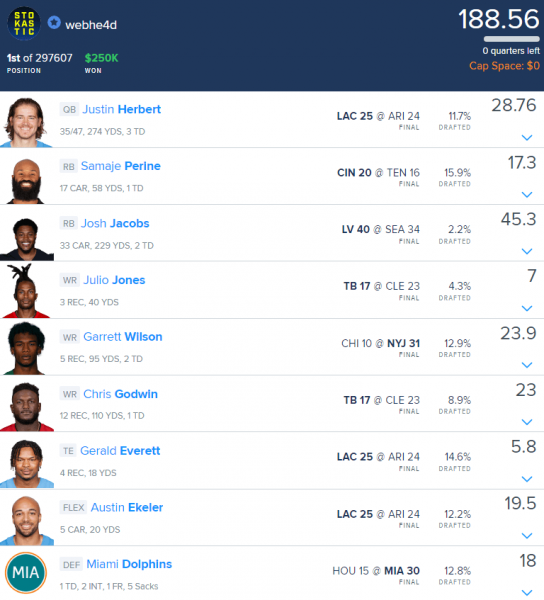 Despite having just three players under 10%, this lineup was more contrarian than the average 2022 Sunday Million winner—that was partially because it was the first winning lineup since Week 3 without a player above 20% ownership.

This was the second Sunday Million winner this season to stack a quarterback with his running back—over the previous two seasons, seven winners used a running back in their primary stack.

Only one other Sunday Million winner since the start of 2020 has stacked two wide receivers from the same team without that team’s quarterback.

Although Julio Jones had a pedestrian fantasy day, pairing two Tampa Bay pass-catcher led to a unique build in a week where Rachaad White was on 42% of rosters.

Ken Walker was in seven times as many lineups as Josh Jacobs in the same game.