Week 8 gives us four games with double-digit spreads, along with plenty of value to uncover for our picks. With just two teams watching from home, we’re back to having plenty to choose from.

With the help of TeamRankings' customizable tools and data, I’ll go over the best value picks for Week 8, along with the top suggestions for survivor pools. With this info, you should be able to make smart decisions in order to get back on track or keep you going if you’ve had a strong start to the season thus far.

It was another 4-1 week in this column for me, as the Rams, Packers, Patriots and Saints all came through with wins, while the Chiefs imploded and fell to the Titans.

This brings my season total to 23-12. Let’s press on to Week 8, where hopefully we find some more success in both pick'em and survivor formats.

Before I get into the picks, note that I’m not suggesting you should make all of the picks listed below. The best Week 8 picks for your NFL pool depend on strategy factors such as your pool’s size, rules and prize structure, plus situational factors like your current place in the standings and the number of weeks remaining.

However, these picks do provide some of the best opportunities to differentiate your Week 8 picks from your pool opponents, by taking on only a modest amount of risk, or no additional risk at all.

I’ve picked the Rams for two straight weeks. They say a third time’s a charm. L.A. has won both weeks so I’m not sure that applies here, but I am still picking them again in Week 8. The Rams are 14.5-point favorites against a Houston team that has only scored more than five points once in their last four games.

TeamRankings has the Rams at 86% win odds, with the public picking them 98% of the time, so you’ll win or lose with most of your pool.

Sometimes you have to take the easy pitch right down the middle and this week it’s the Bills. They are coming off their bye week, are at home and are facing a Miami team that has struggled to put it all together this season.

Vegas has Buffalo at 88% win odds with TeamRankings at 85%, and public bettors are rolling with the home team at a 99% clip. Once again, you will win or lose with almost the whole pool.

These two teams are trending in opposite directions and I’m backing the home team on its way up. This is a same-division dog fight with the Falcons playing much better coming into it. Atlanta is a field goal favorite with 60% win odds via Vegas and 55% at TeamRankings.

The public is taking Atlanta 81% of the time, which is high, but not as high as a game with the same three-point spread, Seattle, which boasts an 87% pick rate.

This should be a fun one on Sunday night and the spread is Dallas by 2.5 points. The Vikings haven’t been able to stop the run, while the Cowboys feature one of the best rushing duos in the league. Both teams are coming off a bye, but I think Dallas is just too powerful on offense with a solid enough defense to come out with the win on the road.

Win odds are only 55% in this contest, with the public picking Dallas 79% of the time. There’s value in taking the road team in this one.

This pick is definitely not appropriate for all pools. If you’re in a smaller, season-long pool, it’s probably not worth the risk. However, if you’re involved in a single-week contest or your pool has weekly prizes, it could be a contrarian way to go.

My upsets this season haven’t been hitting, but this week feels like an excellent time for it to happen. Pittsburgh is healthier and well-rested, while the Browns are having to Frankenstein an offense together. Last week, Cleveland found success with the run, but it will be much tougher sledding against the Steelers' front seven in Week 8. I see this as a low-scoring contest, but Pittsburgh should come out with the upset.

They are currently 3.5-point underdogs, with TeamRankings win odds at 35%. The public is only taking the Steelers 28% of the time, so this is certainly a contrarian way to go if the mood strikes you.

The last piece of the survivor pool puzzle is future value. If you fire off a powerful team in Week 8, you won’t be able to use them later. 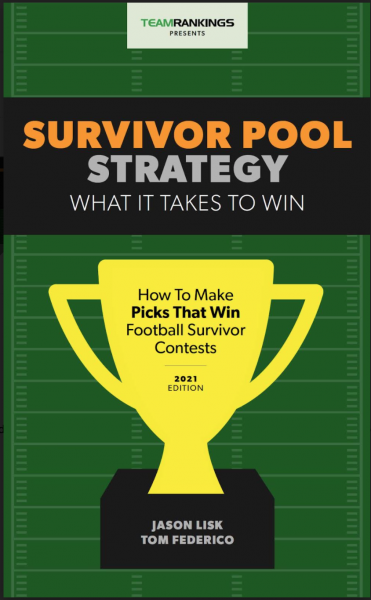