Joe Paeno and I will be teaming up this season in at least 10 mid-to-high stakes leagues over at FFPC. John Daigle put together an invite-only league that operates within the $350 mid-stakes tournament that FFPC offers.

A lot of our strategy and preferences are based on the rules of this league. It’s a TE-premium league which means they get 1.5 points per reception compared to one point per reception for other positions. You also start 1 QB, 2 RBs, 2 WRs, 2 FLEX, 1 TE, 1 K, and 1 D/ST every week. The structure of the season is also much different than your standard 12-team league. 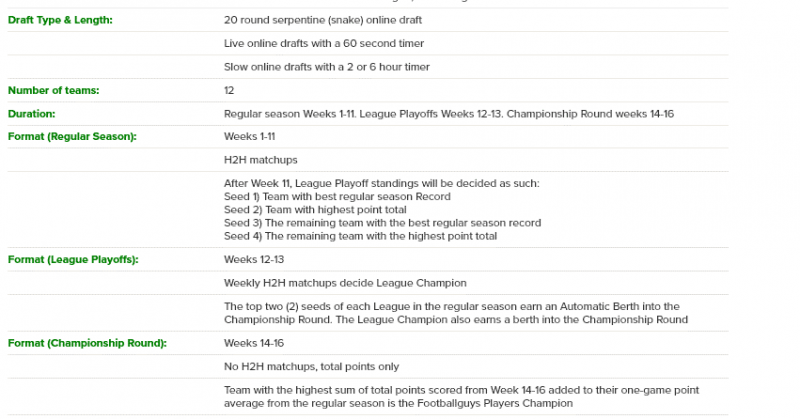 I know there has been a lot of talk about “upside” lately in the fantasy community. The truth is, it matters much, much more in leagues like this where only four teams make the playoffs, and most of the money is paid out during the championship rounds in Weeks 14-16.

Joe and I plan on doing multiple live-streams and a number of written pieces on strategy, targets, fades, and other pieces throughout the offseason geared towards this specific contest and the FFPC Main Event.

Let's kick it off with a review of the latest draft where I’ll go through our strategy for each pick in the first 10 rounds as well as the best value pick of each round according to contest-specific ADP.

We drew pick No. 6 and had been formulating our own board leading up to the draft. Of the players we thought would be available (not CMC or Saquon), we were looking at Zeke> Kamara > Cook > Kelce > Mixon. Joe thought there was absolutely no shot Cook would fall to us so we were really banking on either Kelce or Mixon. Luckily CJ (Team 4) took Miles Sanders which led to Cook falling to us. Even though the Vikings defense is bad and they will have to throw more, Cook will be involved plenty in the passing game and is one of the league's few true bell cow backs.

UPDATE: Dalvin Cook has recently announced that he will holdout unless he receives a “reasonable extension.”

He doesn’t have a ton of leverage as a running back but could potentially show up to training camp, then sit out for up to 10 weeks. According to the CBA in order for this season to “accrue” he only needs to be with the team for six games. The team can also waive all fines since he is still on a rookie contract and not considered a “veteran” yet.

It’s a dicey situation and for regular fantasy leagues, I will probably avoid him. In tournament-style leagues like this one I don’t mind some cheaper exposure as the risk has the possibility of a higher payout. Alexander Mattison should be prioritized as a high-upside pick in drafts.

It’s unfortunate news for Joe and I but luckily we added a few other high-upside running backs that could turn the tables.

Connor Allen utilizes advanced analytics and his knowledge of football to create an edge in sports betting and fantasy leagues. He writes a weekly player prop article that's won over 57% of the time in each of the past two seasons. He placed first and 10th in the FFPC Divisional Round Playoff Contest along with fellow 4for4 writer, Joe Paeno. Connor currently resides in Chicago where he owns a small business and can be found on twitter @ConnorAllenNFL.

High Stakes
These 4 Tight Ends Could Help You Win $500K